Before Decision-Making: Explosive Cocktails of Emotion 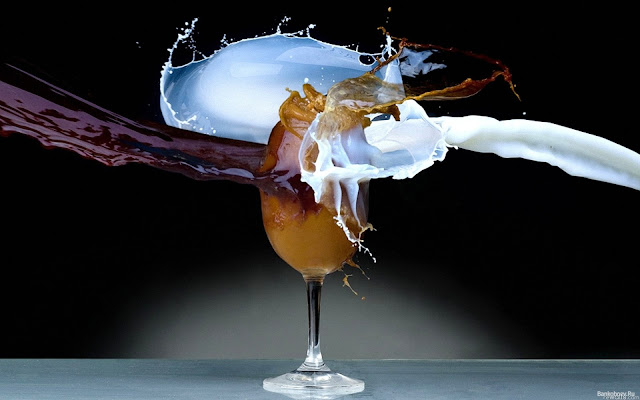 In one of the previous blog posts I noted how the news-stories wash over us incessantly bathing people in the emotional-narrative driven soup of the major broadcasters and tabloids. Evidently this serves a function which people feel a need for: The connection to the community and world within which they coexist and share and shape their expectations for life.


Legacy News-Media: No responsibility for sensationalism vs accuracy and training people to accept an unreality as the "norm".

For the concept of democracy to work, it hinges on the assumption that each voting adult who has made the successful transition from childhood as an independent decision-maker with a single vote to represent that, that such people are emotionally mature and rational. But if we compare the diet or environment within which voters exist, the above sensationalist news-media and the preference for people to seek pleasurable emotional stimulation even if it's "angry"; we can already see where this is going to lead to communication being impaired and reducing to people emotionally "venting": Sometimes nastily but invariably distracting away from building foundations of decision-making ie informing first.

Not only are people going to be less rational in their political discourse, they're equally reducing the complexity of understanding they are able to tolerate without feeling deprived of hyper-emotional presentation. The capacity to tolerate complex information itself is reduced. Just try reading some of the reports and papers that are primary source...

This may sound overly theoretical at the moment, but one look across "the pond" towards the United States of America and with the benefit of "outsiders' eyes" I think it seems very obvious how degraded their processes of democracy must be if we consider the communication of information to voters to aid their decision-making, even delusional on a mass scale, might appear by comparison to our standards? Now envision how the Chinese looking at the United Kingdom and wondering how poorly and chaotically do they run their political planning and policy to be able to effectively "run an entire nation"?! It may give pause for reconsideration of how we actually as opposed to apparently make decisions at a national level? There's so much grandstanding on "self-expression" (from Mill) and a "free press" and such little thought to extending BEYOND this beginning of democratic processes!! As if the beginning IS the process alone.

To bring the subject towards the focus of this blog: Brexit: Since we have had the decision, what is obvious is the ongoing attempt to emotionally digest it; from all corners and speakers

And I think this is perhaps of observation at a mass scale, in the confusion of the leadership or lack of it, in fact, of our political leaders concerning the permanent set of crisis operating across Europe concerning the EU, the EURO, Migration and Terrorism and how to politically deal with these things without a chain reaction due to the uncertainty vs confidence of our market economies.

Such explosive cocktails of emotion were deemed too dangerous at a national level by the original thinkers of the EU Supranational solution (Jean Monnet) almost one hundred years ago towards the ending of World War One. I notice our present analysts of the Referendum such as Matthew Goodwin has taken time to use the voting data to describe the obvious: "Britain is divided" along his preferential measures of Education, Age, Income Bracket, Metropolitican vs Rural for example.

From such studies many commentators come out with rationalizations: "People voted for Brexit because...".

Of fascination however, is this quote from Dr. RAE North at EUReferendum.com:-


Brexit: getting to grips with the issues 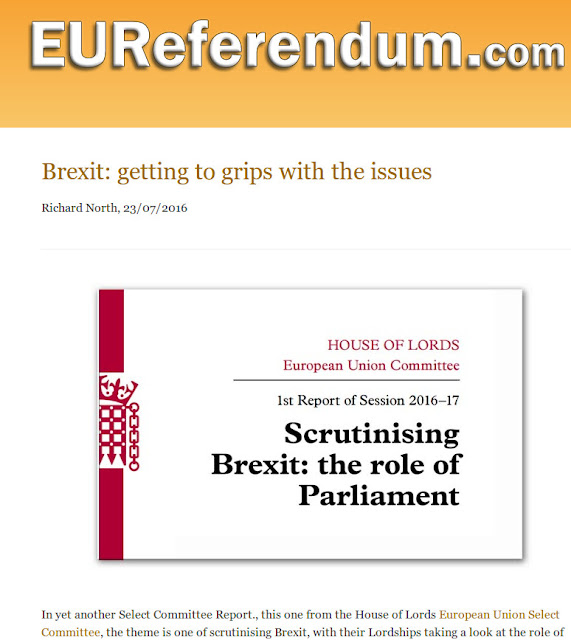 "The thing is, when we are dealing with something as important as a complete revolution in the way we are governed, with the health and wealth of the entire nation dependent on it, that is the sort of detail we should be looking at. To have a amateurs casually interviewing a few high prestige witnesses, simply to confirm the prejudices of the questioners, is a complete waste of time and effort.

Of course, we are so good at having prolonged inquiries after the event – the BSE inquiry, the Bloody Sunday inquiry, Leveson and, more recently, the Chilcot inquiry. At a cost of hundreds of millions, it seems no expense is spared in our attempts to find out why things went wrong. Why then should we not invest a little of that money up-front, in attempt to make sure that we do things right?

And, if Parliament can't hack it, it should move over and cede the ground to people who can do the job. We used quite frequently to have Royal Commissions to examine issues of substance, and their weighty reports used to fuel debates for years thereafter. If ever there was an example of a need for such a Commission, the post-exit reconstruction of Britain is one.

As it is, one cannot escape the impression that officials are flying blind and, outrageously to mix metaphors, are totally out of their depth."

The former in red is symptom of the investment in distractions due to the failure of using knowledge to promote decision-making capacity in place of "forceful personality" (see Blair-mania and the promotion of celebrity of our leaders: "The first lady or coloured candidate emotional-pleading narratives) and hence subsequently the loss of capacity in decision-making in light of new or alternative evidence.

Is it little wonder that Parliament emulates this "explosive cocktail of emotions" within the population when they bray like donkeys at each other? It's a show, a distraction which itself feeds most of the legacy news-media which in turn feeds itself based off the emotional needs of the population. The "house of workshop" (where decision-making is deliberated via structured and organized activity and rules for such (Parliament)) itself has become a fossil not fit for the work of policy and intelligence driven decision-making at a national and democratic level.

The latter in blue suggests that investment in decision-making behaviours themselves that demonstrate an encapsulation of "intelligence" will likely help the UK avoid the excesses (in red): But it takes a very conscious and very committed and finally very community-driven initiative to set such higher expectations for the entire UK. Pete North makes this point:  The revolution that never was:-


"Much of what is said by European leaders is for the time being merely political signals to their own electorates now that Hollande and Merkel are facing re-election. There is always a gulf between what politicians say and what is technically feasible.

In that regard, I will not be watching PMQs or even paying that much attention to the words of the EU commission. It will be in the back rooms and select committees where Britain’s fate is decided. That is where I will be watching. What I have seen thus far is not encouraging."


After a failure of decision-making we end up with the euphemisms of failure: "Mistakes Were Made". In fact no real communication produces such analysis of results as Matthew Goodwin above desperately attempts, like a blind man in the dark, to grasp the meaning of but never quite getting there: Only rearranging the data into interesting patterns. He's not alone, I listened recently to almost the entire Lords Debate on the Referendum on the BBC Parliament channel and not once did I hear the authority of attempting to first understand the EU, via using a history of it "The Great Deception" before attempting to use such a common ground to then promote discussion of Brexit from. You could hear a thousand different reasons, all as plausible and personal as the next and never come away with a deeper understanding. Not beginning correctly, and hence attempting to begin at the end and ending up with more emotional cocktails exploding... entropy of politics and the fear of the ruling order of "too much democracy" such as "Referendums are a scourge on democracy"!

But if we look at this argument, then I think it supports the idea for Brexit to ensure as much political decision-making concerning Article 50 is "automated" or "off-the-shelf" as is possible to MOVE BEYOND THIS EMOTIONAL BEGINNING and get away from it as successfully as possible via FLEXCIT: Stage 1. Failure to do so is very obvious presently in the discussions:-


Brexit: the consequences of failure 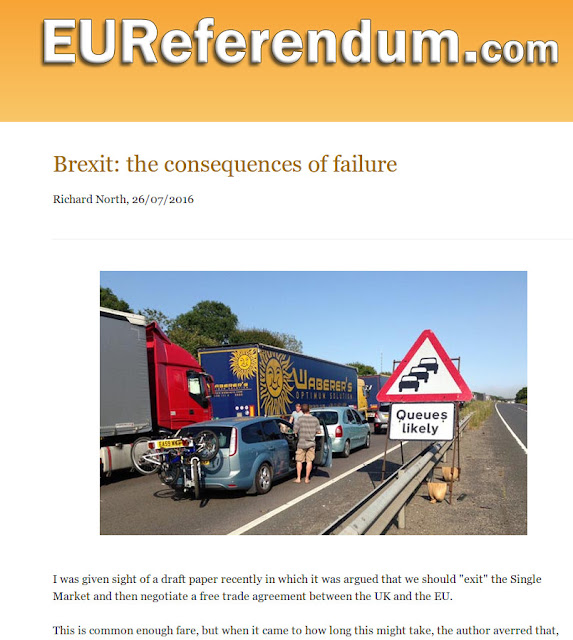 People like Nicola Sturgeon and Lord Lawson, it may be rationale to understand what role they are play-acting in their absurd demands and declarations from Brexit, but if you take the "model" of "emotion" before decision-making: This is indeed what they are playing at: They are playing and captivating and conditioning peoples' emotions to shape-decision-making political power. They are "beneath contempt" as per Dr. RAE North:-


"Handled properly, the benefits of Brexit for the UK could be huge, but there should be no illusions about the effects of a botched exit, based on this sort of insanity. We thus need people to stop playing fantasy Brexit and to focus on reality. We really cannot afford these games."

It's much less that democracy is a danger, for good democracy promotes good communication and hence good argument and hence good decision-making practice and indeed the experience of improving at this with more practice. It's our leaders who are the cause of and consequence of failure "we cannot afford these games" quite numerically and literally!

Posted by Red Cliffs Of Dawlish at 05:23