I Can't Believe It's Not Brexit! Can You? 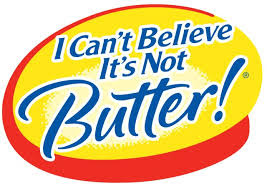 I am very cynical of advertising; a particularly good area of research on  sales techniques is Robert Cialdini's The Art of Influence, so much so GCHQ as part of it's online influence training/methods referenced this work iirc. Effectively the above is attempting to ensure their brand is remembered by you when you're shopping and swamped by choices of which "butter" to buy, you may have a tendencies to pick the brand on familiarity simply due to a default and low requirement to think about such a trivial choice.

The above I remember because it had a very annoying "Ear Worm Catch-Phrase" but also for me, margerine tastes nothing like butter! Where one tastes "organic" in the way vegetables or meat taste "organic", margerine tastes synthetic. Evidently it sells very well, perhaps due to "low fat" branding and "easily spreadable properties" so it has it's place and I'm not knocking it as a poor quality product, just that it's an imitation butter and I'd personally prefer be labelled as such:-


"is an imitation butter spread used for spreading, baking, and cooking. It was originally created from beef tallow and skimmed milk in 1869 in France by Hippolyte Mège-Mouriès, as a result of a challenge proposed by Emperor Napoleon III to create a substitute for butter for the armed forces and lower classes. It would later be named “margarine”.

Whereas butter is made from the butterfat of milk, modern margarine is made mainly of refined vegetable oil and water, and may also contain milk. In some locales it is colloquially referred to as "oleo", short for oleomargarine.

Margarine, like butter, consists of a water-in-fat emulsion, with tiny droplets of water dispersed uniformly throughout a fat phase which is in a stable crystalline form. In some jurisdictions margarine must have a minimum fat content of 80% to be labelled as such, the same as butter. Colloquially in the US, the term margarine is used to describe "non-dairy spreads" like Country Crock, and I Can't Believe It's Not Butter! with varying amounts of fat content."

What I'm trying to say here, is that advertising is the Art of the Plausible. As such there's a great deal of this in politics, where multiple viewpoints and values in modern secular societies are concerned. This may be "Popularity Politics", but it leads to an erosion of clear definitons and hence clear communication as per Communication: Shadows On The Wall (2) . 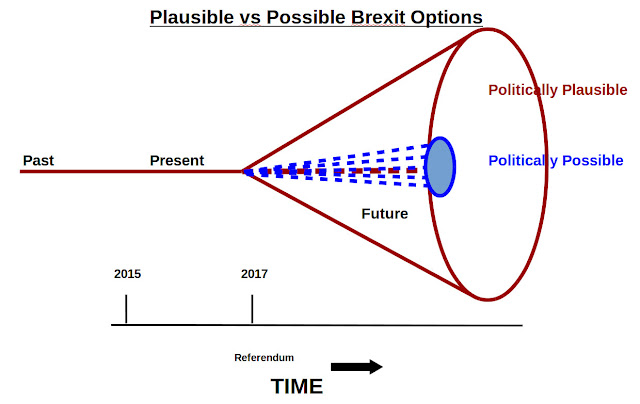 The stricter definitions of the words are:-

But in politics it boils down between Plausible and Popular Sounding to gain "Vote Share" (in whatever context (people/politicians/nations/etc) vs politically possible within the rules of for example Treaty Laws and the wider interrelations such as Market forces and as well within some scope of popular acceptability. As the diagram above attempts to illustrate there's a widening divergence between the the art of selling a political proposition and the actual political "product" itself. Like the above "margerine" it may advertise itself as equivalent to butter but it is not defined as butter technically!

And so it is with Brexit. Which I've defined very clearly and as simply as possible in Brexit For Beginners and elsewhere The Brexit Number and the EU Onion. The result of this lack of clarity is of course confusion as repeated numerous times for example: Understanding The Mountains Of Madness. We looked The Columbo Method: Norway previously and perhaps another detective can help when considering the Plausible vs the Possible:- 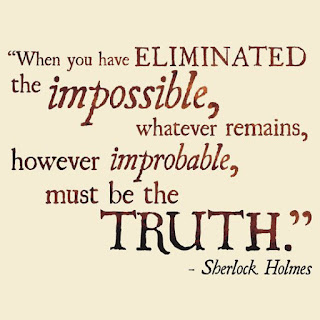 Brexit: When defined seems like a much less grand out-come than anticipated. But that's because it's merely the first step into a larger world.

To understand Brexit in terms of the difference between Plausibility and Possibility in Politics, FLEXCIT applies considerable definition of limitations ie demarcation between plausible and possible Brexit events and hence options. This is the grounding for The Market Solution:-


"Negotiators  will  have  to  deal  with  the  political  realities  of  the  day,  and  be forced to respond to the demands and limitations imposed on them."

"Compromise will not so much be possible as inevitable."

"We do not consider that it is possible to resolve all the issues arising from forty years of political and economic integration in one set of talks, or one stage."

"Estimates  cannot  be  any  stronger  than  the  validity  of  the  assumptions on which they are based. Weak assumptions, lacking a sound evidential base or not  rooted  in the  real  world, are  poor  foundations  for  any  plan.  Dazzling predictive    models    and    complex    calculations    cannot    remedy    inherent deficiencies."

"No solutions offered in respect of specifics are of any  value unless  they  fit with others  to make a fully integrated whole.  There  is  no  point defining  any one  policy  area  if  the outcome creates irresolvable problems  elsewhere.  Partial  solutions  are  not  an  answer.  An  exit strategy must  work  as  a  whole,  providing  the  best  fit  over  the  entire  policy domain – even  if  it requires  adopting sub-optimal  policies  in  some specific areas."

And much of the Legacy News-Media and "think tanks" stream of report after report about "What is Brexit?" including "Plausible Brexit Options" not appreciating the narrowing to "Possible Brexit Options", for example: British Influence: What Would Happen if the UK Voted To Leave or indeed another report it's similar to: Global Council Brexit: The Impact on the UK and the EU and there are endless numbers of these reports. The most interesting facet of them comes down to:- 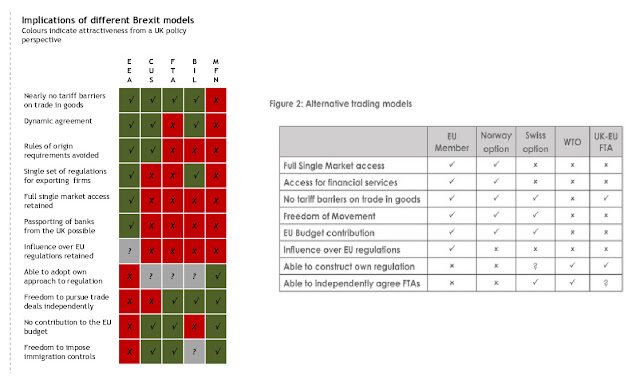 No doubt David Cameron's Association Membership "British Model" will be "much better/butter" (sorry about the pun!) than all? Well no not if it's a lateral transition not a vertical transition in redefining our relationship with the EU:-

So we come back to: British Influence: Ten questions that Brexit supporters need to be able to answer which LeaveHQ addresses, which draws from much of the answers to these questions already written in FLEXCIT: The definitive EU exit plan for Britain:- 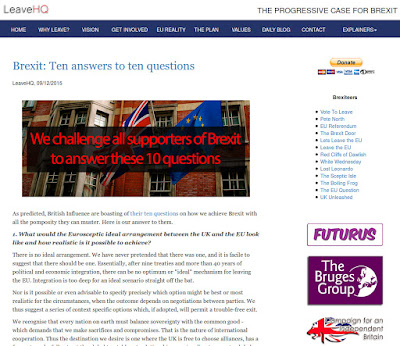 So feel free to read the more in-depth answers there. However, one of the important tasks of this EU/Referendum/Brexit debate is to organize information and increase understanding. A "war of words" or "wall of text" is an inhibitor to this outcome. So given the above use of conceptual understanding given above, to answer the questions in a way that presents the essence of A Science of Simplicity in which is asserted:-
Where Brexit defined =

Which means Brexit is merely x1 step, a single stage or Present Simple Event of change of Relationship Status of the UK with the EU qualitatively not quantitatively as component of FLEXCIT, the full process, itself. This incidentally is not wishful thinking: It mirrors the "Engrenage" and "negotiations" that are phantom of our Prime Minister David Cameron according to the EU Time-Table on Association Membership status (new relationship quantitatively not qualitatively) stretching from 2013-2017-2020+! 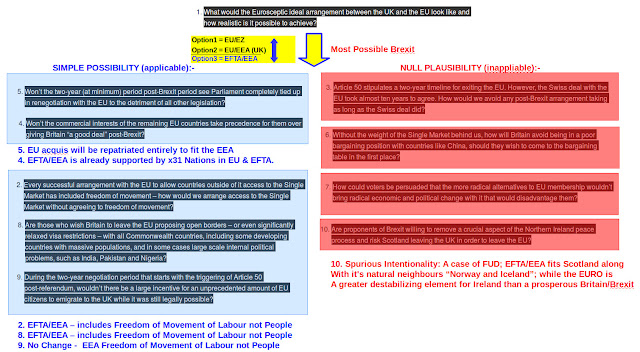 Here's the answer to British Influence. I've even appropriately organized the questions according to their categorization to help with clarity of understanding. What Brexiteers/Pro-Brexit Supporters need to do is understand that Brexit must be politically possible (which is much much smaller range of possibility than "politically plausible"), to then trigger democratic legitimacy and trump The Great Deception once and for all in Britain.

Posted by Red Cliffs Of Dawlish at 09:34