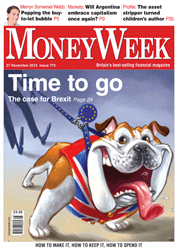 It's a relatively well-known phrase and a very effective in conveying strong sense and sensibility to dog-owners:

"You have to learn to speak dog, because dogs are not going to learn English."

"Sense" in the book means good judgement or prudence, and "Sensibility" means sensitivity or emotionality.

I've got to admit, I love talking about animals and one of the first Spanish phrases I learnt was "Mi encantera los animales", and sure enough by blog number 2, I've been expecting you... a rabbit had turned up, already. That said animals appear to be a very well represented form of metaphor, phrase and sayings and stories such as Aesop's fables and equally at home in politics as became noticeable in Learning Politics Can Be Fun! where I attempted to introduce the idea of "The Fluorescent Scorpion Test". So rest assured, reader, you won't find me "Kicking The Dog"! 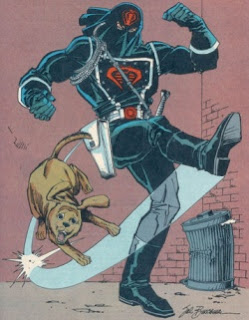 As you may be aware, one of the reasons for the above test was as per A Science of Simplicity. Yesterday I came across a book in a second-hand bookshop which I bought New Complete Dog Training Manual - Dr. Bruce Fogle which starts with some excellent simple advice:-

"There are a few easy rules about dog training: Keep it short, keep it simple, keep it fun - for both of you... Your objective is to reinforce the social relationship your dog should have with you."

After the last blog, Grand Strategy: Promotion, I'm not sure for that purpose I could come up with a more perfectly defined statement containing the core message of Pro-Brexit, in principle! In Strange Trails the first connection was made concerning the communication of our purpose form first principles: Happiness. But we also looked at where in the process in Referendums from "anticipation" to dissipation (positive or negative depending on how we define your purpose in the first place).

"In terms of our "no" campaign, with a little help from our friends, I have been gradually able to whittle down the essence of our "intellectual foundation" to three words: problem; solution; and outcome. Now mixing metaphors outrageously, I jump from foundations to three-legged stools. I liken these words to the legs of a three-legged stool. They effectively constitute our "offer" to the public, upon which we will ask them to vote "no"."

Fortunately a reference to Dr. RAE North's EUReferendum.com blog on "Foundations"; namely the very start of our journey was (puntastic!) fundamental to the above experience type. And it's the experience of people that is the rightful focus of politics as described in Power To The People; which we automatically fail at unless we establish Argument Abstraction.

The 3-legged stool idea is quite important above, in dog training it's "short, simple and fun," for my own computer programming learning I came up with "environment, tools, application" etc etc. But now talking directly about Brexit:- 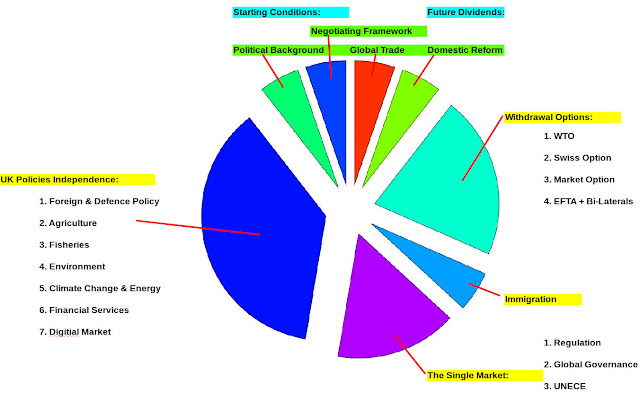 FLEXCIT = A Process of withdrawal from the EU

In Brexit For Beginners "withdrawal from the EU" was defined quite clearly as removal of representation in political institutions as "the price to pay" for removal of Treaty obligations of the UK in law as a member of the EU; via Article 50 Lisbon Treaty. This I think is a very powerful picture: In the above, the emphasis was on "reinforcing our social relationship your dog should have with you," as significant means to happiness in tandem with health and welfare as per:-


"Some of you know I'm a practising veterinarian, not a professional dog trainer. When I was starting out, I learned early on how important good dog behaviour is: It makes or breaks relationships between us and our canine buddies. I quickly realized that answering questions about behaviour and training was just as important as answering those about health and welfare."

I think this is a good way of simply asserting that the UK/Britain's relationship with the EU, it's "nature" is of critical importance on as equal a footing or if we diagnose the problem correctly: Of greater/greatest significance to our Referendum Question concerning whether or not we should leave or remain:-

At some stage I hope to take a dog-training course, as the best way to learn "to speak dog", but the above book provides some useful pointers and general examples to add to my own experiences which I presently apply when attempting to communicate with dogs and it tends to increase mine and the dogs positive experiences knowing some useful tips such as how to greet a dog properly, what it's body language/type of bark signals are communicating to you so that you can respond appropriately. Coming back to the above diagram of FLEXCIT: The Withdrawal Options Pie discusses the options of Brexit.

These options are ALL (without exception) Declarative "Brexit is... ." definitions, in answering "What Is Brext?" They are all FRAMED as Pro/Con declarations of variables along the lines of: Welfare of the UK vs Welfare of the UK in the EU. However, this requires a concept shift: Brexit's true frame of reference is >40yrs of EU Membership and hence "What Is Brexit?" depends on defining "What Is The EU?" as we defined in Brexit For Beginners. 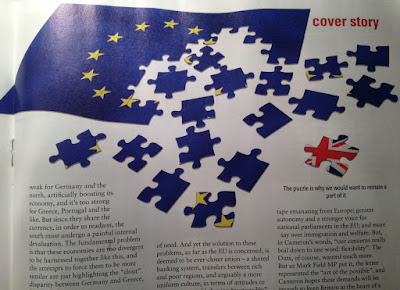 Brexit presented as a puzzle as to "where does the UK/Britain fit in?"

Effectively the real definition of Brexit is the relationship of the UK outside (extra) the EU Treaties which  apply to members represented in the EU political Institutions/Buildings. In all the Referendum questions the question of our "Relationship with the EU" is the defining variable. It is the central point of the argument as per Argument Abstraction. Here is defined the (1/3) Problem. I would encourage all arguments to assert that a history of the EU provides sufficient evidence of both "What is the EU?" and "What is OUR relationship with the EU?" under our membership?

What is very clear is that most of the debate and discussion hinges on the failure to define the problem of the EU via it's relationship status with the UK and hence in FLEXCIT the four sections on Brexit Options is the layer of confusion that reigns presently in the majority of communication on this subject.

In the above diagram taken from the article, whether or not wittingly or unwittingly, the author is suggesting something of his own mind and his own conception of Brexit (I suspect the actual picture is purchased from online where you can view it, to fit the magazine); whether or not such subtlety is incidental or emphatical, there's a lesson to learn here: When we communicate, our objective is to build "order" in our recipient's minds in a way that they understand, be it talking to one another, to dogs or to computers. I've spent some of my professional working life teaching children of different ages and you adopt different forms of communication with them; again with autistic children, significantly different communication is needed and so on. The above diagram provides a simple suggestion: Where does Britain fit in with the EU? The EU however itself is a collection of 28 members of different nations: Those other "pieces" should in fact be other national flags as part of the EU "puzzle". In fact a more useful diagram in my opinion is this one:-

The above shows communication "overhead" from different sized teams of programmers from Less is More: Jumpstarting Productivity with Small Teams by Steve McConnell, 1997:-

You can of course read more of this via the link, but it itself links to an article today via Lord Lamont in City AM:- 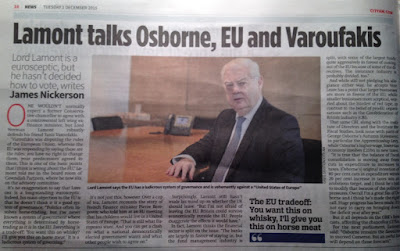 Lord Lamont uses another animal metaphor to make his point

"Politics often involves horse-trading, but I've never known a system of government where everything is determined by horse-trading as it is in the EU. Everything is a trade-off: "You want this on whisky? I'll give you this on horse meat."

This is the type of relationship we must have under the EU Treaties as the complexity of communication ramps up via the overhead of excessive political union. Remember in Legitimacy and Listening we looked at the extras involved in political governance:-

Cognitatively the EU is illegitimate as per it's foundations of Supranational governance; it's morally illegitimate as per it's Great Deception on preventing democracy in it's signing of EU Treaties and when there has been Referendums it's rejection of them along with the EU supporters, our politicians who's broken promises also compromise their moral guidance. And finally pragmatically the more we experience of the EU the more it is not "working":-
The political complexity generates great uncertainty systemically that cascades into the economies and policies of the members. But not only this; the huge huge overhead of communication and waste of our valuable prosperity: Lakshmi: Goddess of Prosperity (2):- 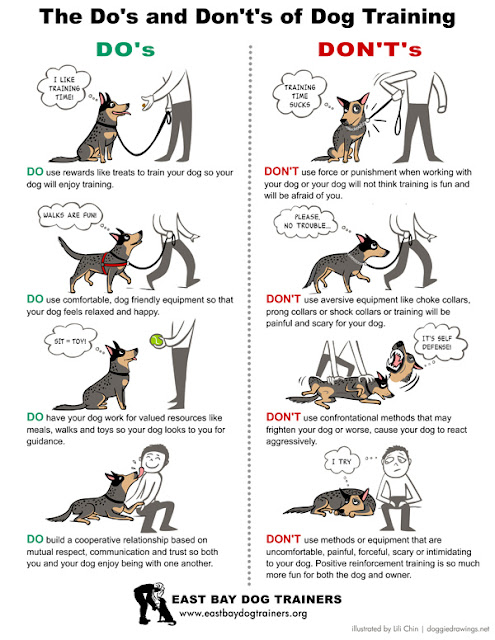 "Effectively people have to start trusting their own decision-making for their own lives, more than our politicians, otherwise they'll end up wasting yet more of our valuable time, our valuable attention and our valuable energy: The real roots of our prosperity."

I've seen so much low quality/deceptive/destructive communication on the EU and on Brexit and so much of it is a waste of time and words and often money.


In the next part I'll dig/sniff through the article in Money Week and despite the averred intention of the author to "leave" the EU, I'll explain why/how he's failed to communicate effectively and indeed possibly adds his own confusion and hence "communication overhead" to all mountains of the stuff as per Understanding The Mountains Of Madness.

Posted by Red Cliffs Of Dawlish at 16:41