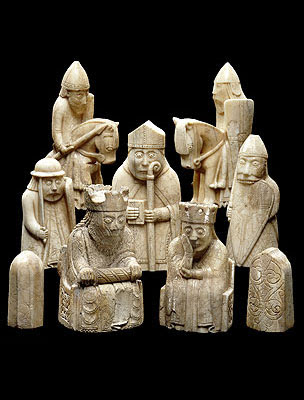 The Lewis Chessmen at The British Museum

The Lewis Chessman can be viewed at The British Museum apart from many other stupendous wonders. A brief description of them:-

"The Lewis Chessmen form a remarkable group of iconic objects within the world collection of the British Museum. They were probably made in Norway, about AD 1150- 1200. At this period, the Western Isles, where the chess pieces were buried, were part of the Kingdom of Norway, not Scotland. It seems likely they were buried for safe keeping on route to be traded in Ireland."

"The chess pieces testify to the strong cultural and political connections between Britain and Scandinavia in the Middle Ages, and to the growing popularity within Europe of the game of chess, the origins of which lie in ancient India."

These beautiful chess pieces are a nice segue from The Columbo Method: Norway. where we looked at the disparity between the strategy of the prestigious "King/Queen" pieces vs what the people aka the "Pawns" felt about The Norway Option. In fact as per these above chess pieces, people are more than happy with trade relations; so long as we remember the value of understanding our politics in a wider context and don't fall into the trap of narrowing the argument down via increasing the emotional pitch and pressure/compression as per Can we have our cake and eat it too? and How about a nice game of chess? 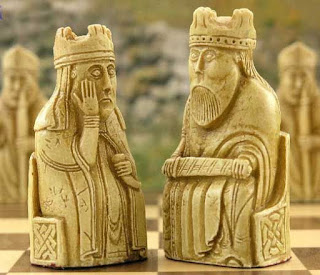 The Queen & King: The Yin & Yang of Power protecting Prestige

Dr. RAE North has blogged a series on politics categorized as "Strategy Ten" at EUReferendum.com. This is summarized in Strategy ten: summary and conclusion or indeed you can use the search or archive feature of that website or else google: [eureferendum.com: "....."]. For many people it's possibly too high-level considerations, the domain of the "Kings and Queens" of politics. And yet this is the real thing, what is reported as "strategy or negotiation" in the news-media is the equivalent of "Fool's Gold":-
An example would be David Cameron's so-called renegotiation which seems to have chopped and changed, from memory:-


Fool's Gold (Pyrite) Reporting in the Media:-
At each stage the News-Media has faithfully reported the "latest news" only for the "news" to magically change. In fact all that is happening is as per the strategy of Breadcrumbing the people along via the News reports. This strategy is all part of the theatre and projection of power to protect the prestige of the offices of Prime Minister and the offices of the other heads of government and the Institutional credibility of the EU as to it's legitimacy to authority and governance as per Legitimacy & Listening. 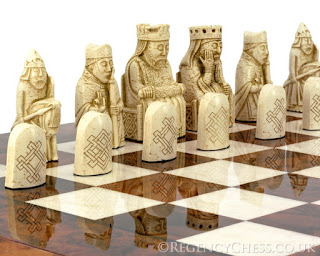 As everyone knows who's played chess: The "early game" has all sorts of openings usually with an emphasis on pawns and ensuring they are moved with economy of movement into formation. Their power is in their "cannon-fodder" quality (trading pieces for tractical positions) and their "numbers". In the EU Referendum the people are pawns and the current news-media reports are effectively placing the people into formation. One of the key early lessons I was told in chess was that commanding the "Middle Ground" was vitally important for maximizing position and movement options all around; influencing the rest of the board compared to the edges. For this reason, the rise of polling to try to coordinate these pawns into strategic positions has of course grown. Leave.EU: The Science Behind Our Strategy (Goddard & Gunster) has employed such methods via Cambridge Analytica as well as Stronger In Europe on both sides of the chess board (Black (pro-intergovernmentalism pawns) vs White (pro-supranationalism pawns) (goes 1st!)) to ensure they get the most out of their "pawns":- 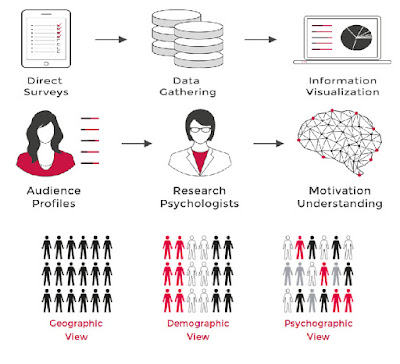 Application of the tools of data science to polling data

As we've seen with the control of the message from the media in I've been expecting you... ;  Fatal Car Crash: Two Dead After Car Accident and Understanding The Mountains of Madness ; polling seems the most appropriate way to influence voters in their millions through the filter of the News-Media, the Knights of the Legacy-Media with their ability to confuse and jump around deceptively and camouflage the next move:- 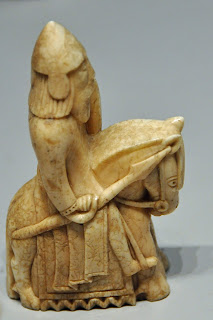 And of course to finally complete the Chess Analogy the power of the Castles of Big Business & Banks, the CBI and the big banks. Perhaps too little attention has been given to these pieces in this blog so far, apart from Lakshmi: Goddess of Prosperity (1) and Lakshmi: Goddess of Prosperity (2) and most of the politicians themselves, the Sweet-Tongued Bishops with their ability to come at you "sideways". 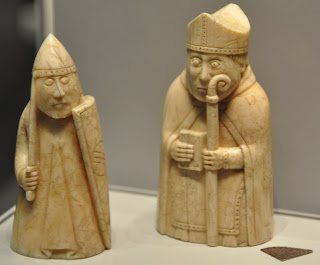 I've always thought how well these two work together projecting power from a distance: Castle (business/banks) and Bishop (politicians)

Despite all these powerful pieces, as any chess-player knows or quickly learns: Looking after your pawns, deploying them skilfully and understanding their strategic role is where the game is often won and lost: The fine margins long before the "end-game". And this is going to be very true of the EU Referendum in 2017. Many people are not interested in politics, our politicians have deliberately obfuscated and confused the subject as per the huge in-tray voters have to contend with from Brexit for Beginners.


In chess the win/loss conditions are "Check-Mate" or "Resignation by toppling the King" ; the assumption is that Leave vs Remain win condition is a >=51% result to either side in the Referendum. But actually there's another game of political chess being played here: Democracy as well as EU Membership. The Referendum is a chance for people/the pawns to win the game where for >40yrs they've been deprived a say and over x7 major treaties as well as removing such a large source of enervating political energy that itself is costly. In Chess there's a special rule for pawns called "Promotion":-

"Promotion is a chess rule that a pawn that reaches its eighth rank is immediately changed into the player's choice of a queen, knight, rook, or bishop of the same color. The new piece replaces the pawn on the same square, as part of the same move. The choice of new piece is not limited to pieces that have already been captured; it is legal for promotion to result in a player controlling, for example, two Queens of the same color despite starting the game with one. Promotion is immediate and mandatory for any pawn that reaches its eighth rank, and the pawn may not remain a pawn. Pawn promotion, or the threat of it, often decides the result of a chess endgame."

To use one more final analogy: The most important game for people/pawns is not the EU Membership status, but the status of our politics of governance: Our democracy and how that is represented in a global world vs an EU construct. 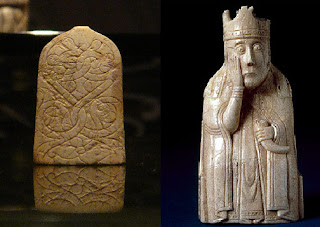 Promotion: From Pawn to Queen

Pete North makes this clear in a this recent blog: Brexit: a time to step up to the plate :-


This year I've gone big on the global regulatory agencies. Not just because I'm an epic nerd but also because knowledge is power and in this game, and it can be a most potent weapon. It's as exciting as it is interesting.
Because regulation is all about making things work better, faster, safer, and cleaner and working in harmony with other systems it means it is at the cutting edge of technology. [...]

While this process isn't inherently corrupt, it can at times be murky and half the reason for that is that virtually nobody is watching this process and it is accountable to no-one. If ever there was something considerately in need of democratisation it is the global regulatory process. Our media tends to focus on the daily biff-bam politics of Westminster which is so far down the chain as to be completely uninteresting to anyone following the real business of government.

Watching MP's debating whether schools should be teaching first aid is like watching my local parish council deciding if Filton roundabout should have new street-lamps. It's actually embarrassing to watch the mother of all parliaments reduced to this. What's depressing is that MPs can't begin to comprehend just how debased and usurped that institution is.

And again from LeaveHQ: Land of the dinosaurs 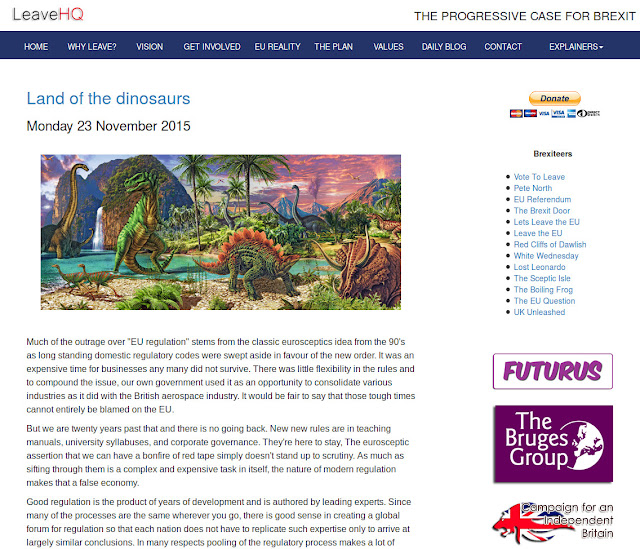 "That is why LeaveHQ takes a different pitch to the old guard. We have talked at length about the way in which regulations are now going global and that the EU is not the top table and is just as much a recipient of law as we are. Examining the consultation process shows that the EU routinely usurps our own influence in initiating reforms and often adopts law we would otherwise veto.

We are no longer a heavy industry economy, we rely on intellectual innovations as our exports and thus industries can spring up out of nowhere. If we want to create the best trading environment for them then we need to be looking out for their interests at the global level and not waiting on the packed time table of the EU's diplomatic service. Our current relationship is a hindrance to our global agility and it is our view that all of Europe suffers for the lack of competitiveness.

In order to get the best for ourselves and Europe, Britain needs to be at the top tables looking after its own interests. What's good for London and our tech industry is good for all of Europe - and it is myopic of the EU not to recognise this."

EU Referendum: the role of prestige 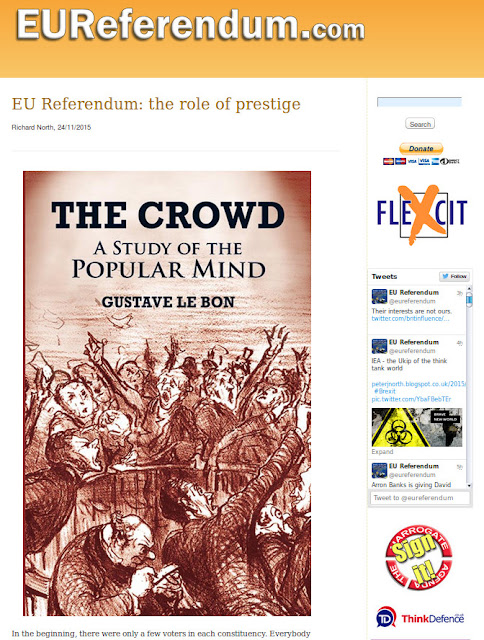 Perhaps the "win condition" for the upcoming EU Referendum in 2017 is not what people think it is defined as, perhaps the real win condition will be the success rate of the conversion or to use our analogy Promotion of people from "political pawns" into "political actors" with real knowledge and hence real political power? 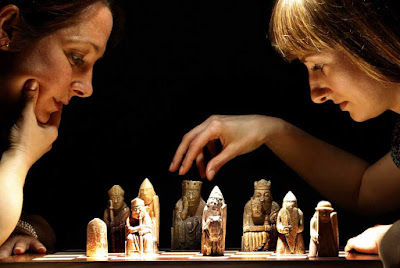