Both the BBC news reporters, Matthew Elliott and George Osbourne are all viewed through the mirror of Monty Python's Wicker Island. Meanwhile John Longworth like some sort of religious prophet talks about uncertainty that has been talked about since the early 1960's on our EU Membership!


"The period of uncertainty could be very damaging... get the referendum out of the way as quickly as possible and then move on! 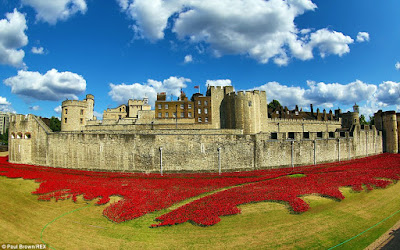 Listening to the many opinions of people on whether or not the Ceramic Poppy "installation" should end or continue, at The Tower of London in November 2014, for a few more weeks was very illustrative of the diversity and strength of feeling people have over any given subject, given enough respondents.

Of course these were real people and they expressed themselves with great emotion, with respectable point of view and curiously all had a valid contribution. In effect there was no such thing as "The Answer"; any decision would prove both popular and unpopular; a point which was made at LeaveHQ in The Problem With Politics. What however was refreshing about this was that everyone provided well reasoned answers however and managed to communicate themselves and their point of view with sincerity but also it seemed to me with self-confidence and appreciation that many other opinions existed yet they believed in their own contribution equally. 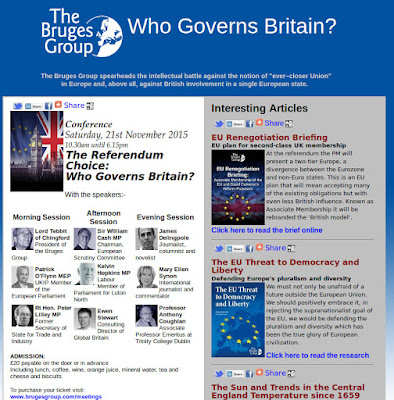 Above The Bruges Group is putting on another meeting and the title quesion is very good to see. I was tempted to go along to this, yet I decided that despite some of the eminent speakers and the opportunity to talk to people attending this event, there was a more constructive and much much larger audience I would prefer to "talk to" and also to attempt to understand their understanding as being the focus of that title question: "Who Governs Britain?" You do or should.

Previously, When to Attend/Hold Meetings, it was noted the function of a meeting is directly related to it's group size. At significantly large group sizes you get singing/chanting/music group cohesion signals and bonding and identification with colours and banners; and very little "content" for members understanding, which is assumed, for example:-

"Our objective is to recover power. Our focus is on the acquisition of power. And once we ourselves, the people, hold the power, we can then attend to the many problems and injustices that plague modern society. But without power, there is only protest – and we achieve nothing of any lasting value."

The above from the title page of The Harrogate Agenda, perhaps is the best place to start when considering what "The Many/We The People" generally behave like, understand and coordinate like. It has to be recognized that as group animals we naturally tend to form groups and create a lot of action and noise and move around a lot as our initial approach to solve political problems: Observations invariably confirm this is the first reaction and pattern of behaviour adopted by people. Perhaps we all see ourselves as Potential Lions if only we're given a fair political platform to stand on; aided by our fellows? 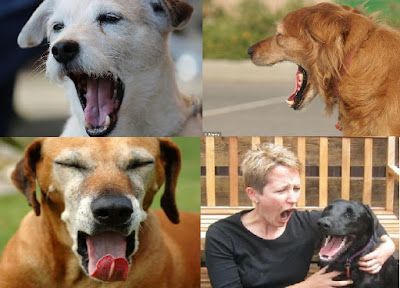 Do you feel an urge to join in?!

It can safely be said that this is the unacknowledged working assumption of all the Referendum Campaign Groups, particularly UKIP and Leave.EU: It shapes their output as per many summaries from Pete North:
The other campaign group Vote Leave employ a different political strategy as per Pete North again The Leave campaign race to the bottom. They're effectively attempting to ensure that the campaign is framed by the preferences of The Establishment, and ensure the argument is complex and contradictory and hence fertile ground for the politicians to deceive and fuge as per Using A Macroscope on Cameron's Reform. Vote Leave Campaign appear to be an example of The politician's Top-Down Referendum as per How About A Nice Game Of Chess?


This may seem bizarre to us now, but it is the case that anyone who wanted to know in 1975 could easily have deduced that he negotiations were a fraud. All they had to do was read Kellner's piece on the front page of the Sunday Times.

But there was something more to it – a lot more. What we were also seeing were the effects of "prestige".

When we look into the mirror we individually we see a Lion, but when Politicians look at us through the mirror of Polls this is what they see:- 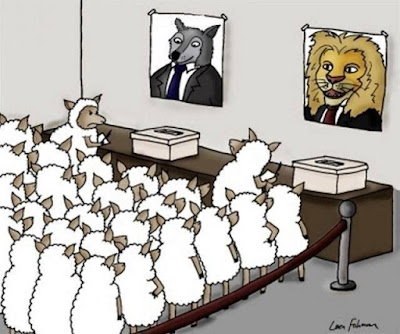 The Few vs The Many: General Elections are a Catch-22

And Polling is in general becoming the type of mirror they see us through, even less as sheep and more and more as mere random numbers as per Politics And The New Machine:-


I asked Doug Rivers what role the measurement of public opinion plays in a democracy. He said, “The cynical answer is ‘Once the rockets are up, who cares where they come down.’ ”

This said, there is some use in knowing roughly what other people think, if they are broad sentiments and as reported by Dr. RAE North EU politics: we're on our own (almost) 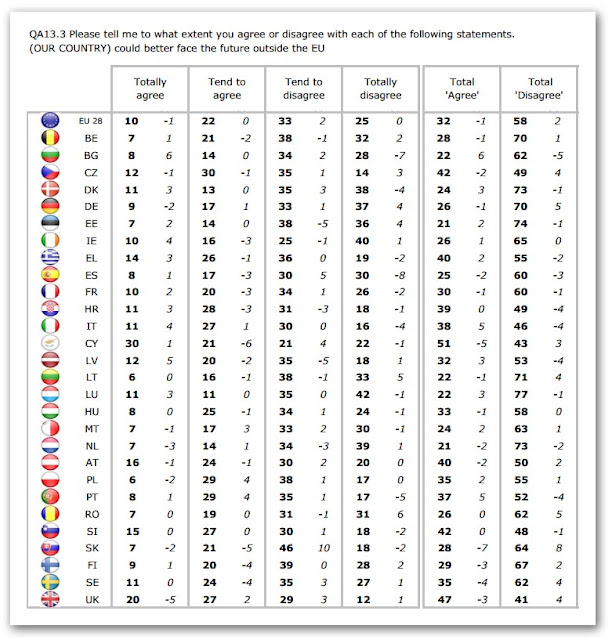 "Picking up on the Eurobarometer poll again, it is interesting to see the EU-wide question being asked on whether individual countries "could better face the future outside the EU" see chart above - click to enlarge).

But what is fascinating here is that, apart from Cyprus, we are on our own. With Cyprus, which has 51 percent preferring out, to 43 in, we comprise just two of the 28 EU member states who can turn in a majority against the EU."

There's an interesting contemporary interview of the public in London by aljazeera: 'Brexit': Should the UK leave the EU or not? and to summarize:- 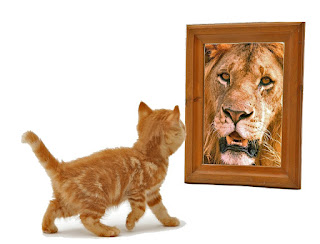 How we like to think of ourselves when we give our political opinions...

In actual fact, the above summary of word/spoken/linguistic form of opinions are no different from the above footage of mass gathering: The instinctive reaction to huddle together as a group to solve political (group) problems/pressures/threats. This probably explains the emphasis on polling data: The whole, the behaviour of groups as a whole: Their random opinions merging into a group "feeling".

It's much easier to observe this via live footage:-

I think there is a connection between all these clips, and in fact many other clips that could have been presented or perhaps have been aired at one time or another that most people will have watched and listened to other members of the publics' opinions... Invariably when the public are interviewed on any sort of political subject, invariably they respond in a juxtaposition between providing an answer full of conviction at the same as providing an answer that makes them look as they would like to appear or not wish to appear. Usually this leads to a sort of "bashful confidence" which is peculiarly contradictory in such combination! 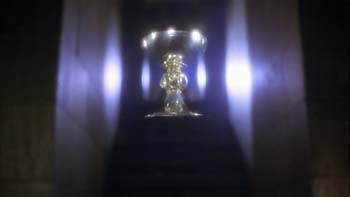 We've looked at News Presenters and increasingly so our leading politicians. Most people know how the rest of the politicians behave. But less well appreciated is how the most important group, the people tend to speak and behave when we talk about politics. There's enormous industry and expenditure on the data science and analytics of polling data; because understanding how people behave and think about politics is a kind of "Holy Grail" of politics.

And here's the "the greatest trick the politicians ever pulled on the people in referendums":- 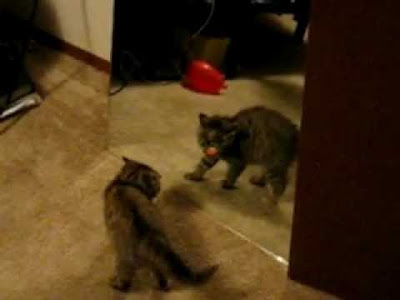 And how we really behave when we give our political opinions...

Many people will not know the details of the politics, it will be an unknown and this unknown leads to the natural reaction of caution and even as per the inexperienced kitten above "fear" as we've come across so many times before FUD (Fear, Uncertainty and Doubt). But because we don't understand something does not mean we have to be fearful of it.

As per Dr. Simon Usherwood, University of Surrey:-


My own view would be that the UK has suffered for a long time from a lack of deep public debate about European integration, just as it has from a lack of debate about the country’s wider position in the world, from which the European question cannot be disentangled. The referendum is probably the best opportunity there will be for a generation to get people interested and engaged enough to talk about, so we should make the most of it.
That debate doesn’t need to be brought to life by politicians or the media, because we enjoy a public space that is more open and accommodating of different voices than ever before. If those people who do care about having the debate can start to build it, then there is an opportunity to create something that is organic, considered and useful, however the referendum turns out. That opportunity is in our hands, not anyone else’s.

What is people's power? In General Elections, there is none. It's a Catch-22 system. But when it comes to a Popular Referendum, there's a reason the Politicians have not given the people a referendum (EEC,EC,EU,EZ...) in >40 years and the first and only in 1975: 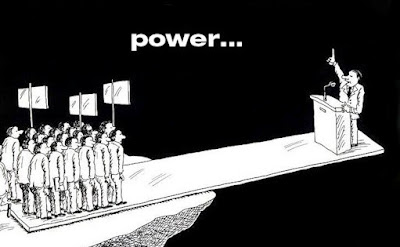 In Referendums, peoples' opinions are the real power and the politicians know this.


If everyone acts fearful we get the results we DO KNOW (as per The Knight 'N Knave method) so well: General Election results of musical chairs where no-one's vote amounts to anything of value! If we drop our fear, then I think we will get something of value from our vote: Making the politicians do what we want them to do for us - for once.
Posted by Red Cliffs Of Dawlish at 11:04