Power To The People 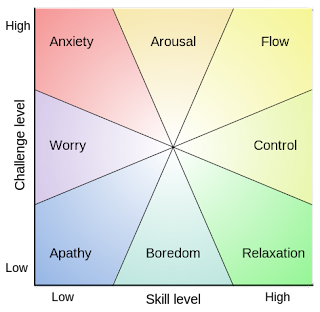 FLOW: "The psychology of optimal experience"

One of the best books I've ever come across and gladly though carefully share, here, is Mihaly Csikszentmihalyi 's "Flow: The psychology of optimal experience". Effectively or colloquially, the graph above represents the balance between a person's skill at an activity or task and the challenge level of applied  skill to this task. Invariably the conditions for "being in the zone" or as per sport "on fire" or "in a hot streak" etc etc require conditions such as clear problem and goal definitions and balance between the two variables. The conditions to reach FLOW itself are a balance between the two where: Challenge = Skill, but tend to emerge where skill is higher and challenge is higher to match that skill. Variations around this eg Skill >> Challange and you have Relaxation, where Challenge >> Skill you have Anxiety and where both are very low you have Apathy. We've already discussed how negative and deleterious too much Anxiety is to experience and how it reduces our decision-making capacity as per Our Government: "Ifs, Buts, Maybes" and again in Argumentum Ad Infinitum and hence perpetuated on a national scale in the Legacy News-Media in Understanding The Mountains of Madness. 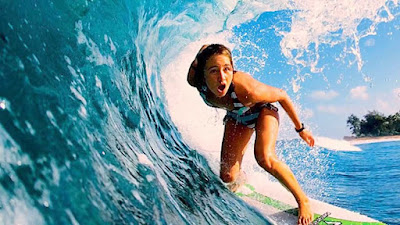 This is all incredibly destructive behaviour to peoples' experience of politics: It accounts in my opinion for the "Apathy", "Boredom" and on ocassion the over-dose by design or ineptness of "Anxiety" the politicians inject into the national discourse in order that they may be on hand to relieve the pain later; having prolonged it, in the first place. These destroy our positive feedback-loops as per Pattern Recognition which is depend on Memory input as compared in Eurosceptic "Amnesia" vs Brexiteer "Total Memory Recall" .

What has to be done is to come back to the behaviour of our politicians, the ones who are supposed to represent the people, the "professionals"; the 650 MP's in our Houses of Parliament at Westminster and our 73 MEP's in the European Parliament in Brussels and Strasbourg. Quoting Mihaly Csikszentmihalyi  in FLOW, p.190-191:

"A person is part of a family or a friendship to the extent he invests psychic energy in goals shared with other people. In the same way, one can belong to larger interpersonal systems by subscribing to the aspirations of a community, an ethnic group, a political party, or a nation.

In ancient Greek usage, "politics" referred to whatever involved people in affairs that went beyond personal and family welfare. In this broad sense, politics can be one of the most enjoyable and most complex activities available to the individual, for the larger the social arena one moves in, the greater the challenge it presents. A person can deal with very intricate problems in solitude, and family and friends can take up a lot of attention. But trying to optimize the goals of unrelated individuals involves a lot of complexities an order of magnitude higher.

If we consider only material consequences, we might regard selfish politicians as canny because they try to achieve wealth and power for themselves. But if we accept the fact that optimal experience is what gives real value to life, then we must conclude that politicians who strive to realize the common good are actually smarter, because they are taking on the higher challenges, and thus have a better chance to experience real enjoyment.

The concept of flow is useful not only in helping individuals improve the quality of their lives, but also in pointing out how public action should be directed. Perhaps the most powerful effect flow theory could ahve in the public sector is in providing a blueprint for how institutions may be reformed so as to make them more conducive to optimal experience.

A community should be judged good not because it is technologically advanced, or swimming in material riches; it is good if it offers people a chance to enjoy as many aspects of their lives as possible, while allowing them to develop their potential in the pursuit of ever greater challenges.

But no social change can come about until the consciousness of individuals is changed first... those who try to make life better for for everyone without having learned to control their own lives first usually end up making things worse all around." 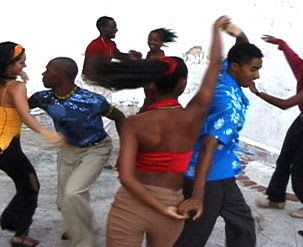 In Of Democracy and Time Dilation the "measurement" of time on the quality of our politics and hence our decision-making was considered and very briefly described or "looked at". The ratio of years of participation, the increase in population from about 32 million to 65 million from around 1901-2015 and hence the dilution of representation, along with the representation of more of our powers in the EU Parliament and even lower representation (both turn-out and ratio) eg 1:1 million constituents more or less and the general decline in voter engagement ie General Elections turn-out. We also looked at some of the arithmetic of the Referendum itself in via The Boiling Frog: Frog Fractions: EU Referendum: 51% and further in Understanding The Mountains of Madness that describes the adoption of the politicians' approach to "guiding the public" towards the middle Green colour in the spectrum via the Legacy News-Media blanket coverage: Based on the above Apathy-Worry-Anxiety dynamic above.

What we can learn from the Flow Theory is that Time, Definition of Challenge, Skill, Internal Motivation are all conducive to improving the quality of experience; and when applied to our politics this is very much what is required via a change to encourage these parameters, for example via greater Real Democracy with increased connections to representation such as The Harrogate Agenda provides the conditions for:- 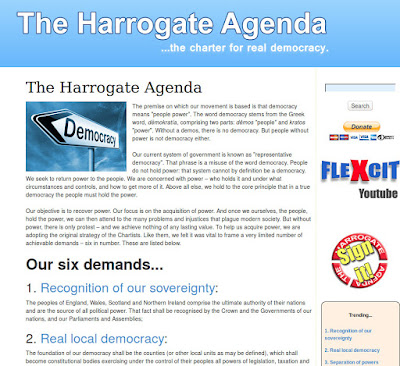 Reducing the layers of abstraction in our politics and reconnecting people

Before I became personally involved and interested in politics, I remember one great holiday I spent with my brother who was living in France. We were in the French South Western region of the Pays Basque in the town of Biarritz (excellent waves) and decided to cycle across the border into Spain, The Basque Country (Euskadi). It was an amazing sense of freedom cycling across the border into a new foreign land (where suddenly my brother's decent-enough French was no-longer understood and I could leap "into my own element" and use my "very-beginner's Spanish" (just!)). On our way towards San Sebastián we decided to veer off course and take some refreshments in a small town and stumbled upon a scene such as (although smaller) this:- 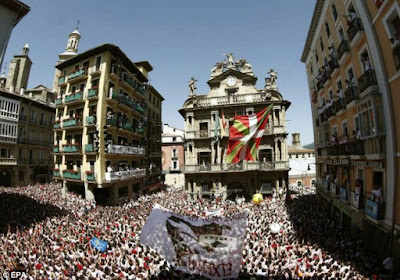 Anyway, it was a lot smaller than the above, but there were speeches, brass bands and plenty of people congregated and there was "controlled energy". We had a fine tapas for our "pit-stop" but the impression of that small town square meeting for the Basque "independence and autonomy" always stayed with me, seeing with my own eyes an example of "active real democracy". And I still admire that commitment, particularly when it reminded me of a geography documentary I saw a long time ago:-

An experiment in "Worker participation" in Mondragon, a small-town in North-East Spain in The Basque Country. One of the things this idea of attempting to "re-engage people with meaningful work" reminds of:-


"Lack of experience diminishes our power of taking a comprehensive view of the admitted facts. Hence those who dwell in intimate association with nature and its phenomena are more able to lay down principles such as to admit of a wide and coherent development; while those whom devotion to abstract discussions has rendered unobservant of facts are too ready to dogmatize on the basis of a few observations" ~ Aristotle

Recently the EU Referendum has been looked at and the communication has been simplified at the same time as referencing the source material FLEXCIT, The Great Deception and a myriad of other sources of information. We can think of the EU Referendum as a useful and popular exercise in The Life Changing Magic of Tidying Up and in Strange Trails we looked at the sadness and sorrow of people who expend their valuable "psychic energy" (catch-all) only to be let down by the politicians on both sides of the Referendum Question; because the intellectual foundations were not soundly laid as they should have been by our wretched politicians (The knight 'N Knave) (as per Dr. RAE North) were not laid (ie educating and "skilling-up" the people in understanding the politics):- 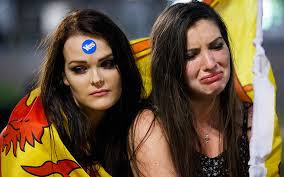 The product of the politicians neglect of educating people: Anxiety + Apathy => Sadness from a lack of understanding the challenge.

In Pub Signs the attempt was made to provide a visual indication of communication of the Central Point Argument of the EU Referendum as explained in Argument Abstraction. 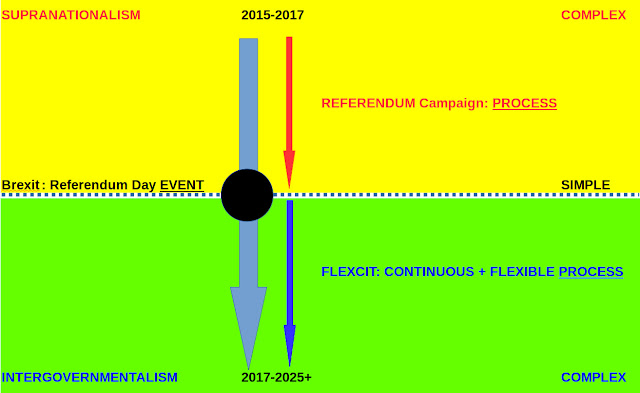 We'll be offered rich pickings of "Turkish Delight! Turkish Delight!" but it is a promise of false riches based off the above dynamic without resolving this intrinsic self-made political malaise which are politicians are not in the business of reforming the public anxiety-apathy and nor is the legacy media with their worry default of "Bad News". It ties into given the EU Referendum is the first popular referendum in >40 years: The Harrogate Agenda:-


The premise on which our movement is based is that democracy means "people power". The word democracy stems from the Greek word, dēmokratía, comprising two parts: dêmos "people" and kratos "power". Without a demos, there is no democracy. But people without power is not democracy either.

Our current system of government is known as "representative democracy". That phrase is a misuse of the word democracy. People do not hold power: that system cannot by definition be a democracy. We seek to return power to the people. We are concerned with power – who holds it and under what circumstances and controls, and how to get more of it. Above all else, we hold to the core principle that in a true democracy the people must hold the power.

Our objective is to recover power. Our focus is on the acquisition of power. And once we ourselves, the people, hold the power, we can then attend to the many problems and injustices that plague modern society. But without power, there is only protest – and we achieve nothing of any lasting value. 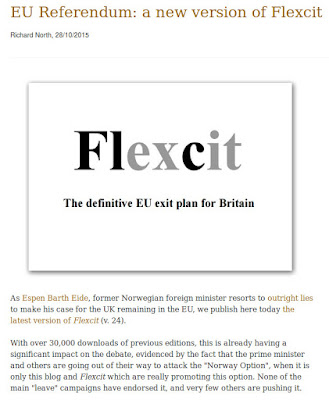 FLEXCIT, the latest version is available from EUReferendum.com. The challenge is high, but if you choose to download it and increase "your skill and understanding" you might find politics is a much more rewarding use of your time and energy... and... as importantly... of your friends and family's too.

I'm off to finally get a printed version from the local print shop and hope to show plenty of people this great work for the people.

Posted by Red Cliffs Of Dawlish at 06:16