Battle In Heaven: The Trouble With Politicians 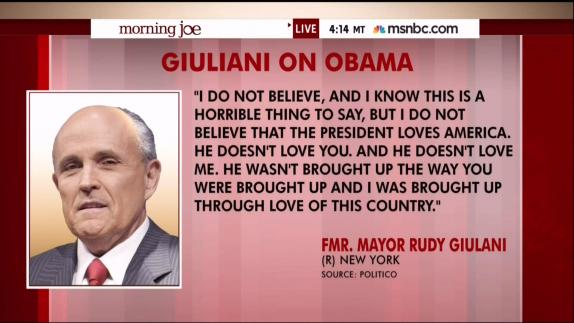 The above statement by Rudy Giuliani, former Mayor of New York, is an example par excellence, an exemplar of "the trouble with politicians". Have a read, this American polician's words makes the British equivalents look like pixies of politics by comparison! If I remember a quote from the great story-teller J.R.R Tolkien, correctly to paraphrase:-


"I see no Saurons, today, but the descendants of Saruman the silver-tongued are everywhere."

Well, there may well be a Sauron or two in Middle East, presently, but in British politics it's "these descendants" that are flourishing and thriving. And to use the above as the prime example:-
I'm not here to comment on the veracity of the situation in the USA's politics; don't have a clue about it. But the method of rhetoric is incredibly tight above and skillful, I think. The silver-tongued words shine and gleam with potency, it even makes me worried that President Obama could be a great big uncaring fraud, and that if only we had a Big Sister or Brother (or Father...) to look after us and love us, truly as our own family. Something like that - Yeesh!

British politics is no different if you are raising your eyebrows here, sceptically: Look at Nicola Sturgeon who acts in this bullying and commandeering way for the Scottish people. Look at the outpourings of Nigel Farage (Immigrants on trains speaking funny makes me uncomfortable) or recently Nick - fucking - Clegg:- 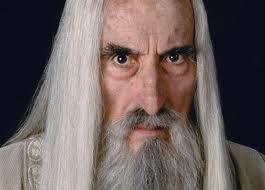 Helpful Tip when dealing with modern-day Sarumans: Don't listen or allow their voices through your ears (block your ears even!), before, first looking very closely at what their eyes are doing for a moment of time. As masterfully characterized by the wonderful actor Christopher Lee, above, playing the role for the Hollywood movie adaptation (unfortunatley like modern movies like modern politicians, a vision eviscerated from it's senses)!

Of all the Saruman's of today, I really least like the ones that work hardest on being liked! The Tony Blairs, Nick Cleggs and of course the further grubby descent of politics by charlatans with even more silvery tongues such as Boris Johnson (part-time comedian) or that comedian/celebrity with long hair and designer goatee who supported Labour and I've completely forgotten his name; the strutting and preening peacock; or possibly Owen Jones, such a nice and so good; what a darling child: That makes me very suspicious... . It's also little wonder our Prime Ministers must spend so much on their clothes and haircuts (Monsieur Hollande's barber?) and acting classes and PR agencies/spin doctors and more and more appear to be selected on the basis of their young and fair of face looks (Blair, Cameron).

It's tempting to look at the opposite proposition *wink*.

In part what has this strand of thought is a New Statesman article: "Nick Clegg: Brexit is too much for the Tory brain". You can google it, I'm not linking such filth, but if you read the above with the above dissection and then you also do the same to Clegg's piece above (just read that title!) then I hope I've exposed "The Trouble With Politicians" a little bit? The New Statesman has the gall to push a pop-up about "quality journalism costs money" too. They're mouth-piece organs to what in Tolkien's book was the title of chapter 10: "The Voice of Saruman":-


"[His voice was] low and melodious, its very sound an enchantment [...] it was a delight to hear the voice speaking, all that it said seemed wise and reasonable, and desire woke in them by swift agreement to seem wise themselves ... for those whom it conquered the spell endured while they were far away and ever they heard that soft voice whispering and urging them."

The bit in that chapter that especially resonates with me, is the invocation of wiser leaders requiring to discuss great and important matters behind closed doors while the small and insignificant little people tremble with trepidation and hope that these great persons might deliver them from their troubles... or something like that. So true: All the stage management of politics today, captured in that little passage. 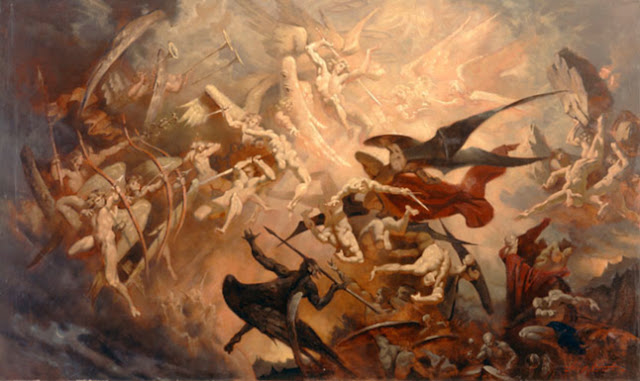 Battle In Heaven: A recurring theme, always above us.

The above picture seems to resonate for some reason... the distant and rarefied visualization of "higher unseen powers" at work or battle. With respect to politics it does seem to be something like this in my own personal experience; so I may better understand these terrible and dread clash of the gods)?:-
The trouble with politicians it seems to me is that people become bound to the idea that they learn and follow from such people and all will be wise and great as it were but remain stuck on one of the lower levels, always looking upwards at the great battle in heaven by these silver-tongued descendants.

Pete North recently blogged in my opinion the definitive verdict on the subsequent and forthcoming consequences of the EU Referendum and how it will shape and guide the formation of Brexit:


Brexit: the revolution that never was 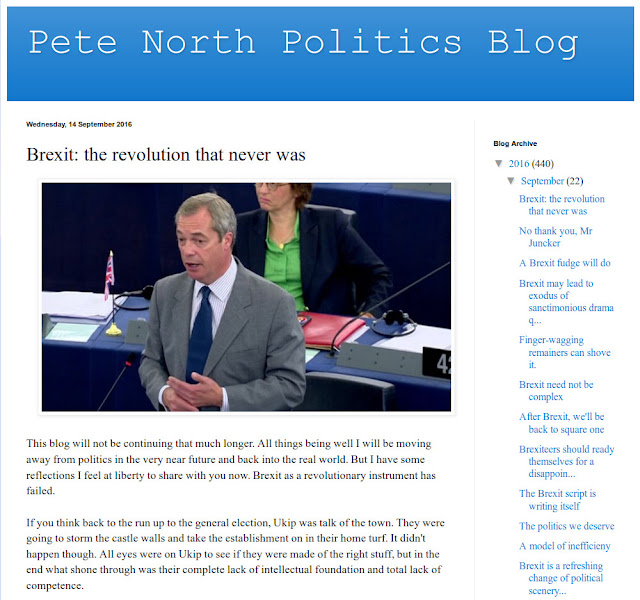 The consequences of The Silver Tongue

It's worth reading all of Pete's blog on this subject, but to select a few particular areas:-


"If you think back to the run up to the general election, Ukip was talk of the town. They were going to storm the castle walls and take the establishment on in their home turf. It didn't happen though. All eyes were on Ukip to see if they were made of the right stuff, but in the end what shone through was their complete lack of intellectual foundation and total lack of competence.

The original intent was that The Leave Alliance was going to put in a bid but we were caught off guard and never had the resources to mount a credible challenge. We did however have one thing the other contenders did not. A plan. Through Twitter we eventually got the attention of Arron Banks and there were a number of talks with regard to the adoption of Flexcit - a plan that would take us beyond Brexit. To cut a long story short, that same contingent of malevolent Ukippers rapidly bullied Banks into a u-turn. Banks was a coward.

And now what have we? A very problematic win. In most respects Vote Leave failed to register at all with the media unless it was being especially obnoxious. It certainly didn't win any new friends.

It seems to me that the EU was an abstract element in the whole campaign and nobody even attempted to sell the broader ideals of the EU to the public.

So what we have is a corporate shell of a campaign, with no movement behind it, no real traction among its backers and a handful of empty marketing slogans which are politically unrealisable.

There is now a shadow organisation in the image of Vote Leave but it is not a genuine grass roots organisation. It is one of Matthew Elliott's sock puppets.

Brexit is only half a job and if the mission was to return the power to the people then the Brexit we get doesn't even scratch the surface. We're back at square one - back where we were when I was a kid attending meetings with Farage and Sked speaking to audiences of three in Lancashire church halls.

If Brexit were to have any revolutionary potential it needed skilful, knowledgeable leavers at the forefront working to a plan with a movement behind it. And that needed to be in place years before now. Vote Leave should never have even had a look in. The lead campaign should have been territory owned by Ukip."

One of the excellent bloggers during the Referendum and before Paul Reynolds made this post: The Last Straw concerning the disintegration of The Blogger's Army as the new opportunities and consolidation of progress was attempted by various members to assert FLEXCIT into influential areas of Westminster and thereby achieve lasting success (just read Pete's account above for that type of success...). It's a little sad this happened, I think personally. However,  the silver-lining of failing to counter-act the Silver-Tongued:-

"I do not enlighten those who are not eager to learn,
"nor arouse those who are not anxious"
"to give an explanation themselves."
"If I have presented one corner of the square"
"and they cannot come back to me with the other three,"
"I should not go over the points again."


Usefully the above is now very visibly established: An experiment has been successfully completed. ~ Confucius Analects: 7:8 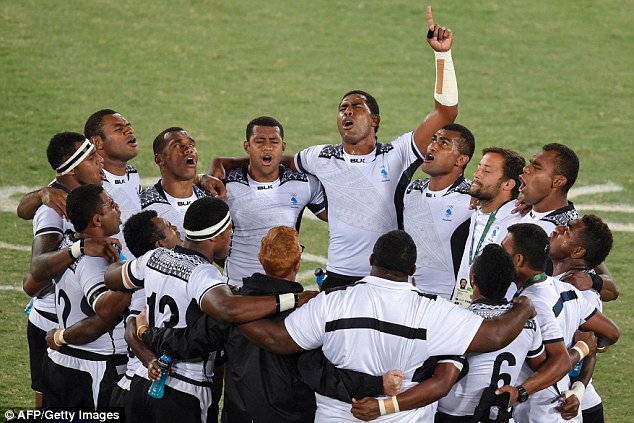 The Fijian's above; which was easily my favourite result from the Summer Olympics, having followed Sevens for a long time and the above achievement was the result of a lot of hardwork and preparation and execution in addition to the team unity expressed above - I think like most teams, the hardwork and preparation is the basis for the team unity that follows. A similar implicit trust or bond emerges in similar-sized squads in the armed forces.

From my perspective, it's a shame The Blogger's Army could not have held it's shape and been more of an example of what people could achieve through hardwork and preparation instead of what effectively was decided: To give into the silver-tongued politicians and offer the EEA scraps as prizes in the aftermath of this big experiment: Just watch as they all seek to exploit "something" from the scraps that will be on offer, from Nick Clegg or Nigel Farage to Matthew Elliott and others: . I personally support Dr. RAE North's stance here, to defend what one has actually done over what others are only willing to say they will do or have done:- 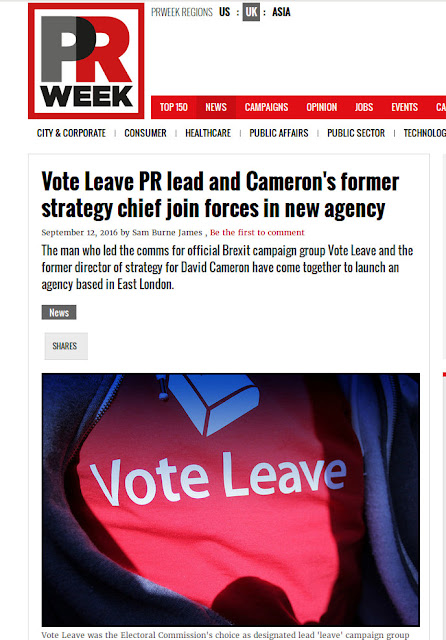 Honing more "Silvery Words" to come in the future from the data-mining of the Referendum voters database.


"Gill, who worked with Cameron for 10 years , said the pair provided "a unique perspective on Brexit".

"We’ll be doing quite a lot of Brexit intelligence and Brexit insight, a lot of companies are now thinking about developing campaigns in the wake of the referendum result," added Stephenson

Stephenson also said that their experience on both sides of the referendum gave the new agency a "competitive advantage", and that while both had spoken with several established PR agencies since leaving their last roles, that he was more driven by a desire to run his own business.

Asked by PRWeek for the main lesson both had learned in the referendum, Gill said it was "that the age of political theories and hunches are over - you’ve got to base your strategy on the data".
Stephenson said: "Keep it simple - I think by the end of the referendum people were talking about our simple messages like the £350m a week figure and Turkey joining the EU; we used language people could use in the street or in the pub."