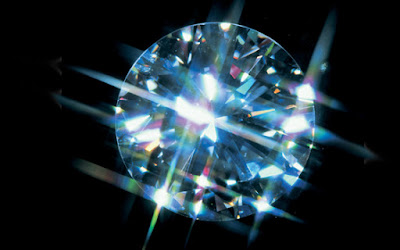 What is the value in Brexit?

There is one silver-lining from having to endure the nonsense rhetoric or what is given the (overly-) serious political description of "phony war", and that's that rhetoric can be made to work BOTH ways.

In one previous blog, the obervation was made that the common wisdom is that "no-body knows" if Brexit is good or if Remain is good or better or worse. Namely confusion and complexity at work before communication is able to even parse anything worth saying. This is one reason I find it particularly difficult these days to comment over at EUReferendum.com. I know in most cases I've not done the requisite work, research and preparation to master the details to be able to simplify enough to ask useful questions and hence develop/advance the discussion presented there.

I've seen a number of times group meetings where people have come out with the usual mantras irrespective that being present at these meetings they should, as preliminary, be familiar with the overall conceptual picture... and predictably you see a "flash of lightning" darken Dr. North's response the speed of which is probably proportional to the number of "man-hours" invested in these materials so that people might actually have the basics of communication wrapped up first before attempting to argue the details and logic in seriousness using this common platform.

For this reason I've chosen to attempt to limit the scope of this blog to policy areas: Environment, Fisheries and Farming, in future, at least that may aid in attempting to master the details as much as I am capable as a non-expert. As well as this, some of the thinking that goes around the subject of Brexit such as this blog: Namely connecting the principles to the details at different ends: Working on the problem from both ends. 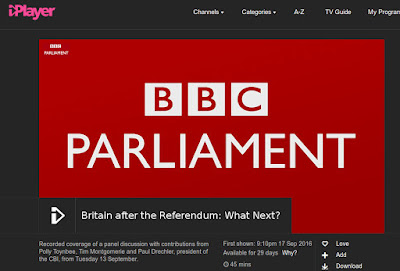 I watched yet another BBC political production: Britain After The Referendum: What Next? which, did not answer the question: "What Next?" but did as with Question Time provide a pedestal for various talking heads to spout their rhetoric from.

The central question which keeps failing to be acknowledged, that from The Great Deception: "What is the EU for anyway?" then from that "Is it worth it?" is derivative. Instead we have from the speakers:-
All the speakers are very studied in the effect of their words, but none bothered to establish before "What Next?" first: "Where Right Now!"

So, looking for a countervail of rhetoric: Where words rely less on substance and more on style to shift attitude as opposed to carefully argue reason for reason, the "management style stirring speech" is a possible approach; one that has some merit and points out to people: That work, preparation and research are all prerequisites:-

These sorts of motivation or management style talks necessarily contain an amount of cliché to them, but that does not detract from the likely reason for this: How many people, have heard such "advice" a number of times  in a number of different ways? Or perhaps so many times that, and end up only feeling good about such speeches and the positive prospects mentioned, and then "What Next?" Do absolutely nothing about applying them or testing them to see if they actually work?

You have to laugh, not at some of the now quaint aspects in the above, which have aged, inevitably, but at the difference between the contents of this speech and the contents of our modern politicians' speeches but as important if not more so: The intent behind the messages proposed in both cases. Let's explore this concerning how it affects talking about Brexit:- 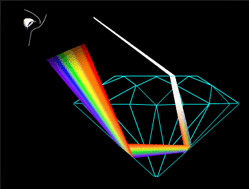 Normally in science, light (white) travels through the prism then separates out into the various different colours which we take delight in when it reaches our eye (sparkle in the diamond's multi-faceted case). However, in politics, this is often what happens in a lot of communication between the questioner (sending out the "light"), the process of communication inbetween and the answer from who ever is on the other end, now scale this up to the institutional processes of politics but in the same Q&A form of person to person (as we always see on our tv screens eg):-

In the above, using Dr. North's points about Brexit being a complete thing or using the quote again "Swallow it Whole", the diamond being the different angles of questions asked of the (sub-) components of this complete structure:-

Much like the motivation speech above, it may be that people can listen and read or look at such considerations and yet ultimately not pay any heed to them, because without learning the very many and sometimes boring and seemingly infinitely endless details upon details (ie hard work here and now); people decide they'd prefer to feel good and be comforted in hearing of stories of others who've "miraculously" found Acres Of Diamonds across the other side of the world. This seems to be the politicians' bread and butter basis of rhetoric?

The value in Brexit is much more inherent than is imagined, is probably the best conclusion to use. But the cost is equally inherent and I think more easy to come to terms with right now: A failure of investment of people in this politics, is as per the speech above, "going backwards" and the results may then be considered to be understandable in terms of their "perversity" of outcomes; if check-box listing these the list would be long, of notorious note to summarize however:-
In the next blog I will cover the Environment subject as applied to Brexit, as I've attempted already with Fisheries. However, from the ideas "talked about here", I hope to apply them to examples within that policy's context and thus better explain them as "examples in action" and observable.

If there's one thing Brexit has exposed, it's how perverse politics can become and how the inherent message within the modern political rhetoric is a message of "powerlessness of people to the political systems".
Posted by Red Cliffs Of Dawlish at 06:58