Voters, Voting Systems, The Vote: A Councel Of Perfection 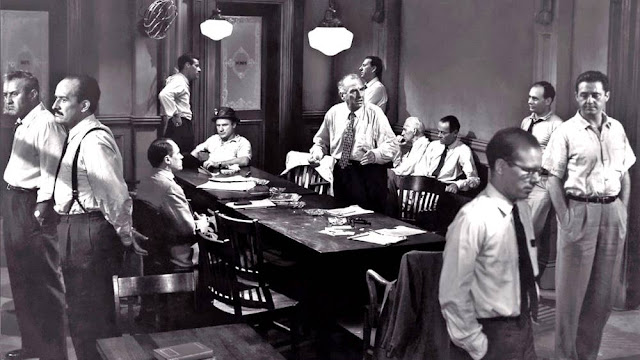 Which Problem? The Vote {The Subject}, The Voting System {A Result or "verdict"}, The Voters {Behaviour}.


A Councel Of Perfection :

"Instructions or advice given for one to attain an ideal but unfeasible or unrealizable standard / advice that is ideal but not feasible."

One of the recurring arguments against the EU is, in so many words, is that it "fails us" because as a state of political relationship it is "less democratic" either than we ought to be experiencing or than what we originally used to experience and both of these at the same time. Finally the 3rd strand; the idea that the UK could become more democratic than either past state or present state without the EU and secondly with a reform of the UK itself.

What about the arguments supporting the EU? That the UK may exert more influence, that the UK economy is dependent on the EU that it would not function as successfully without EU membership?

On both sides of the argument, the problem is this:

In the film, "12 Angry Men", this process of unveiling what exactly is going on, takes place. First the subject (the details of the crime as reported) is communicated. It leads to decisions based upon this information by the voters or jury which then leads to an early potential verdict, accordingly. Subsequently however 1 of the voters wishes to question a component of detail and the accuracy of this in the picture of what happened and thus re-examine the subject's accuracy: If the suspect is guilty or innocent and does the verdict sufficiently report on that - specifically as opposed to merely return a set of numbers cast by 12 men. Subsequently yet again, the behaviour of one of the voters is revealed to be a source of occlusion to certainty and accuracy and thus a verdict according to the system of voting is thrown wide open.

In effect what is revealed is that after a number of processes (or indeed dramatic developments) different components of the council of men in the court house and in the room of deliberation and amongst themselves, exert different strengths of contribution. In this case 'what is going on' is seen to actually transform several times via these different strengths of contribution from the 3 main categories. Thus the question of "what not"? is significantly pertinent.

If the categories warp the question in the minds of the voters, how can a successful decision be made via democratic means across millions of voters?

Traditionally politics seems to have produced a situation where larger parties promote more and bigger policies and thus gain more votes due to both coverage and monopoly and on policy to which large groups of people are all beholden on for example, education, hospitals and of course taxes etc.

Thus in this situation the actual voting system itself shapes the impression given. This may be necessary in some ways: Overall things continue as usual. But it may not be sufficient for the future of politics...

What is interesting about Brexit/EU Referendum is that this was more skewed towards the subject forming the impression given. Irrespective of the debate over what was promised, the actual voting system of Leave or Remain Membership of the EU was clear and of less confounding influence. Thus the last category constituted the biggest challenge: The UK Voters.

A shift might happen in the future for politics: Instead of large multi-issue parties dominating, there may be smaller single issue specific issue parties. Where there are policies that span across people then the solution is for Local Politics for those localities across those more nebulous areas of human life. Are we seeing this already? I think so: SNP, "London", Green, Brexit etc.

At present however, the current mode is that these parties or groups all imitate and sound like the larger parties and hold such little faith in their own mission and purpose for the groups they intend to represent, when they adopt this approach instead of paving a new approach. They adopt the same rhetoric, the same sales pitches, the same flawed councels of perfection.

From councels of perfection to a confederation of imperfection: It might be an interesting future for politics:

Brexit: much effort for little result

So, for all the hype, nothing much changes – here or abroad. Specifically, in the EU-27, there is no substantial move either for or against "Europe", but nothing which will threaten the status quo either. And so ends an enormous amount of effort with very little to show for it. And the European Parliament still ain't democratic.