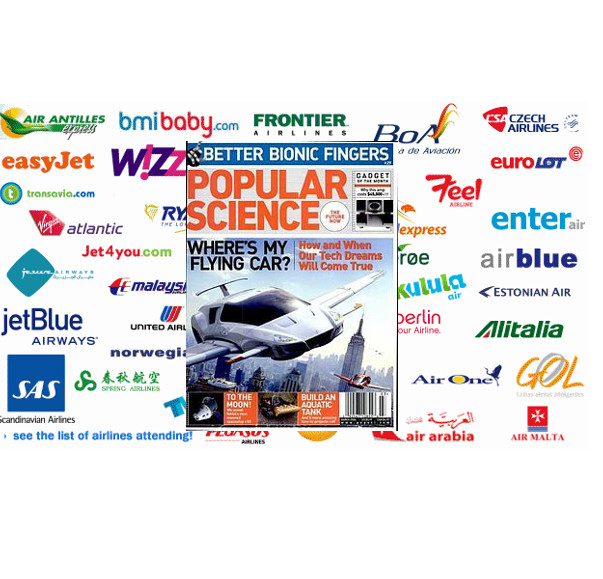 Personally, I've always had an inkling that "flying cars" were no more than "Pegasus"; that is to say combining two different elements of imagination to create a new combination eg "Horse + Bird Wings" = Flying Horse (or even Angel being a similar combination (Human + Bird Wings). Or "Car + Airplane wings" = "Flying car". I don't think I've held a deep expectation of seeing futuristic flying cars which is a staple of some science fiction visions of the future. Apparently many people, by contrast did expect such things, particularly when growing up in the 50's and 60's?

Instead, in some other science fiction visions, the emphasis was not so much on new-fangled objects as the trends and patterns of various forces that shape our societies such as economics and supply chains. These stories make some interesting visions of the conflict in human behaviour interacting within these forces. But that's a digression.

The vision of the above "flying car" super-imposed on "Budget Airlines" is to make a quick and simple illustration: A lot of the demands being placed upon "What sort of Brexit" are entirely likely to draw from the same error process:-

1. Take current object.
2. Search for another current object
3. Create desirable combination.
4. Make plans based on what is now leading to what will be.

Voilà "There's my Brexit plan, the best that money and the top brains can buy!

What actually happened between 50's/60's eventually led to what we're all so familiar with today: Budget Airlines - dozens a and dozens of them! Those invisible forces at work in economics and technology and the scale and complexity and duration, all orders of magnitude and interaction which are far more complex than the simple "formula" used above: 4 steps and one giant leap and voilà!!

I think the above illustration provides all the pause for thought necessary when considering the quality of output produced by so many morons on Brexit. As to why they should produce such dross in such quantity and in such majority of numbers on the one hand the bubble effect maybe but more to the point, "The Appearance of Power" dominates the creation of ideas for the arguments about Brexit:-

1. Domination of the argument by the Establishment (Bubble Effect). 100 different voices all end up sounding like 1 opinion (Flying Cars)
2. Domineering of relationships by the Establishment (Moral Assumptions). This displaces the complexity of the arguments (Budget Airlines) ie the technical understanding of those complex and invisible forces at scales not intuitive to our minds without deep learning and understanding of knowledge domains.

Both Dr. North (http://eureferendum.com/blogview.aspx?blogno=86335) and Pete North (http://peterjnorth.blogspot.co.uk/2017/01/brexit-into-abyss.html) have done heroic attempts to try to point out this difference, consistently only for shallow commentators to consistently do the very thing they've been pointed out as doing: "Where's my flying car?"

It's the sort of thing I first was drawn to reading Christopher Booker's ability to remain curiously curious about "accepted wisdom"/received nostrums and other such habits of thought in both groups and individuals:-