Can we have our cake and eat it too? 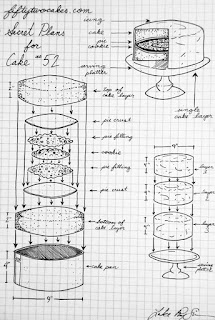 To sum up how the EU has been sold for so long to the British public, we can think of the analogy of it being a cake. The argument begins that if we joined the EEC 'cake' we could all bake a bigger and better cake together; with each nation contributing it's own unique ingredients to the 'cake mix', at the time called the "Common Market". Of course reassurances were provided that each nation would still retain "property rights" over it's own contribution of national ingredients, and hence the additional EU layers above these were necessary to administrate this.

Over time more layers were added, more nations joined and more policies powers were or "cake ingredients" were added. Each major layer was added with the signing of each of the Major New Treaties:-


Quoting the above source:-

The European Union is based on the rule of law. This means that every action taken by the EU is founded on treaties that have been approved voluntarily and democratically by all EU member countries. For example, if a policy area is not cited in a treaty, the Commission cannot propose a law in that area.
A treaty is a binding agreement between EU member countries. It sets out EU objectives, rules for EU institutions, how decisions are made and the relationship between the EU and its member countries.
Treaties are amended to make the EU more efficient and transparent, to prepare for new member countries and to introduce new areas of cooperation – such as the single currency.
Under the treaties, EU institutions can adopt legislation, which the member countries then implement.


This is a very succinct summary of how our "Cake" is sold to us. As you can see our cake was always designed to add ever more layers to it. 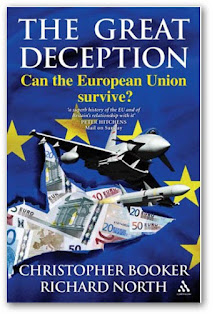 However in the combination of ingredients, the mixing, baking and designing of our cake, the question of the actual nature of the cake, what sort of cake are we actually trying to make, seems so simply to have been overlooked! What is a better cake? Is a bigger cake better? How much of each nation's ingredients actually contributes to making it better and do all of them agree on the sort of cake they would like to eat? Quoting the above introduction to The Great Deception by Christopher Booker and Richard North:-

"The  purpose  of  this  book  is  to  tell  for  the  first  time  the  real  story  of  how, through  what  had  come  to  be  known  to  its insiders  as  ‘the  project’,  the continent’s  politicians  had  for  half  a  century  been  seeking  gradually  to construct and to impose on  their peoples a unique system of government. Not the  least  remarkable feature  of  this  political  experiment  had  been  how few people really understood its real nature, aims and origins.

The  form  of  government  it  created  was  unique  because  it  was  designed  to place the nation states which belonged to it under a ‘supranational’ power, unaccountable to any electorate, ruling its citizens through the agency of each country’s  own  national  authorities.  Although  the  nation  states  and  their institutions  of  government  remained  outwardly  intact,  all  these  institutions, from  heads  of  state  and  parliaments  to  civil  services  and  judicial  systems,  in reality became increasingly subject to the decisions and laws of the new power that was above them all."


However, bringing the past up to the present in 2015, our cake is much nearer to it's completion of being fully-baked and "ready to eat". And now people across Europe are beginning to see what sort of cake they are getting, the above "selling the idea of the cake" is no longer possible. We're moving from Pro-EU/"Let Them Eat Cake!" sales pitches to "How much of the cake is each nation getting or being charged for"!

This is how our "EU Reform Cake" is now being sold to us today:- 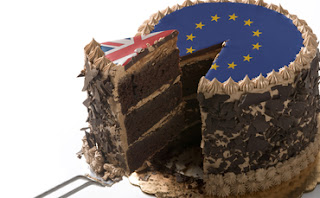 We are being told that we can change the cake or get a bigger and better slice with "less icing or nuts" on it or more "chocolate and sponge". But the actual cake has not really changed at all. And to understand why we have to understand how the cake is made in the first place. If we argue over the above ingredients, taste preferences we're being distracted from whether or not we ourselves can make and then bake our own cake to our own tastes and preferences! In my opinion that's what counts the most.

And to illustrate this is the modern arguments on the EU aka "Cameron's Reform Fudge" in the style and spin of "The Middle Way Fallacy" argument:- 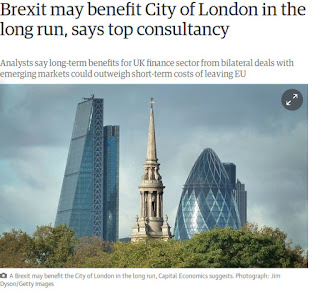 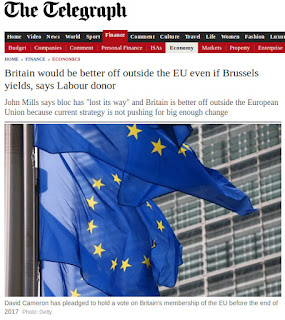 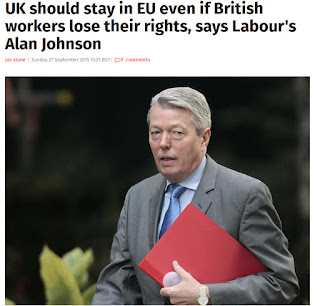 We're now being sold "a slice of the EU Cake" as "EU Reform". But coming back to those layers and how the EU cake is made: The Treaty Of Rome (1957)

The "Ever Closer Union" is as fundamental as the the self-raising flour in mixing the core ingredients when making a cake. It cannot be taken out. And if that you don't like that taste or it makes you feel ill or you think it's simply unhealthy then you have to decide to choose another cake.

Arguing about how many chocolate buttons we get given on our slice or how thick it is, are completely missing this central point about our membership of the EU Supranational Organization. This cake analogy is a crude simplification, but for the complex and very fascinating full story then read The Great Deception from cover to cover.

Effectively when it comes to answering the EU Referendum question we're not talking about a slice from one cake, we're talking about two very different cakes:-

Posted by Red Cliffs Of Dawlish at 11:50