How do you become a "eurosceptic"? 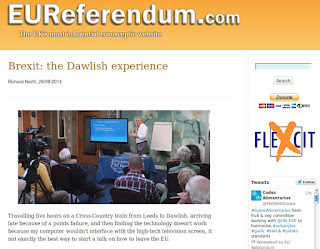 On Wednesday 24th September, 2014, at Dawlish in Devon, The Campaign For An Independent Britain organized and funded a Workshop on such subjects as:-

It was free to the public to attend. In answer to the title question, all the information you could ever need is contained above. However if answers were so easily assimilated by people, then there never would have existed much to the question in the first place. I hope this blog therefore attends to that reality and steadily invites more questions and more interest on this subject. Because that's how questions and answer truthfully do behave; like ever expanding horizons: the more you know the more there is to know.

To begin at the beginning, I remember vaguely as a young child my father complaining that "Europe" as an economic idea might work but that for political reasons it was impossible. Many years later, I came across an article that confirmed a very large mismatch between what the politicians who were Pro-EU had promised, what had transpired and how they were explaining this "gap" presently between: observed, actual results and expected, predicted results: It's Not That the Euro Will Fail, It's That It Should Fail

In modern political language this "performance gap" is obscured by "Spin". It seems to me in life in general, that people are very tolerant of their immediate friends and family's faults. But even within these social circles there comes a point when someone has taken our trust for granted and abused it's generosity of spirit too many times, for too long and we almost U-turn in our reaction from tolerance to defiance. Dr. Anthony Seldon writes on this subject of a loss of Trust in British Politics; which like "fresh air" is only missed by it's absence.

I would posit therefore, that this particular discussion is not about the details of the EU or Brexit, it's not about the principles or politics of these subjects. It's about "the thinking required for the subject in question". This is where beginning at the beginning really takes place or to use the more modern technical phrase: "Metacognition" required for discussion and to which Trust is such a vital precondition with which to ask questions and find useful answers; and why "Spin" prevents progress in our politics: Our politician's performance gap remains as wide as ever.

Dr. Richard A. E. North writes the eureferendum.com blog and one of his core phrases is "the intellectual architecture" required to understand the subjects of the EU and hence by implication "Brexit" and furthermore any "Popular Referendum" if it is to be shining light of enhanced democracy. In the Western Civilization tradition much is made of Democracy, and by contrast lack of democracy elsewhere in the world is considered an inferior condition; possibly one to which we allow ourselves to feel a sense of superiority? And yet there is an odd little fact concerning any EU Referendum the UK will hold on our current membership. The "first and only" Referendum we had was in 1975; fully 40 years ago in 2015, to which you would have had to have been 18 years of age to have voted on, meaning anyone under the age of about 58yro has never voted on this.

To return to that day in September on the coast at Dawlish and quoting Dr. North: Brexit: the Dawlish experience


On the day - reflecting much of the online feedback and the experience of earlier meetings - what I found necessary to emphasise is that the exit plan is complicated. Furthermore, there is a limit to the extent that one can simplify it, before you are misrepresenting the entire process.

If we look at a telephone from 40 years ago, and look at the latest devices, there is a huge leap in the degree of complexity – matched of course by a massive increase in capability. What has happened with telephones has also happened with government and we could no more go back to the simple Bakelite telephone than we could go back to the far more simple style of government which prevailed in pre-EEC days.

The parallel or echo or reflection is fascinating: In the time from that "first and only" vote over 40yrs ago, the complexity of our membership has changed in orders of magnitude without a single vote on it. If you want to consider the value of all the preceding, it is possibly encapsulated in this curious fact of our membership that abstracts most of the above themes so far discussed.

Suffice to say, I came across lots of different materials and opinions and proponents of Brexit and variations in "eusceptic" options, before finding eureferendum.com and then attending this talk and workshop in Dawlish. Now I would borrow a coined word from White Wednesday (see blog list) and say that this long journey from becoming a "eurosceptic" has finished and I am more accurately now a "Brexiteer"!

Finally, on the central idea of this blog post, imparting one idea whatever your own beliefs and understanding and effort invested into "seeking the truth" of matters: This blog is named: "Red Cliffs Of Dawlish". Why? Is a question not with a single answer but with many answers:-

In answer to the title question: There's many answers: But do any of them belong to you? That's a question I would ask of any interested readers to this blog and towards any potential vote in the UK's Referendum on the EU: To Leave or To Remain: That is the question, afterall. But do you understand it? And hence can you give YOUR answer and not someone else's?