The Vortex Model: A new way of looking at our solar system - Very interesting, great presentation, but is it actually accurate?

Over the Summer I was helping teach about the Earth's Orbit within the Solar System at a school for a very basic introduction to the ideas of the development of science knowledge of the:-
Of course these models are often not to scale, and static. So when you come across a new way of looking at the solar system and it's presented brilliantly you are naturally very interested in it's potential. 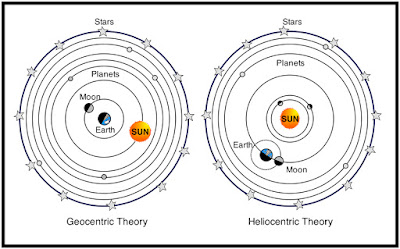 However as with teaching the solar system at a basic level, when you look at the details it becomes much more complicated as Signal To Noise blog that suggests many areas of inaccuracies in the above:-

1. Jupiter is in the wrong place.  The video has it located between Neptune and Pluto, when it is between Mars and Saturn.
2. The video asserts the heliocentric model is wrong because the sun moves through space.  Not true.
3. It has the Sun moving along its axis (relative to what?), when this is not how the Sun moves in the galaxy.
4. It visualizes the planets lagging behind the Sun, which is not accurate.
5. It asserts the Sun drags planets along through space (in its wake), which is totally wrong.
6. It confuses vortex (circular fluid motion) with helix (a spiral path).
7. It makes wild claims about how spirals equate to life and asserts this leads to some new interpretation of physics.

That said, such flawed models we hope are merely manifestations of flaws in the author's own understanding of the arguments. In deriving our conclusions we must always allow room for proportional scepticism so as to encourage proportional debate; even if the above is wrong, the attempt if honest provokes interest and considerations of re-shaping our conventional model of understanding.

Unfortunately, and especially the latter is often more true in politics: The argument is flawed because the intention and motivation is to mislead audiences deliberately distorting reasoning to fit a preconceived agenda of the author or end result as opposed to an objectively derived model of understanding to share with others and even use to build newer and stronger models of understanding superceding such previous attempts.

Distinguishing between these two types of flawed arguments is very important for the EU Referendum debate to provide the best models of understanding in their accuracy to then present to voters in a form of communication they'll understand. 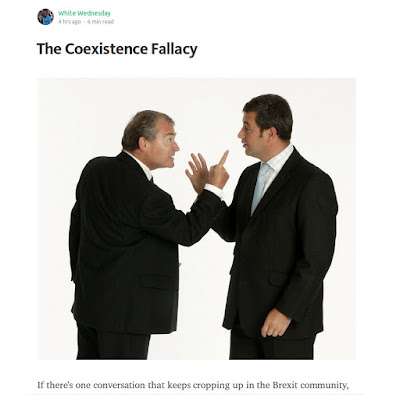 Interestingly White Wednesday's latest blog (above) attempts to tackle the former issue in the Brexit side of the debate: Namely the huge laundry list of descriptions about which Brexiteers or eurosceptics who all want the same thing: To withdraw from the EU, but who disagree on the correct model of understanding that explains these descriptions without contradicting relevant descriptions included as part of a complete explanation. There's a huge laundry list of disparate descriptions here at reddit for example: A Compilation of Reasons to Leave the EU by UKIP supporters.

The Single Market Interim Positive Brexit: Using EU-Centric Frame of Reference: Hierarchy of concentric circles under the EU: All models look inferior; hence The Norway Option is an INTERIM solution to withdrawal from EU Treaties - initially and only: But on that criteria it is rigorous - for the time-being ie ~2yrs via Article 50!!

But what they don't have is a theory of explanation to systemize/organize/order these descriptions and hence assort which descriptions are incorrect facts, ie opinions, which may be correct but are not relevant and which do add up to a complete argument for Brexit that is rigorous and a stronger argument than the corresponding Remain argument! In Focal Point: Critical Thinking I tried to point out an example of a Remain Argument where most of the argument for Remaining was related to The Single Market and much much less directly to Political Union under EU Treaties. Brexit for Beginners even pointed out what is the EU? and this as the main argument for leaving. 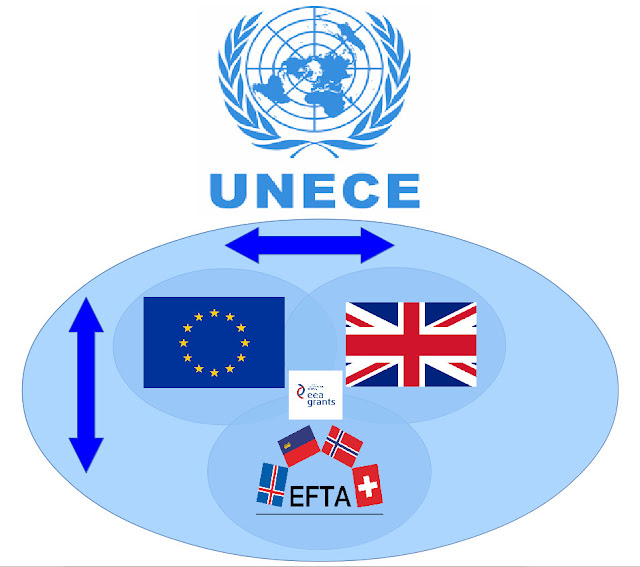 The Positive Global Market Vision: UNECE as the wider Frame of Reference: Nations become "Equals": This orders information across a time dimension: Something a "laundry list" of descriptions does not provide such meta-information of as well as "false information" to be culled or ordered appropriately and proportionally


Coming back to White Wednesday:-

"There are others I could add to this list but here’s another point: Some of the positions in the above conundrums may be simply assertions and factually dodgy, but they’re no less powerful for that. It is thus not just a case of different ‘egos’ getting in the way (as is often said); there are very real differences of substance here."

"This is why the range of Brexit views cannot easily coexist and this drives the temptation to have no exit plan at all (which appears to be Vote Leave’s strategy). The supposed logic of this approach, starting with a belief in that innocent-looking ‘menu’ of arguments, is that one should indeed deliver all of the above Brexit arguments in the hope that different ones will stick to different voters."

One of the problems with the range of Brexit views is that they are not only incompatible but also they currently serve to increase confusion because as noted arguments can be flawed due to limited understanding or else flawed due to deliberate misleading intentions.

The ruling example of this is the presentation of a limited array of options of all compromised relation to the EU-Centric Frame Of Reference. This is a classic trick used by deceptive arguments. It also allows false qualifiers over Brexit to amp up the conditions to a SUPER-relationship with the EU that is impossible; again setting a straw man argument for neutrals and tricking eurosceptics via their own greed. The best example of this is the immigration argument to point out that all eurosceptics would not tolerate the EEA for perhaps 2-4yrs as it requires freedom of movement. But within those 2-4 years and beyond we certainly would have more leverage for improving immigration than if we stay in the EU during that time!

The other technique is the false analogy of influence loss: The "Fax Democracy" or to use it's updated version "E-mail Democracy": But it is a false analogy used by the former Norway PM. And this is the real problem: We must remove the lies and deception from The Great Deception first before we can then assess the quality of arguments.


The "Renegotiation" Is A Matter For The "Remainders" 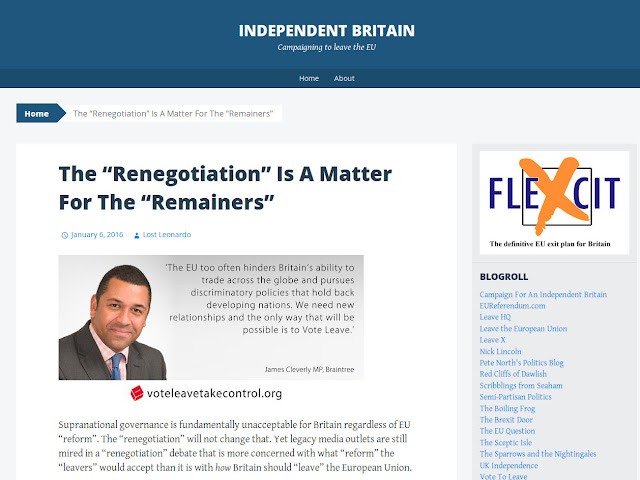 This is very necessary, because the burden of proof is on Brexiteers to demonstrate higher levels of understanding to which to point out that it's not only worth leaving the EU but also removing the deceptive arguments our members seems to breed in our membership of the EU in those who support it! That is something Brexiteers cannot be allowed to be accused of! And it really is why Vote Leave are condemned and damned in their attempts to win the Electoral Commission's nomination; which is hardly surprising given their close ties to the heart of the Establishment which is the reason we're in the EU in the first place as per The Political Food Web of Prestige.

But as Lost Leonardo points out: The track record is there for the opaque and veiled "EU Reform" of David Cameron and the Pro-EU "in disguise" strategy they continue to insist on taking and beguiling the general public through the mass media with. quoting:-


"The established “leave” campaigns have not helped themselves in this regard. As recently as June 2015, Vote Leave CEO, Matthew Elliott told the London Evening Standard that: “If the Government gets a two-tier Europe, we’re very much in”.

This motivates them to use the frame of reference of the EU-Centric position as opposed to the Global greater frame of reference which the likes of Dr. RAE North in FLEXCIT advocates as his position. I would contend most of the output of the Pro-EU advocates conflates Single Market for EU for this very reason: Without this ruling frame of reference, their arguments are seen as very narrowing which in turn increases the emotional pitch of FUD of leaving the safety of the EU.

All the above do not matter if we withdraw from the EU Treaties, which is what Brexit is: A starting point outside the EU Treaties. A change of direction from the political. Without this, I contest the Pro-EU arguments look like a description without an explanation: "EU Reform" ; "Next New Major Treaty" ; "x1 Referendum >40yrs" ; "x7 Major Treaties without a public vote". The instability of the EU Treaties for all our membership is what drives the political uncertainty and lack of "safety": Our government has been so afraid of the public rejecting the EU Treaties that it has allowed the "pressure-cooker" to boil over to this singular point event and crammed in all the requisite issue of over 40yrs into this one referendum!! It's too fragile and not flexible enough.

In the next blog we'll see examples of just how there is no acknoweldgement by the Remain/Pro-EU advocates of this change of reference and hence position. They're not arguing different points of view about the same position(!), because they're not even acknowledging the position from which Dr. RAE North et al are making their arguments concerning:- 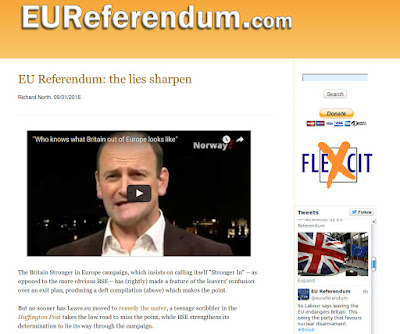 Posted by Red Cliffs Of Dawlish at 07:45