The challenge here is to summarize a history stretching from 1970 and even beyond the present past 2020. However that's plenty of time with which to build a very strong evidence basis concerning a problem with Fisheries Policy, to quote FLEXCIT: 14.0 Fisheries:-

To quote and paraphrase John Ashworth's Fisheries work above: At the end of June 1970, just before the UK was in the process of joining the EEC, the original six members "created the Fisheries regulation 2140/70".


"In laymen’s language, that is, on becoming a member of the then EEC, now EU, the fishery limits bestowed on a Nation by International Law, are handed to the EU, to become Community waters, shared equally and without discrimination, with every other Member Nation."

"As Britain had the largest living marine resource within the EU. We had, by our Accession Treaty obligation share it with every other member – end result – our vessels had to go."

"The British people were not told these facts, in fact the very opposite."

What is significant is the timing of this new regulation which became adopted into the acquis communautaire before the UK Prime Minister Heath had completed his formal application for membership to the EEC. And therefore the PM lied about the Fisheries in order to successfully gain membership by adopting the entire acquis as part of the requirement of the EU Treaties rules themselves.

On "EU Reform" applied to Fisheries:-


"This so-called reform is not the CFP, but a political management tool that is a derogation from the CFP, and this “reform” that our British politicians claim to be a wonderful achievement to obtain, is actually part of the political process to full integration – community waters – community fleet – based on non-discrimination, as stated in the Treaties."

Further problems are highlighted by the fact that Norway did not join nor did Iceland and then Greenland left - Because of Fisheries to a large degree. Coupled to this:-

"Spain, whose application was filed in 1977, would join. Indeed, along with Portugal it did join in 1986, bringing a massive fishing capacity with little resource, tipping the capacity to resource ratio the wrong way.Things were further complicated by Greenland leaving the then EEC in 1985, another loss of resource and again, because of fishing."

"Britain tried to secure a 50 mile exclusive fishing zone, and later attempted to seek a higher percentage share of the quota, but the other Member States said, “no, go and read the Treaties” – something the British are not good at."

"The Accession of Spain and Portugal sailed through our Parliament during 1985, without hardly any questions being asked."

"Genuine reform can only be implemented by unanimous agreement. Meanwhile, the integration process rolls onwards and the obliteration of the British fishing fleet continues, in a most devious manner."

The deviousness all came from the British side"

What happened with the "skewed fishing capacity to resource ratio" was that the British politicians had to find a way to decimate the British fishing vessels to make space for the Spanish:-

"These same people had a problem:- knowing full well that the execution of British fishermen had to take place, but having to do it without the British people knowing.

In the second half of the 1980s, and into the 1990s two situations were happening: large amounts of juvenile fish were being dumped dead back into the sea, and the sand eel stocks, which play a crucial role in the food chain, were being hammered.

The industry highlighted these problems, and through some brilliant research by the Marine Laboratory in Aberdeen, groundbreaking information was provided on how, by changes ot the gear design, the small fish would not be caught.

Our own Ministry firstly denied either of the events were taking place then secondly went into silent mode, appearing to want to take no action. At that time we did not appreciate why.

One area where the EU excels is if they have a problem, sometimes a crisis ensues which they can use to solve the problem and  at the same time further the integration process. This is called a beneficial crisis."

"Even now the present Westminster Fisheries Minister George Eustice MP states he is a “strong eurosceptic”, who is pleased with his Ministry’s so called “CFP reform”.

"As far as the UK is concerned, the fundamental principle on which a policy should rest is that the fish and other sea creatures within the UK’s fishing zone of 200 mile/median line are the property of the nation as a whole. Custody of that resource lies with the central and devolved governments."

"Meanwhile the only “British waters” are so limited that the fishing of those waters thas now been relegated to a cottage industry which only exists thanks to a derogation within the 6 and partial 6 to 12 mile limits, which the other EU member states are under no obligation to renew."

"This  provided  a  graphic  illustration  of  the  way  the  CFP  worked.  Access  to fishing grounds had been dominated by political considerations, on the basis of "equal  access" to  what  was defined  as  a "common  resource"." 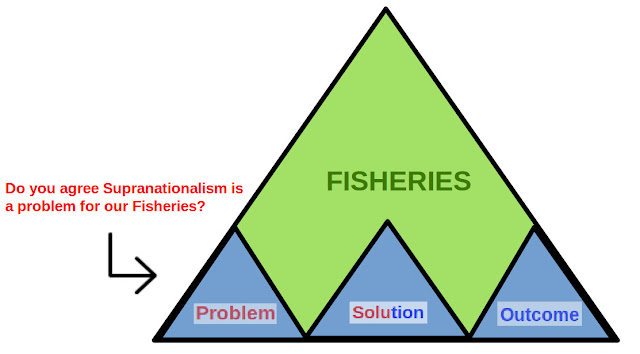