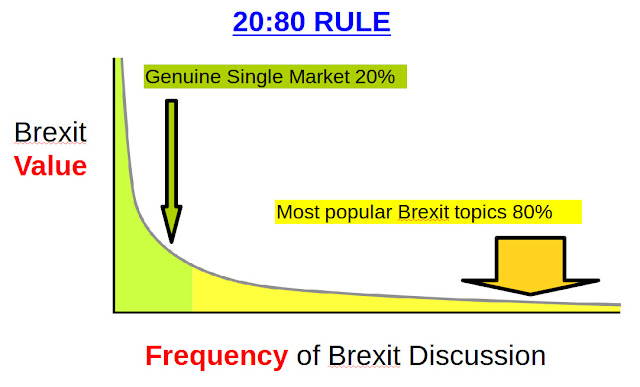 This is now the 81st blog post, so it seems appropriate to try to change the nature of Brexit Discussion to the essential "Positive Vision" component. Looking at the above graph, this is an illustration of a Power Law, in the above case the form of the 20:80 Rule aka The Pareto Principle that people are more familiar with:-


"The Pareto principle (also known as the 80–20 rule, the law of the vital few, and the principle of factor sparsity) states that, for many events, roughly 80% of the effects come from 20% of the causes.[2] Management consultant Joseph M. Juran suggested the principle and named it after Italian economist Vilfredo Pareto, who, while at the University of Lausanne in 1896, published his first paper "Cours d'économie politique." Essentially, Pareto showed that approximately 80% of the land in Italy was owned by 20% of the population; Pareto developed the principle by observing that 20% of the peapods in his garden contained 80% of the peas."

Namely and only in this case to illustrate as opposed to measure accurately: What we talk about when we talk about Brexit and our Referendum on the EU is prodigiously, prodigiously distorted. It's a reflection on the extremely low quality communication that is passed off as national decision-making in the UK/Britain today by our "leaders".

The even worse news is that the above 20:80 Rule is merely more memorable for illustration given Brexit discussions. I have not measured and categorized all the Brexit discussions the volume in the legacy news-media and I suspect in our politics conducted in Westminster but the above Power Law type is "too generous" the reality I guess is much closer to 5:95 or even 1:99...

That said, we can use the 20:80 Rule to illustrate a fundamental problem with the EU:- 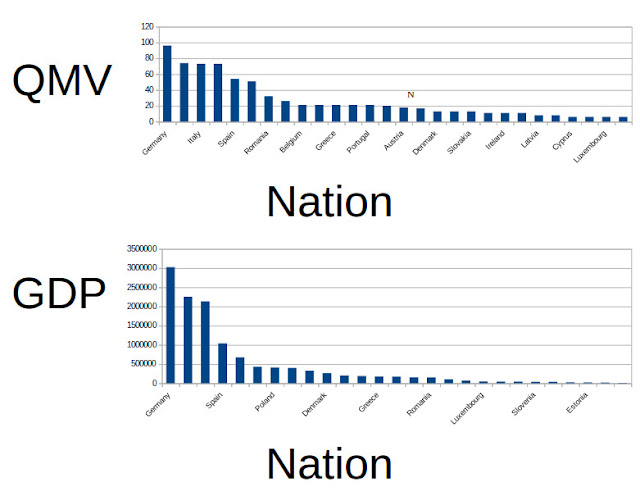 The QMV voting percentages in the EU Parliament for example follow broadly population. But the effect of comparing GDP of EU Members shows a similarity to the Power Law above. Namely the economic power of a few large members suggests an uneven distribution of economic importance.

Here's the suggested problem: The UK as a member of the Supranational EU gains advantage ONLY from Single Market membership. It actually receives disadvantage from Political Union membership; where different political priorities interfere with the progression of the Single Market and with the growth in World Trade.

Therefore I would say a lot of the Brexit discussions FAIL to properly address: What is our desired outcome when/if we leave the EU? The answer is the reformation of the Single Market to globalization without the complications of Political Union (eg EURO). The problem is Supranationalism prohibits this process for the UK: Instead we have the deceptions of our politicians who are incompetent and liars and do not appear to have any motivation to resolve the problem, in fact they "prolong it". 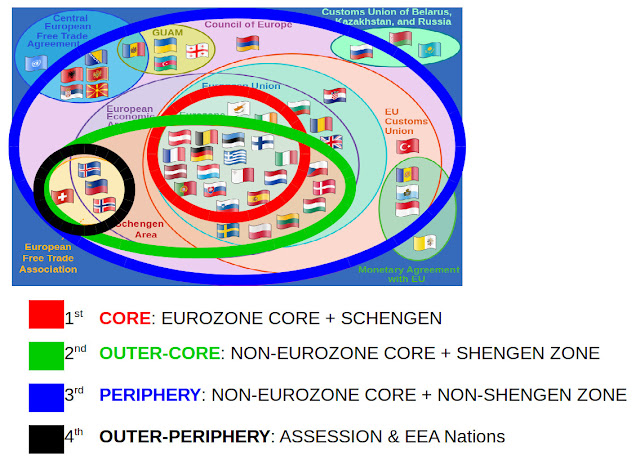 As per Dr. RAE North's FLEXCIT: The Market Solution To Leaving the EU - 11.0 UNECE:-

"Even within ther EU, there are different levels of commitment, with the inner core defined as the eighteen eurozone members iniwhat is often described as a Europe of concentric circles. The non-eurozone Schengen and then non-Schengen members are described as the outer core zone, while accesssion countries and EEA members are part of the "periphery". Neighbours are known as the "outer periphery".

"This image of concentric circles conveys the reality of an EU-centric Europe, where those furthest from the centre have least power."

What we can clearly summarize:-
And yet we have EU Treaties that tie all these nations together. The next step is:-

Effectively the UK in it's own decisions should be considering that the former is not a realistic nor desirable outcome. So the question remains why have we not had more discussion on the creation of a genuine single market and focus on what this really means?

Even the former has not been fully explored and discussed in the UK:-

FLEXCIT: The Market Solution To Leaving the EU - 11.1: Breaking away from Brussels:-

"For instance, when a group of European think-tanks in 2013 published a proposed draft treaty to take the EUropean Union on from the Lisbon Treaty, which they called "A Fundamental Law of the European Union", they defined the new status of "Association Member", whereby states could take part in specific policies of the EU - such as the single Market - without committing to the full acquis. This would accord a position of less power and influence to those states which adopted this status." 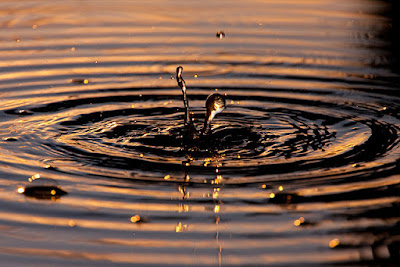 The biggest (political) "splash" is in the center!

Looking at the existing alternative:-

"A new EFTA-EU relationship, therefore, would still put it's members in a subordinate position, in the outer circle with Brussels still in the central, dominant position, perpetuating the idea of a Europe of concentric circles.

Despite this very obvious handicap, the "No to EU" coalition in Norway would welcome this development. There is considerable antipathy towards the Agreement and an aspiration to replace it with a free trade agreement. Here, British membership of EFTA is seen as increasing the negotiating power of the bloc. That position may be strengthened by other member states which may wish  to leave the EU." 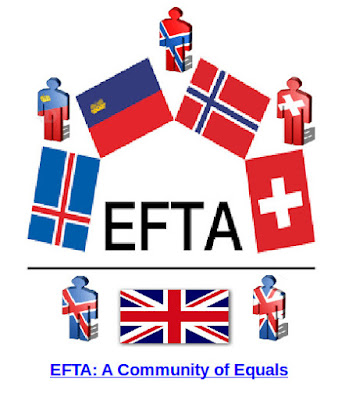 There's no protestant or catholic when it comes down to trade.

With possibly Denmark as well this would the ~20:80 forging the Single Market while the rest forge on with Political Union.

Posted by Red Cliffs Of Dawlish at 06:52