Before looking at the potential Solutions if we agree that there are indeed problems:


"The Common Fisheries Policy is a biological, environmental, economic and social disaster; it is beyond reform.  It is a system that forces fishermen to throw back more fish dead into the sea
than they land, it has caused substantial degradation of the marine environment, it has destroyed much of the fishing industry, with compulsory scrapping of modern vessels and has devastated
fishing communities."


Then we must establish the exact nature of those Problems, to which John Ashworth The Common Fisheries Policy – Part 1 provides the exact description of the rules of the EU, how it works:-


"When a Regulation is created, at the top it states the articles within the Treaty the regulation takes its authority from, and as soon as a Regulation comes into force, it in turn becomes what is known as the acquis communautaire:-


In understanding the workings of the then EEC, now European Union, the above paragraph is probably one of the most important aspects to have to learn.

Firstly – what is this acquis communautaire. -. It is all EEC/EU treaties, EU legislation -(regulation), international agreements, standards, court verdicts, fundamental rights provisions and horizontal principles in the treaties such as equality and non-discrimination. In short, all EU-law.

The UK joined the EEC in 1972 and has been a member of the EU for 44 years and a part of the acquis system above. Dr. RAE North in FLEXCIT: The Market Solution - 9.0 Regulatory issues provides a summary of the full weight of membership to this system for the UK:-


"Since there would be no obligation to retain the remainder of the acquis, theoretically, leaving  the EU could  give relief from around 15,000 acts (although  by no  means all are  applicable to the UK). Amongst  others,  high profile policies such as the CFP and the CAP, would be amendable to abolition if there was the political will to do so, and the nation was prepared to accept the consequences."

Of which, Table 3: European Union Legislation in force Fisheries Acts = 1,170. 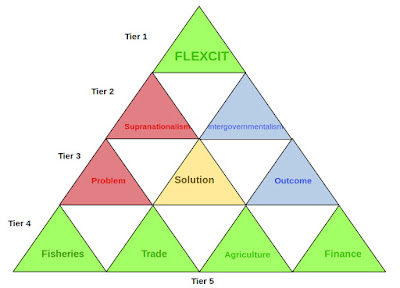 Solution = transition or "bridge" between Problem and Outcome

If we look at our FLEXCIT model we remind ourselves what is the "problem" we are trying to actually solve. Is it economics? No It's political. We saw in FLEXCIT Application: 1. Fisheries Problems of Supranational membership. This is why "keeping all the Single Market regulations" in place is undertaken on withdrawing from Political Union.

The solution is as per Dr. RAE North in FLEXCIT:-


"To  allow time  to revise  our  law  books,  a  holding  process  will  be  needed.  The best option is to repatriate the entire body of EU law, converting it en bloc into British law (by a device similar to the ECA)"


"As far as the UK is concerned, the fundamental principle on which a policy should rest is that the fish and other sea creatures within the UK’s fishing zone of 200 mile/median line are the property of the nation as a whole. Custody of that resource lies with the central and devolved governments."

"The first priority, therefore, is that control/competence is returned back to Britain."

Here we have the solution, repatriation of the acquis does mean full "control/competence is returned back to Britain."

This comes back to the quote above concerning removing Supranationalism to quote Owen Paterson Consultation on a  National Policy on Fisheries Management in UK Waters:-


"Since its inception, it has been dominated by political considerations that have had little to do with good fisheries management, so the decline and impending collapse of British fisheries has to be laid squarely at the door of the CFP."

"There is now increasing evidence that the reason for the failure is that the core regime applied by the CFP is irredeemably flawed, not least in terms of its appreciation of fish biology, the quality and interpretation of data, as well as the treatment of fishermen"

To come back to John Ashworth:-


"However, as far as fisheries are concerned, it is no good scrapping one régime in order to establish another equally bad system. Withdrawal presents us with a once-in-a-lifetime opportunity, to show what can be achieved in an area that contains one of the finest marine resources in the world."


"But the distinction has been made, once we regain Sovereignty of a national resource, the full British Fisheries Industry scope is set according to International Law that allows Sovereignty to be clearly defined and not obfuscated under Supranationalism (which we see persistent examples of):-
An inshore industry could be built around the 0 -12 mile limit, which would have a beneficial effect on coastal communities through tourism, recreational fishing, employment and other ancillary industries. All could be administered locally."

"The offshore Industry would be based on the 12 to 200 mile/median line, and then you have the straddling stocks and reciprocal arrangements, which brings genuine friendship between fishermen of different nations. When other nation’s vessels fish in our waters they would do so under our rules."

What we see is that there is no "leap in the dark" there is a orderly two-step withdrawal that regains Sovereignty and removes Supranationalism. Remember that the Solution is not the Outcome, it's a bridge FROM Supranationalism TO Intergovernmentalism:-

This simple distinction is not made by so much of the political commentary on this subject not just say on Fisheries but on Immigration or any other "Policy Outcome Aspirations". The process of transition itself.

What this solutions does not provide (Outcome) it does provide in terms of relief as per Owen Paterson above, relief from Bad Politics interfering with good fisheries management. It also will help provide a stronger scientific and technical basis for Fisheries Conservation, Sustainability and Recovery and hence a thriving industry administered locally by people who have a vested interest in it's welfare and their own. For example John Ashworth again summarizes:-

Two essential features are needed for a viable fisheries policy:-


"You must have fishermen on side to make this work, but again, under the North/Paterson proposals, this is far more likely than under the current EU- controlled regime. The attitude it has engendered is that if I don’t catch it, some other foreigner, even though it is another EU citizen, will get it, so I will get in first."

"Personally, I am strongly in favour of the model used by the Faeroe Islanders which operates in a diametrically opposite way to the EU system of setting for each species a total allowable catch on an annual basis, often based on dubious research. In my view it is no good working from the top of the pyramid downwards. Research should be directed at the base of the pyramid upwards; starting with the food source. Once you know the availability here, you can calculate what can be sustained at the top. If for example you have a collapse of the base, you have to fish the top hard, the very opposite to what would happen now."


And on the problems in-built into the "DNA" of the Political "Ever Closer Union" Supranational EU:

"Ranged against us are those who don’t want the Nation State, and those reformists who either don’t understand the workings of the EU, or else who have a hidden agenda. If they really believed in reform, they would want to get rid of the principle of equal access to a common resource without discrimination. However, such reform is impossible because of the thinking behind the EU Common fisheries policy, which is incapable of beneficial reform along the lines suggested here as it violates the very principles of integration enshrined in the EU treaties which it was designed to promote. Unfortunately, so-called reformists never acknowledge this harsh reality."


"Leaving the EU per se is no solution in itself. It is only the beginning." ~ John Ashworth The Common Fisheries Policy part 7: FleXcit: Our fisheries’ future.
.