The Great Deception: A Shift in Attention 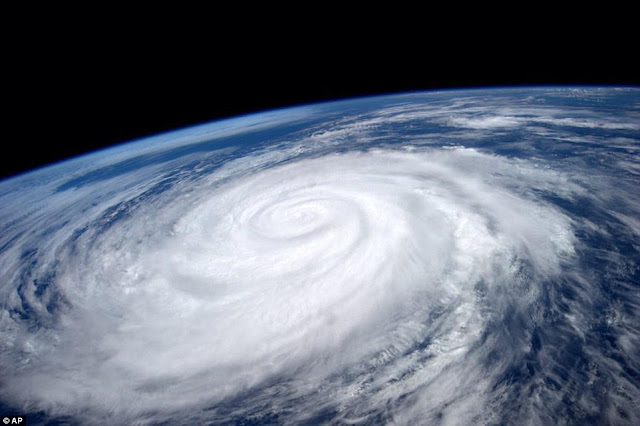 Higher perspectives in time and space: So calm above, what lies below?

Dr. RAE North in EU Referendum: open that DOR points out the simple message required to be transmitted to voters:-


"Hence, enter the open DOR strategy: Debunk; Offer; and Reassure. The first priority is to Debunk Mr Cameron's deal, and ensure that the public are fully acquainted with the fact that he is perpetrating a fraud on the British public."

1. The Great Deception: The future follows the past


Here we have many details, a history of evidence as per The Great Deception and summarized by Christopher Booker:-


"Winston Churchill’s call for a “United States of Europe” in 1946, which led two years later to the “intergovernmental” Council of Europe. But no one was more scornful of this than the Frenchman Jean Monnet, who had a wholly different model in mind, first conceived back in the Twenties. His “United States of Europe” would be centred on an entirely new kind of “supranational” government, able to overrule the vetoes of any of its individual member states."


"When Monnet’s first bid to move straight to the complete political union of its original six members was rebuffed in 1954, he and his allies realised they could only achieve their real goal step by step."


"When, in 1961, Britain first applied to join “the Six”, Harold Macmillan and Edward Heath had been fully briefed by Monnet’s allies as to the project’s ultimate goal, full economic and political union. But papers released under the 30-year rule show that, at the end of June, the Cabinet accepted their urging that, for “presentational” reasons, this should not be revealed to the public or Parliament. British entry should be sold as being only to a “Common Market”, concerned just with trade and jobs."


4. Britain taken in by Heath


"His Europe minister was sent to plead with Brussels to keep quiet about its already emerging plans for a single currency (another Monnet idea). And although we were repeatedly told that British entry would involve “no essential loss of sovereignty”, a secret Foreign Office paper, released 30 years later, shows that the government knew how important it was to conceal just how untrue this was."


"In the early Eighties, much more ambitious plans were afoot for a further leap forward to integration."


"The 1992 Maastricht Treaty on European Union brought out into the open the next instalment in the march towards the ultimate goal, centred not just on full “economic and monetary union”, including Monnet’s single currency... but also much else, never fully explained at the time."


"Tony Blair’s ambition to be “at the heart of Europe” led him to collaborate fully with moves to make the European Council (another Monnet idea) the EU’s political “Cabinet of Europe”, with its own foreign and defence policies, and also towards giving the EU its own “Constitution”, to make it in effect a sovereign government on the world stage."


"After the “Constitution for Europe” was in 2005 rejected by French and Dutch voters, virtually the same document was then smuggled back in as the more harmless-sounding “Lisbon Treaty” in 2007."


"Almost everything about Cameron’s “treaty” to give Britain a “special relationship” with the EU is yet again smoke and mirrors, not least the insistence that it is “legally binding and irreversible”. Under the Vienna Convention, a treaty is only valid when the signatories can guarantee delivery of what they have agreed."

It's worth assessing this history of the EU because one of the founding principles of Jean Monnet was to ensure a Supranational government above national democracies could prevent wars in Europe via pooling political power above those nations.


But what we see is a long history of deception to acquire those powers. The damage done to nations to acquire those powers exists today in the EUROZONE Crisis, in the state of Greece. At the same time the EU has been adding more members to ensure it is the Regional centre of power via the Eastern former Soviet states. Naturally Freedom Of Movement from weaker economies has been part of this agreement to promote growth in these economies after decades of stagnation behind the Iron Curtain. But this has inevitably led to a conflict of the EU with Russia in prizing more states via numerous methods into it's political sphere of influence. 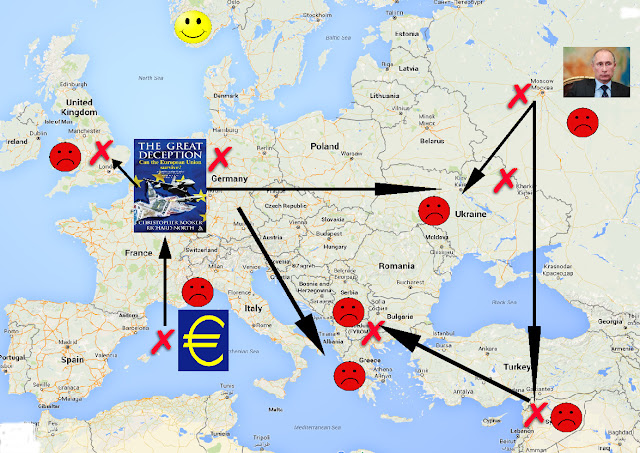 The Great Deception: Today - Where has your attention be drawn to in the Legacy News-Media and by Politicians and where should it be drawn towards?

With this war in Ukraine and sanctions in Russia, comes Syria. Here Russia also has the facts on the ground driving the migration crisis currently into Macedonia. Already the high youth unemployment in the Eurozone is not a suitable destination for many of these migrants.

Yet the UK has already had it's mass immigration "helping" the Eastern European nations as no doubt the full intention of the EU has been and conducive via the Supranational overriding of democracy so that governments past and present can simply ignore the electorate's preferences whether or not those preferences are either foolish or well-reasoned.

And currently we have David Cameron perpetuating this cycle as it grows into a stronger and stronger political storm increasing fragility and uncertainty spilling over to markets with knock-on effects around the world.

What we see with the likes of Trump or Farage or Podemos in Spain or Syriza in Greece is a growing uneasiness with those in power who control political power and feed it ever higher and more central away from people in the politicians bid to control meta-politics ie geopolitics against Russia with predictable results of war. The EU has not stopped our governments own stupid and bloody foreign policy in the Middle East either exacerbating the cultural and political transitions of those societies as closed-communities become ever opened up by globalization, mass communication and growing networks of information distribution eg Internet. 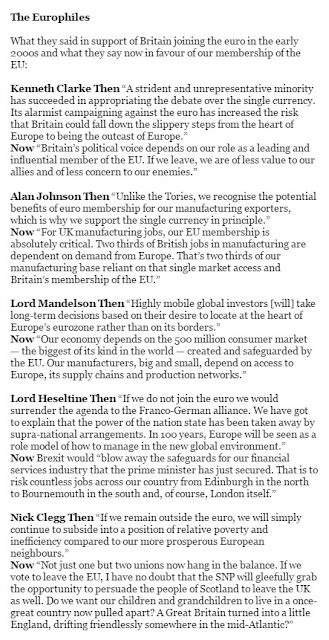 The Sum of David Cameron's "fraudulent new deal": The same broken arguments of The Great Deception Then & Now

3. Real Democracy: Will the patient take the medicine?

There is an unspoken acknowledgement in the Pro-EU Remain supporters whether or not they have fully realized it. In their arguments for EU Membership there is very little acknowledgement of the Great Deception towards "Ever Closer Union". From that, they concede the core of the argument that membership is positive. Instead we get the deceptive "EU Reform", the light at the end of the tunnel, despite the long duration of political storm clouds over Europe under the EU.

One of the outcomes of this type of argument is the attempt to make reality appear as if there is no way the UK could leave EU Membership because our interestins are tied up with what the EU has done for us. A good example is this recent blog post by Dr. RAE North:- 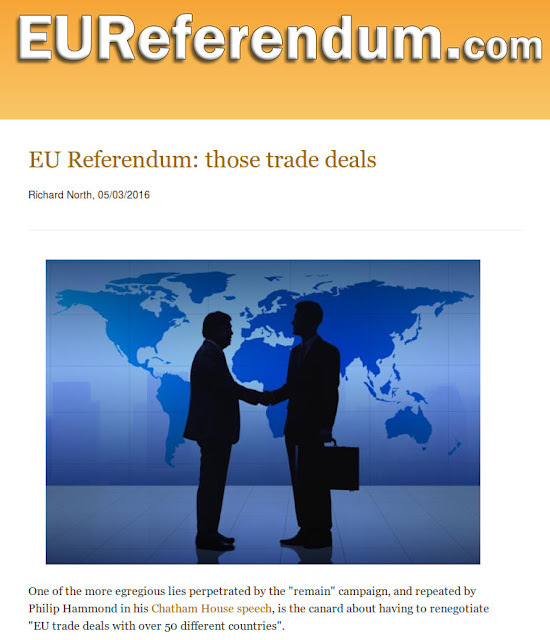 The message here by Philip "lying scum of the universe" Hammond is that it is not within our political right to cease our membership with the EU despite all the laws at international level above the EU that set out precedents for nations to be able to amicably and fairly do just this - so long as they are careful with each other.

This is one side to another side: There is also no alternative to which we get study after study after study looking at "What happens to the UK after Brexit" invariably then making up Economic models based off garbage scenarios that are not clearly defined but in fact are erroneously defined:-


If the UK leaves the EU, any path it chooses would carry economic costs 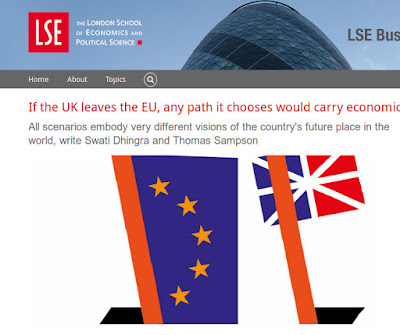 This is not Scientific Method - !!!

I looked at the source paper. I then looked at the references and indeed the only possible relevant link reference on the question of The Norway Option.

When I studied science at university, for my dissertation I had to studied a specific area. I ended up reading the TOP SCIENTIFIC PAPERS in that field, by the research groups who produced it. I knew the top four names from which a lot of progress had been established and hence to which multiples of secondary science had been successfully conducted to gain new details to add to these original papers conceptual shifts.

If I was looking at this question I would split up the top research on each possible category of Brexit: The Norway Option, Swiss Bi-Laterals, WTO/FTA etc. I would know the names of the top researchers and reference their works and other works around the context of those primary works.

This is how a body of knowledge is developed within a specific knowledge domain, coming back to "joining the whole" from The Leave Alliance: Sharing Knowledge. We know this works in this political subject of Brexit as per FLEXCIT: Changing The Political Reality.

So what happens we this does not happen on an epidemic scale? Eventually people lose trust in the state, there is a disconnect between the state and society and it throws up any visible alternative no matter if their arguments are poor too.

What are we looking for that can help here? An alternative Offer:- 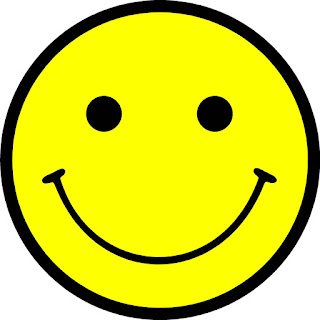 Posted by Red Cliffs Of Dawlish at 08:21