Referendum: Clear Choices Ahead & Behind 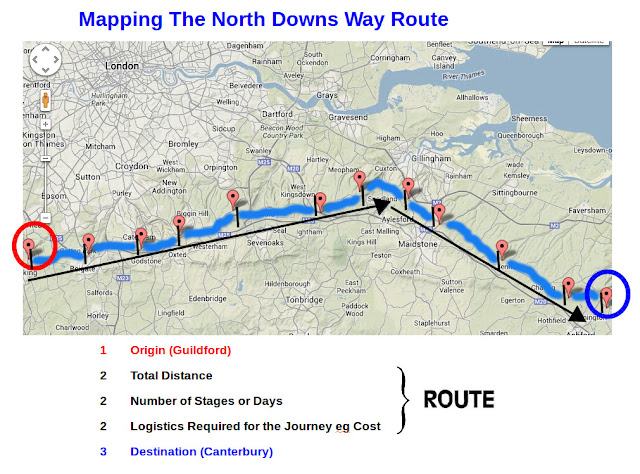 The art of sales or marketing/advertising is often the ability to persuade. And the ability to persuade people when the actual product is either not wanted nor useful or in good quality is to substitute such evidential "virtue" with deception and that is done via introducing types of error which confuse the customer into thinking the exchange of their hard-earned money has higher value than it actually does to them for the item that they are sold.

I can think of such confusion from telesales marketers, sales people and in this case politicians join such illustrious company. When we can model what actually is the right context then we can ignore the various errors introduced to trick and deceive us by constantly keeping in mind, in this case the actual map (The North Downs Way) and core details:-
If we KNOW what our destination is, we can create the right route to that destination. But we also must KNOW what our origin is and how it is different from either the fake version being sold to us and also know that it's not the same as the destination where we want to get to:-

Our own Government under David Cameron, most recently, introduce the errors of not asserting that the EU Rules are built as per the above LHS: That is the map for the EU and it always has been. But equally Vote Leave introduce errors by making assertions that there is no need for a ROUTE or PLAN to get to our Destination!!

In fact, worse, Vote Leave say that the rules can be changed after we vote to Leave however we want which is like saying we can draw our own map of how to get from Guildford to Canterbury: All we need is a black marker pen to make a few minor alterations to the map (not to the physical reality!)! They really need to be clear:-

Posted by Red Cliffs Of Dawlish at 07:05