"The Glass Bead Game is "a kind of synthesis of human learning" in which themes, such as a musical phrase or a philosophical thought, are stated. As the Game progresses, associations between the themes become deeper and more varied. Although the Glass Bead Game is described lucidly, the rules and mechanics are not explained in detail."

So often it is the case that people talk or make a statement or a combination of such to make an argument about the EU Referendum, European Union or Brexit and they may make or use accurate descriptions or inaccurate and empty memes. They may indeed be able to explain these and hence they may even argue in a lucid manner.

But if you want a metaphor which describes THEIR BEHAVIOUR as opposed to taking at face value their WORDS, then you can use the example or metaphor of The Glass Bead Game whereby the total structure of what is said is divorced from a connection to the researched and hence inferred reality of the subjects above of Referendum, European Union and Brexit.

Namely the argument is detached and takes on it's own rules detached from feedback from research from real life!

Most people play this "game" when they talk about politics without realizing it: Indeed they play it because this is what the politicians and the journalists play over and over and over in their communication to the extent it replaces "the real thing" by and large. They don't realize that their descriptions are the glass beads, that their explanations are the advancement of their beads according to the rules they think the game is played by which advances the arguments in some way. And yet what they don't realize is that these "beads" or arguments or as I've called them before are often empty memes or if not they merely tools in the hands of the politicians before they introduce the next seemingly random rule that can never be fully explained, only described as our Glass Bead Game is related above.

Before giving an example let's look at Delusion:-
The Glass Bead Game as we call it for now, is characterized by the above delusional properties. A statement can be made with "absolute conviction" even if it's a lie or else an opinion but presented as authorative information. Incorrigibility is taken as a given, that others will never admit they are wrong or mistaken and hence any argument cannot "win" despite this format being the type that is repeated on television endlessly: The sparring opponents of "biff-bam" politics. And finally nothing can be falsified: Facts depend on how you interpret them.

Here we see the conditions of the Glass Bead Game where the explanations are never clear and indeed what we have is a mixture of descriptions of delusion combined with the absence of rules or arbitrary rules of the media conduit. What is noticeable is that so many people want to contribute their opinion but end up adding yet another new glass bead to this game.

But like the game of the story, it is a rarefied activity increasingly so, it is merely a kind of national emotional soup to which people through in their ideas and hence what becomes increasingly the case: Politicians subvert the rules of politics increasingly so to gain an advantage amongst themselves and indeed use the Glass Bead Game to obfuscate and exclude people contributing arguments: What they say is if it is common sense or not is immediately converted into this bizarre game that means absolutely nothing beyond appearances or propaganda, persuasion, spin and where it inevitably leads: Newspeak.

Let's reconstruct some of the last few moves in this Glass Bead Game during this EU Referendum and it might help us Perceive The Game for what it is and hence it might allow us to learn what is a fabrication of misinformation which interacting with our emotions becomes delusional that then feeds into the game more delusional "selective rules" and what might otherwise be progressive problem solving:-

Vote Leave/Establishment (Red is Blue Glass Beads):-
UK Government/Establishment (Blue is Red is Yellow is Green etc Glass Beads):-
What's so interesting is the likes of some who take this game to be some form of superior and sophisticated exercise of human organization! The pundits pontificate on this sagely and utter their deliverances gravely! They don't have a fucking clue about the rules and that's the point: They gain their positions by appearing to be able to "divine" them more closely than people can!!

Here's a little conclusion: This activity is not the zenith at all, it's a barrier.

When there is block or barrier to innovation and invention and hence creativity which is the source of so much of our potential prosperity then it can be inferred that such a society if not progressing, may be closer towards declining? See our debt and deficit problems. See and observe the problems in the Eurozone.

The Political Delusional Activity that is so easy to observe in this Referendum Exhibition Glass Bead Game Match is the major result here. The problem with politics is that much of it cannot be perceived directly by people, and hence these layers and layers of obfuscation and Ivory Tower Selective forces lead to the observations described above:- 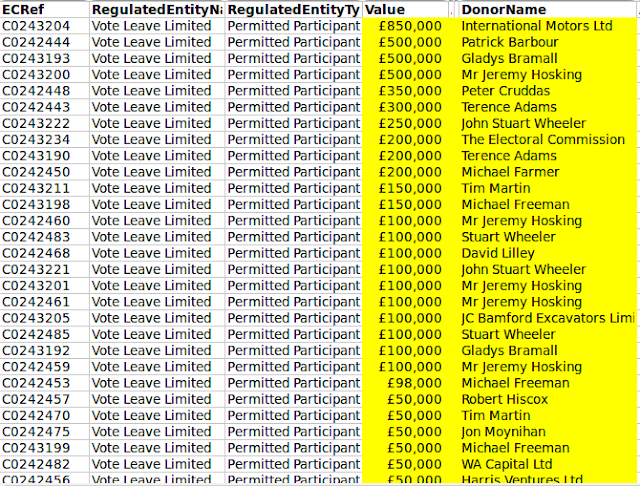 Posted by Red Cliffs Of Dawlish at 03:41