Beyond 2020: The Sweet Spring of Real Democracy! 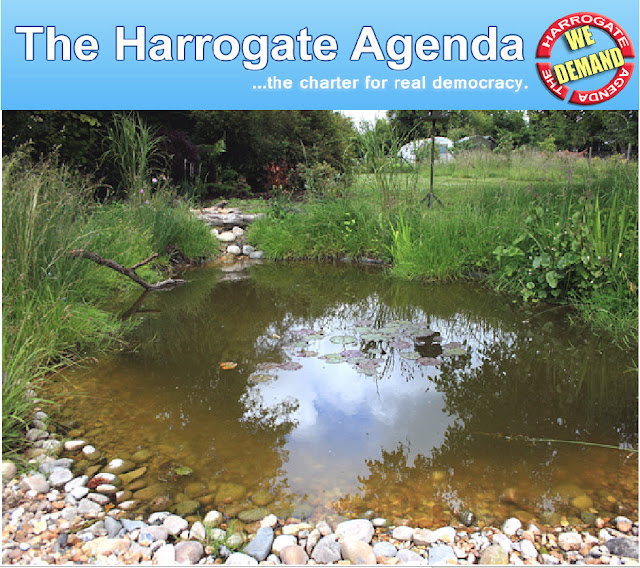 Building a Wildlife Pond: "The Sweet Spring Of Water For Wildlife."

After the Referendum, I've already made plans to build a Wildlife Pond. There's plenty of advice and instructions from which to learn and take inspiration from, online such as this excellent one from The Rural Gardener: "How To Build Your Own Wildlife Pond 1" and indeed extending the concept to add a "How To Build Your Own Wildlife Pond 2 - Adding A Stream". I've been doing various part-time work this Summer including some gardening and mowing lawns (so plenty of time outside in the Summer sun (and rain!)) and the above instructions and elsewhere and direct advice from people allow me to conclude that I know enough to be able to put that information into action and do this work (having earned enough cash to do so (hopefully no more than £150)!). From my mentioned experiences, I can't help but notice how people seem obsessed with having finely cut lawns; afterall I get paid to mow them every two weeks, particularly at this time of year when the grass can grow into majestic "Savannahs" of the British Isles, if left uncut!

It got me thinking, it may not be for everyone, but if all these gardens (big ones particularly) created some garden ponds with surrounding "wetland edges" and again surrounding "mini savannah edges" that then connected eventually towards the hedges and/or trees at the edge of the gardens, the calculation in increase in wildlife that this might lead to compared to the by comparison "green deserts" of finely mowed lawns with their various versions of ornamental-only (low biodiversity) "topiary" (the yellow meadow ants don't seem to mind the lawns so much)?? I appreciate mown lawns have other utilities but a portion of a garden given over to Wildlife (especially the larger or lesser used gardens and ponds are a hazard for young children), but the "appearance" of nature/green managed by people vs the "information value" contained in biodiverse wildlife gardens always strikes me as incredibly disparate: The former to me is "empty" and so many suburban districts have a kind of dead energy to them, whereas the latter is "alive" or "vital".

I can't help but conclude people seem very oblivious to the land they live in; perhaps less so to the house prices, however (and doubly so to their rise and fall)? Mown lawns are part of the assets that need the occasional management incurred cost and the nature of grass is to keep on top of it, I suppose, so the equipment does not break and incur extra costs such as petrol and spare parts etc. But the question to ask: The bit of land in peoples' temporary possession, how do they conceive it to be and how about after they leave it?

So I intend to create one and then calculate the biodiversity and maybe systematize this information some more if possible but also so that I can enjoy the richness in wildlife that this will bring. As The Rural Gardener says above, "Nature does the rest" or "finds a way".

So goodbye EU, Brexit and Referendum... and to be honest: Good riddance!


1975:Labour's Peter Shore on Project Fear - "The message that comes out is fear, fear, fear"

There's plenty of evidence that the 1975 Referendum was a horrible exercise in deception and industrial scaled propaganda against people and used similar FUD tactics to today. In 1994 the Norwegians experienced similar tactics:- 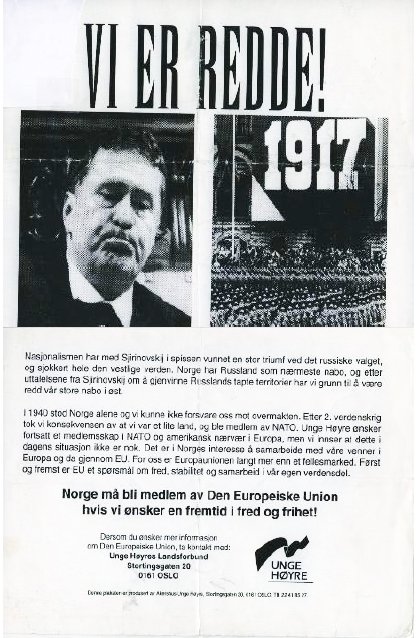 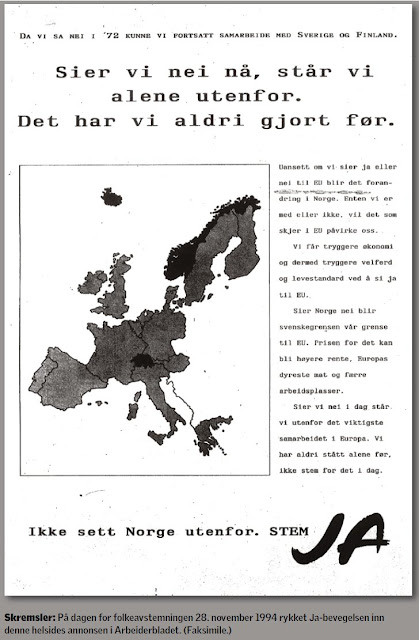 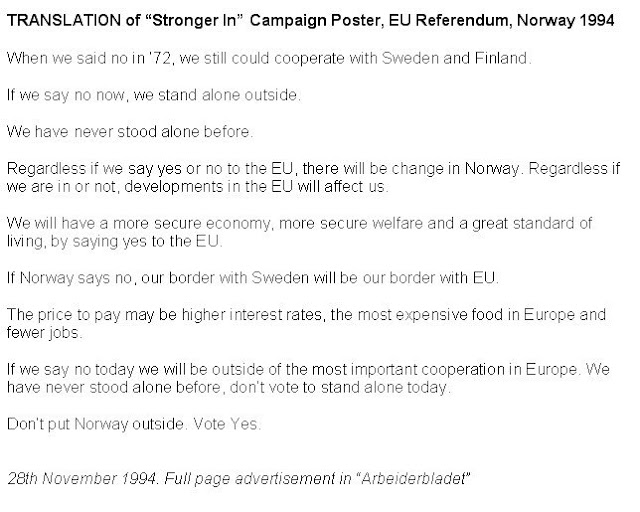 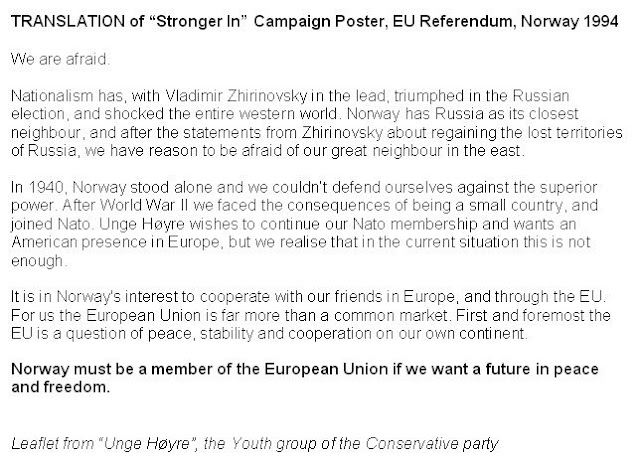 "Learn what it feels like to be used/duped by poliicians early": This stuff from Norway in 1994 is excellent material to educate children: First with the Yes Campaigns claims and "how true and good they appear", then hit them with this stuff from >20yrs ago saying similar things!

The fog of ignorance 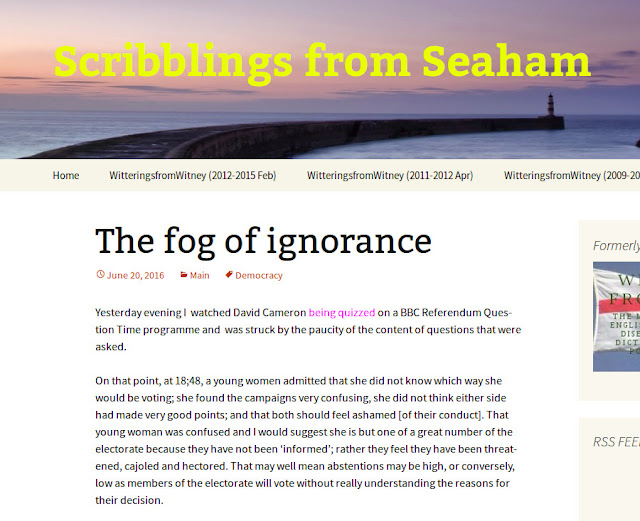 Scribblings From Seaham summarizes the ignorance today in the public very well above. As for today, 2016, it becomes tedious hearing David Cameron and George Osborne being allowed to lie by Vote Leave as such:-
Vote Leave allow these premises to dominate all other utterances which then lead to:-
Jesus Wept!

Of course even more deadly is that this allows incontrovertible "experts" & certified "good people" to wade in:-

Leave is then left with (lol!):-
The other big issue I have with this, is the problem people seem to have separating themselves and their direct relation to the EU with the universal perspective that is possible too.

For example, from my above "Wildlife Pond" project you can tell I'm very keen on wildlife, th environment and conservation. In fact these are areas that by and large I tend to agree quite a lot with the EU on!

One of the reasons is simple:-


EU Referendum: to be a sovereign power 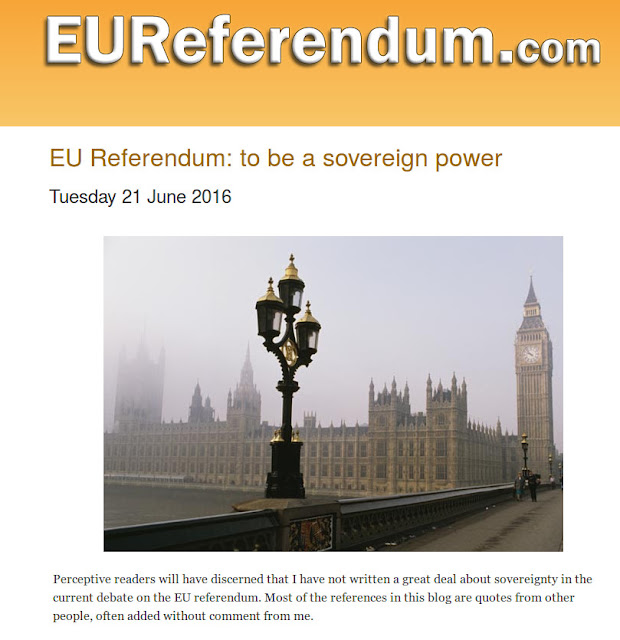 Is well worth a full read. I hazard to comment on the politics directly, but my own idea is that Sovereignty is to do with three elements:-
The land will be here when we've all passed through, hopefully for the new/next people. People need space to live (same with wildlife). How we all organize that space is via our common rules. I like to think Sovereignty is therefore effectively using rules of some sort in some way to make the land and people better today and tomorrow than they previously were ie for all to flourish at once? In the past we've had "Divine Rule" then we've had "Monarch Rule" and today we have so called "Parliamentary Sovereignty" where instead of by Holy Book or Crown, Politicians Discuss amongst themselves how the rules are made. Tomorrow if we build it I think we'll have "Real Democracy" which is the "spring of water" from which Sovereignty will be more highly distributed amongst people discussing rules more with each other according to their direct knowledge more applied to themselves and across the land (and our seas of course) in this part of the world.

The measure of success will be how well run the UK and British Isles are compared to other parts of the world, more likely less fortunate (and wise) than our selves in such a case? One of the results here will be less requirement for large groups of people for protection (from other such large groups) and smaller higher quality groups of people administering themselves more locally more responsibly and specifically and hence beneficially.

So irrespective, I think that the EU as an idea is outdated, though it has some things that may work but are certainly open to more political debate:

Particularly by the people who live and make a livelihood here and who lay claim to the benefit of their future generations too - which must include the consideration on how to look after the land and sea, also.

There's a lot of room for improvement here and indeed that does not mean throwing out what is already good such as the various international environmental regulations that the UK would need to continue to conform with and possibly participate with more directly out of the EU?

The final thing is that the current process of democracy itself seems full of flaws in politics and economics (the power of governments over peoples' money for example...). To come back to Sovereignty and quote Dr. RAE North:-

"And this is where The Harrogate Agenda comes in. The group that has been so careless of their powers, and so indifferent to the prospect of recovering them can hardly be trusted to safeguard them for all time, and not to repeat their give-away. Thus, it is we the people who must recover our sovereignty, wresting it from Parliament which has been so reluctant to use it on our behalf.

That is the back story. Parliament is sovereign, supposedly holding it trust for the people. But, in failing to exercise it, the people themselves must act, and demand the recovery of powers that Parliament has so carelessly given away. And then, with the horse firmly back in the stables, we must bolt the door.

We the people, on Thursday, must make a start in recovering our sovereignty – not from Brussels, but from Westminster. We the people are sovereign, and this week we have an opportunity to exercise it. And if we don't, we the people have only ourselves to blame."

I think people remain ignorant and hence feel "powerless" to the bunch of politicians in Westminster, only because they choose to remain oblivious to the potential and possibility surrounding them everywhere: The UK is a fortunate part of the world and very hospitable and "green and pleasant", it just takes a few "good ideas" and some work by a lot of people and lots of small positive changes can add up to a lot of positive change: Something politicians always promise and never deliver to people: They can't, but people probably could if they thought about it and decided they wanted to.
Posted by Red Cliffs Of Dawlish at 06:07