Referendum: Relief, Recovery; Some Humour and New Paths Ahead. 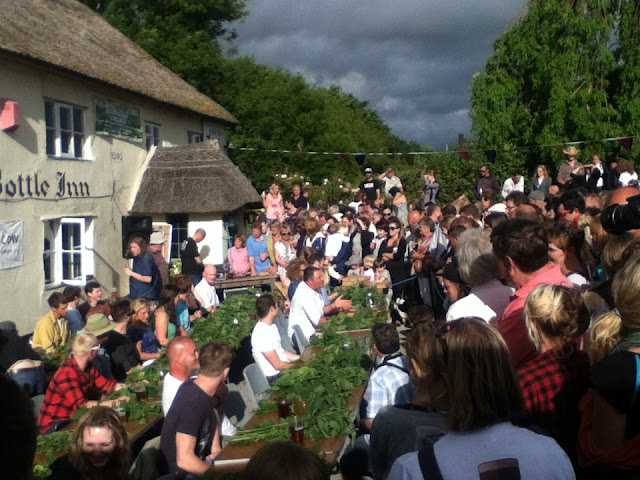 Great fun! And a lovely day out at such an unusual and idiosyncratic event.

The Bottle Inn, Marshwood, Dorset hosts "The World Eating Stinging Nettles" competition each year around the week-end of the 21st June (Midsummer). This occurred a few days before this Summer, and indeed the week before our Referendum. I had the chance to go along last year and took the above photo with a great deal of interest as you can see from the crowd in the sunshine with the Summer rainclouds in the background against the lush foliage of Midsummer. It was a great day out and lots of Real Ales on offer too as part of the festival.

The captivating spectacle is such as this borrowed from the mirror:- 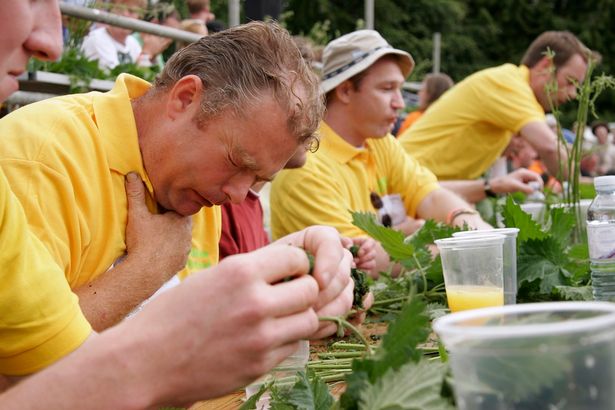 The leaves have to be eaten, washed down with a drink, I think, and the total number of stems eaten within a couple of hours if I remember correctly is how the results are drawn up for the winner!

Now imagine after the Referendum, many of the Remain voters (not all) will wake up with a bowl or dish of stinging nettles in front of them for breakfast and their reaction might be palpably similar to the above reaction!!!

Given enough time, and common sense and debate, it is more than likely that such distaste will dim for a lot of people as "nothing really changes" for the next so many years given it's a gradual and slow process to effect change practically in the politics anyway, firstly. Secondly with the realization that what counted as performance (campaigns) bears very little resemblance to what is now the result (Leave/Brexit advisory result) then again there will be opportunity for relief for a lot of people from the initial unpleasant reactions.

Finally recovery can only be fully realized when results are found to be positive in consequence as opposed to negative, confirming that a decision made was a "good one" afterall.

However, before then there will likely be a lot of people who make an emotional mistake: They have created a self-identity and stake in a particular position which no result will touch: in fact such a sense of defeat will likely lead to the situtation where:- 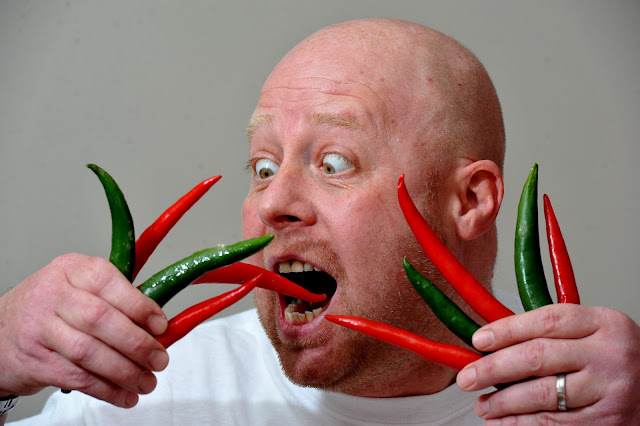 They will look for more confirmation bias to reinvigorate their previous position. Hence the Legacy News-Media, obligingly and politicians calculating for their own craven reasons, will seek to feed people such "chillies and nettles" to get them frothing full of rage and tears at such a feast!!!

I'm already seeing a lot of people attempting to "swallow bitter, hot and stinging" more news and attitudes such as:-
Hopefully you "get the picture". But more interesting than these stupid news stories is the demand for them: People actively seek them out and WANT to eat "bitter" and "scorching hot" and "stinging pain".
Personally, I admit, after a long day sitting at a computer, either typing or coding, I tend to feel a bit "zombie-numb" and either stimulus of exercise (ping-pong or fuzzball are great for this!) or a hot Indian Curry, really get my juices flowing again from perma-freeze! So I have to be even-handed in suggesting on a wider scale, people like their news this way (eg tabloids Daily Mail and Sun and Mirror) but when you asshat journalist sources as above masquerading as something "more serious" well all I can say is repeat my previous preference that I look forward to the day robots replace these "journalists".

On the other side of this "transaction": Why do people behave in such an irrational way? Partly it's emotional digestion and developing a taste for such things like eating junk food and drinking sugary fizzy drinks. I think however part of the recovery from a Referendum is in having a sense of humour about the whole decision-making process and avoiding the band-wagon opportunist politicians who want to stir people up, the better to control them for their own "Game Of Thrones" that's going on right now everywhere in Westminster:- 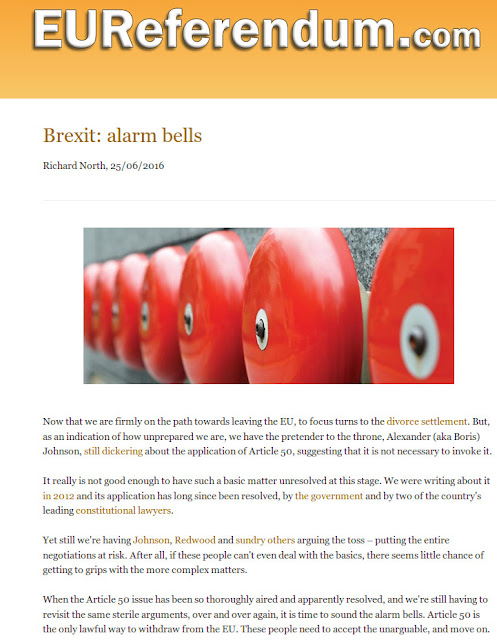 And then following, Dr. RAE North's subsequent blog:  the above up with a serious rerun on Article 50 (The Leave Alliance: Article 50 - An Explainer):-


"With David Cameron skulking in No 10, declining to face the challenge of dealing with the aftermath of the referendum, and Corbyn's opposition party crumbling before our very eyes, the nation is currently without an effective government or opposition.

The ruling Conservative Party has shattered into warring factions and no one group has sufficient support to be able to elect a leader outright, while the plotters continue to position Alexander (aka Boris) Johnson as leader-in-waiting.

Meanwhile, Sky News's Faisal Islam "reveals" that Vote Leave doesn't have an exit plan. Having spoken to a Tory MP from Vote Leave, he learns that the plan does not exist. Faisal quotes the anonymous MP as saying: "There is no plan. The leave campaign don't have a post-Brexit plan".

The apparent absence of any such plan is adding to the uncertainty but, in terms of the media narrative, this is undoubtedly deliberate. Faisal knows full well of the existence of Flexcit which has had well over 80,000 downloads and is approaching the 100K mark. Yet he – and even journalists who have previously mentioned it - are studiously ignoring its existence.

There is a certain wilful stubbornness about this, which defies rational expectation. Even MPs and others, anxious to block the ascendency of Mr Johnson, and who are thus determined to produce their own plans, are ignoring the material in front of them, preferring to reinvent the wheel, mostly in any shape but round.

We thus see all around us the beginnings of the debate that we should have been having before the referendum, but at so basic a level that issues we were discussing four or five years ago are now only just being aired."

What you have above is a demonstration of the opposite of feeding people chillis or stinging nettles to rouse them up! If you prefer some healthy debate and knowledge increase, the above is the first of it post-Referendum, but which was already being "served" as far back at least as 2012 and further back in some regards still.

Now, the important thing to realize between the two types of "information" is that all essential measure: TIME. I personally have not got time to be pissing around with the Legacy News-Media or our stupid big-gob politicians duplicities and survival strategies in their own enclosed and from the outside perverse ecosystem of advancement and personal power.

So much work was put into this subject by The Leave Alliance, and when I read The Sunday Telegraph newspaper "EU Special" on my commute to work yesterday, all I saw was one break-through article amid the sea of garbage: A sea of drama of politicians doing politics but without the politics and without the people!!! Look at this:-

One good article Roland Smith: We have the chance to forge a new Britain and Europe that we are all at ease with.

As per my previous blog, I have a minor problem even with this: It's tailored to the tastes of those with chilli addiction. It really needs some communication that is more "structured information" beyond the use of words mixing Aristotle's guide to political process: Logos, Pathos and Ethos.

For example coming back to Article 50:-

"On that basis, it is a given that it is not in any way politically or legally realistic to frame any exit strategy which does not conform fully to the provisions of international and treaty law. Strategies really need to be road-tested for compliance, before they are given a public airing.

For the likes of the odious Johnson, Gove and many others, therefore, I am addressing the general principles which strategists should keep in mind. These essentially amount to five points.

Firstly, the right of a Member State to leave the EU lies outside the EU Treaties. The Treaties neither confer the right to leave or impose any conditions which might affect the decision. As Article 50 of the Treaty of the European Union (TEU) itself states:


1. Any Member State may decide to withdraw from the Union in accordance with its own constitutional requirements.

Article 50, therefore, simply recognises the state of the art. This Article applies only after the decision to leave has been made.

Secondly, the procedural choices on leaving are then limited by international law. We are not allowed pick 'n' mix options, dipping into different treaties to come up with our own desired mix.

We are bound by the principle of lex specialis derogat legi general (special law repeals general law), which is regarded as a fundamental tenet of international law. In short, whenever two or more laws or treaty provisions deal with the same subject matter, priority goes to that which is more specific.

Where Article 50 makes specific provisions for withdrawal, these take precedence over more general provisions, as in the Vienna Convention on the Law of Treaties (VCLT). We do not have the choice of using one or the other. Our choices are determined by lex specialis.

Thirdly, and subject to my further comments, until the Article 50 procedure is complete, the UK remains bound by the provisions of the EU Treaties, with all the rights, responsibilities and obligations.

As parties to the Treaties, we are obliged under international law to conform with their provisions. This general obligation is conferred by virtue of Article 26 of the VCLT, under the universally recognised provision of pacta sunt servanda: "Every treaty in force is binding upon the parties to it and must be performed by them in good faith".

As one of the major guarantors of the writ of international law, it is inconceivable that Her Majesty's Government could countenance a breach of pacta sunt servanda. The international ramifications would be profound, with implications far beyond just relations with the Union and its member states. It would gravely weaken the international standing of the United Kingdom.

Therefore, inasmuch as we are obliged to resort to Article 50 by virtue of lex specialis, the principle of pacta sunt servanda obliges us to comply with its provisions."

This groundwork is incredibly important, as it structures the start of subsequent possible solutions as well as sharpening up hence what is communicated to people as to what is possible and what is not by direct reference to the rules we are all agreeing to live by with each other!

So much time was spent by The Leave Alliance, in particular Pete North attempting to "keep in check" the multiple sources of error conflation from both UKIP (Complete Bastard, the hero we all deserve!) and Legacy News-Media and Politicians (Pete North's Politics Blog).

So much wasteful energy & time spent. And in fact if you are a Remain advocate still still disappointed with the EU Referendum: Think on this: We can cut out a large area of wasteful activity bickering about what something means (to whom and by whom????), and get on with the job (to borrow Cameron's favourite phrase) of actually doing something directly for the UK by the UK!! And besides, here's a wise head with perhaps a more useful and enjoyable meal of news for you:- 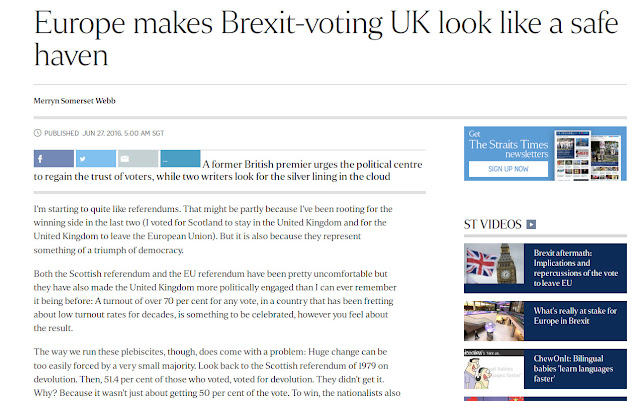 As for me, back blogging already, but different paths and directions await; I don't want to have to keep commenting on commentators who should "know better"... there's some really interesting stuff regarding the next 10yrs that I want to sink my teeth into next given we have this golden opportunity ahead of us now (~14mins in) and ahead of time, too:- 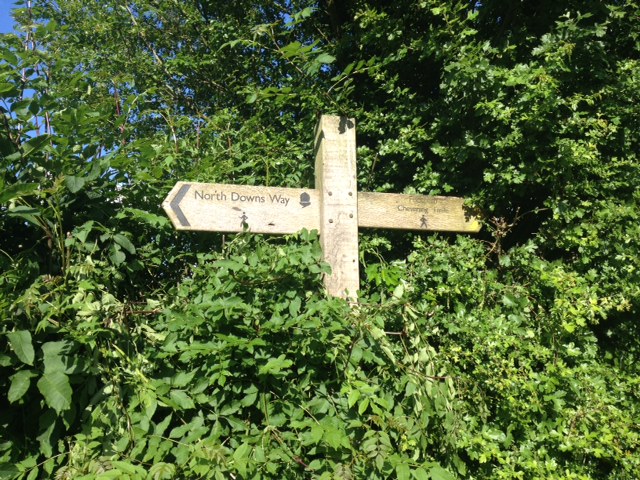 Posted by Red Cliffs Of Dawlish at 07:01