The Remain Argument: A Hollow Relationship Built From Empty Promises

At some point in time, too many empty promises that don't materialize or else "run out long ago" by spending "the stored good will" in others results in a requirement to change the relationship.


I think perhaps the above manages to symbolize, or capture or encapsulate all that the EU has become, perhaps regrettably and sadly?

If you are a Remain advocate, I've tried to above capture some sentiments of a Leave advocate, the general "gut-feeling" that no amount more of rhetoric will do to "persuade" to change minds and vote Remain. The accumulation of the above into an overall feeling that "It's done" and "It's time to move on and break with this stale and empty relationship". All these reactions are how people deal with when a relationship feels as if it's not working and is dragging on too long, with too much negative consequence.

For almost all of the past two years, I'd argue as reasonably as I can, using the materials I've found most rigorous on both sides of the argument, mostly in fact from the affiliated sites on this blog such as: The Great Deception (WHAT?), The Harrogate Agenda (WHY?) and FLEXCIT: The Market Solution (HOW?). The basics of grasping a basic understanding via such questions on such a wide range of subjects within politics.

However, recently I noticed some appalling coverage in the news involving various acts of "terrorism". Here there is I think a combination of two ways of understanding the forces driving the question over our status as "A Member Of The EU":-
I think in general the great problem with the idea of the EU is that it's effectively taken away control over the peoples' ability choose their identity and hence feel secure in their relationship: The most notable and visible example of this has been the great debate over immigration (Migration) as well as it's connection to the spread of terrorism or else other "atrocities" in Europe by people who are ruled by other ideas of identity that are not compatible and should have been filtered out more effectively.

I'm not making a new argument for myself here. But am pointing out that for many many people who don't know the arguments to a high degree, it is I think very understandable if they choose this form of argument and decide they "get control" back more if they vote Leave on this sense of identity and relationship with stronger controls or security over Migration Policy. Not only this, but the government does not talk "straight" to people: They code everything they say in political language which is frankly weird and hence likely unreliable. Given a direct vote to "tell" them how to behave/act, the choice is obvious. The threat of economic disaster is possibly an "empty on" or bluff: The government already suffers from economic failure not by it's own choosing and would point to economic success as by it's own hand for winning the votes.

This takes us to Remain arguments: What are they?

They are the same form on identity and relationship:-
On The Argument itself:-
It's fascinating reading the "Remain" case. I don't believe it makes any difference to the Leave advocates concerned about Immigration: So many words and so little direct contact. What it does suggest is that these arguments are about Relationship and Identity also. But that they have put the ideas of these things BEFORE the arguments themselves and hence understanding why such "promises of building better worlds" don't turn out quite as expected or promised.

Perhaps the most dangerous Remain position is to characterize the EU as THE ONLY RELATIONSHIP that is possible and good. And by doing so preventing the temptation to vote for Brexit for a different relationship? This failure either because the EU is reality or else because any alternative cannot be reality (too dangerous!) is suggestive of a hollow relationship:-


Leinen: Shock of Brexit would draw EU closer together 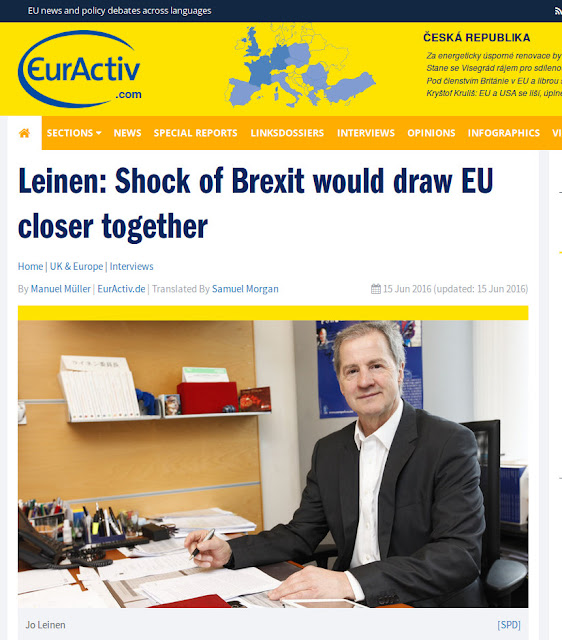 So how should the EU deal with the UK itself? Many so-called Brexiteers have advocated leaving, but maintaining access to the single market. But German Finance Minister Wolfgang Schäuble (CDU) said just a few days ago that he is not in favour of such an arrangement and that the UK is either in or out.

There can’t be special treatment for the UK. Brexit would be a huge cost to the country; the British would have to pay to leave the EU. But, of course, we would still need to continue our relationship with the UK, which is our neighbour and a country that has been in the EU for some four decades now. What status does the UK want and what would the remaining 27 be likely to confer on it? At the end of the day, the decision to leave will have to be accepted by the other member states and the European Parliament. It’s still unclear how that would actually play out.

The best case scenario for them probably is the Norwegian model: the UK would continue to enjoy access to the single market through membership of the European Economic Area, but would still have to pay for that privilege, as Norway does. But with this, the UK also takes on the same rules, like the principle of freedom of movement. That would probably be the main stumbling block in the negotiations.

If Arguments had been promoted more thoroughly and fairly, more people would have ended up less confused than they already exhibit. That is to say, the result always was going to be about RELATIONSHIP continuing either way and if people had learn the actual arguments instead of willing the results to come first such as clinging to safety of relationships known (EU) irrespective of it's quality, and secondly more Vote Leave morons had understood this too about a staged withdrawal such as EFTA/EEA aka "The Norway Option", then this Referendum might have had to deal with far less emotional digestion and concentrated on more mature democratic participation in action - a positive result either result: Remain or Leave.

The fact Remain denied there was a future alternative relationship possible, is potentially the most useful error of that argument's proponents. Any relationship suggesting such is no real relationship to build the future upon, I would argue?

An example of the childish confabulation of Remain Arguments is this article Which would you rather, President Trump or Brexit? It’s no contestJonathan Freedland which shows so clearly how the childish conception of taking elements that it wants and elements that it can see and concocting a mixed up communication of an event to the adult patiently listening (sometimes with amusement!):-

"Words Will Work If We Will A Better World Enough." ~ Remain in the EU
I don't agree at all no matter how much propaganda is used.
Posted by Red Cliffs Of Dawlish at 05:32