To Answer or To Question? The Ultimate Primacy of This Referendum The First Question People Often Ask: "So which way will you vote? In or Out?"


One of the things I've noticed when talking to people is that they often FIRST ask the question of which answer the other person has already decided to choose on how to vote in the Referendum on Thursday, 23rd June, 2016.

Now I wonder why they do this, because once someone gives their answer, it's either the same answer and hence does not give any new information or else it's the "wrong" answer and the two will likely work against each others' answers for reasons that will most likely appear at cross-purposes and subjectively so.

First before suggesting, an much better approach to talking about this Referendum, I think this approach taken by people is partly economy of discussion: A simple Y/N Question and Answer provides a flow to conversation without falling into a political swamp from which both people probably prefer only to dip their toes in. I notice also that people hold reasons for voting that are not really reasons but gut-feelings and emotional and therefore very much more often "inexplicable" even by the person who holds them.

The other reason, apart from the pitfalls of communication, is misconception:- 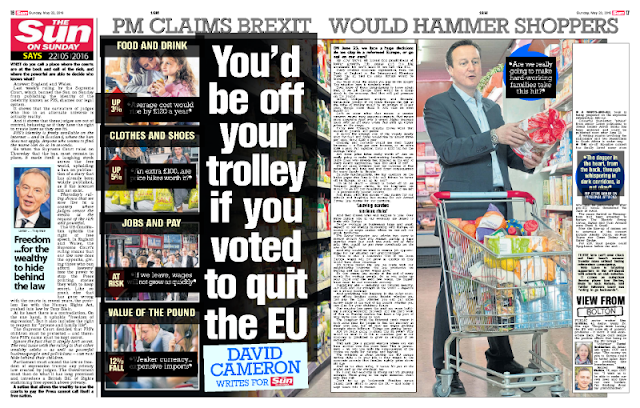 Why is the Referendum Question treated as "Shopping Trip" with each answer's value (REMAIN/LEAVE) dependent on "filling your trolley with more for less - than the other trolley"?

My guess is that this puts the person/voter directly in between the two questions and thereby they decide individually across the UK what is of value to them and hence how they will choose to vote.

My argument is this: IF that description is more or less correct, then I think it explains so much of how the main campaigns fail to be in the words of so many prescient commentators: "Edifying". And indeed I'd argue the number one criticism by people is that "We don't know enough to vote", even though this is supposedly a democracy and that's supposedly the best thing demonstrating how "civilized we all are today".

It also explains why underlying, people shoot straight to the answer and then try to fit the "workings" as they prefer like picking various items off a shelf to fit the trolley they've already chosen. In my opinion the above shows that the most useful bit of information in the answer is the in the workings which identifies: "Angles on a straight line adds up to 180 degrees". FROM this, the calculation and final answer in digits makes sense.

Now the problem is still apparent. Irrespective if you follow the line of reasoning here, how can you actually persuade people to instead of inserting themselves into the middle of the argument and being driven by conviction or in other words "belief" PASSIONATELY (that excessively over-used word to condone conviction and hence societal signalling of sanctioned political behaviour); how can you persuade people instead to learn WHAT? the argument actually is, to describe it, then explain it via context and finally allow people to put arguments forwards based not on what they think will be "good for me/us" but what will actually lead/yield USEFUL RESULTS to our society?!!

In fact there's fewer better examples of demonstrating this conceptual change than listening here to Regulations on BBC4 More or Less. In the blog EU Referendum: dealing with regulation Dr. RAE North points out the "Shopping Trolley" mentality or conception used by Vote Leave in this EU Referendum, which I'm suggesting is making the same mistake of General Elections which become about supporting a tribe (the bigger the tribe the better or "more right"...):-

...and less to do with actual subjects themselves; is inevitably going to turn out to not be "items on the shelf you the voter can "pick and choose" at your heart's fancy's whim! And that is exactly why people feel cynical about politicians and why politicians behave cynically towards people:- 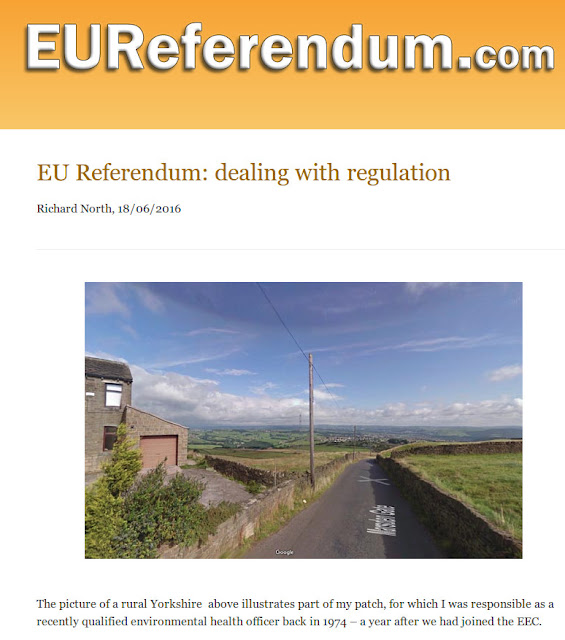 "Now this is precisely the sort of "red tape" that must be removed from the statute book if Vote Leave is to meet its target of saving billions from scrapping all these burdensome "regulations", one of its claimed advantages of leaving the EU.

For this, however, the idle children of Vote Leave rely on a facile piece of work conducted by Open Europe in which it is asserted that the "top 100 EU rules" cost the nation £33.3 billion a year. Interestingly, the Environmental Protection Act is not even mentioned in this work, even though it is the fount of much subsidiary and costly legislation.

Its premise, though, that this £33.3 billion represents an annual cost which can be saved by leaving the EU – as espoused by Vote Leave – is something I describe technically in the BBC Radio 4 programme More or Less as "bollocks".

In the first instance, much of the regulation to which Open Europe refers is of global or regional origin, which we would still have to implement outside the EU. Much of the rest replaces national law that we would have to be implemented anyway, with the EU simply updating it. Sometimes, this has been at the behest of Member States, such as the food hygiene regulations, where the latest round of changes was initiated by the UK.

Of the balance, much of this is commercially orientated, and most businesses would adopt it anyway – the so-called Brussels effect. They need the certainty and predictability that regulation brings to the business environment. Overall, therefore, there are virtually no savings to be gained in the short- to medium-term.

When they first made it in October 2013, we took the Open Europe claim apart. Then Business for Britain made the same errors in 2015 and we took their claims apart as well. Then we saw the Treasury Committee trash the figure.

But such subtleties as facts have never troubled Vote Leave. They ignore such minor details in favour of their propaganda, relying entirely the Open Europe work as their source. As to a more nuanced look at regulation, Vote Leave isn't on this planet." 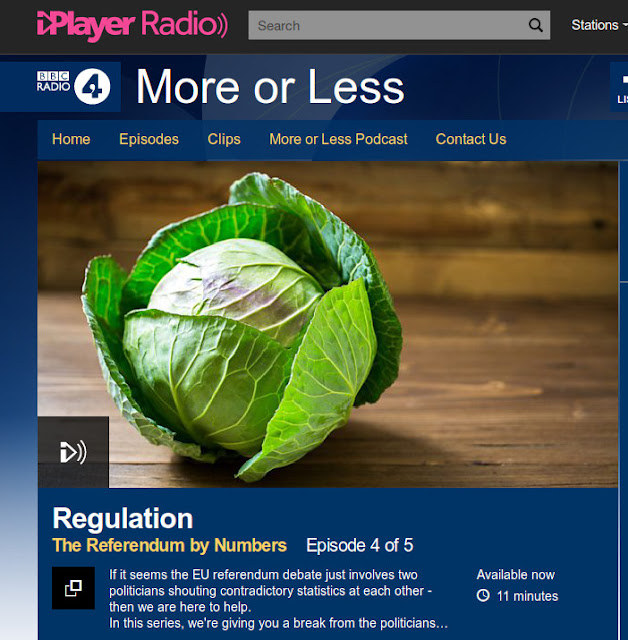 Regulations & Standards - More Than Meets The Eye: A source of "Central Planning" or the revolution in technical "data-driven" systems with which standards can be harmonized and improved?

So if you decide to listen to the BBC Radio 4 podcast "More Or Less" on the EU Referendum and wonder how the curious and humble "Cabbage Regulations" can amount to a staggering "26,911 words" and the populism of "Bonfire of Cutting Redtape"; just consider that the portrayal of the Shopping Trolley or Pro vs Con Choice may be very very misleading and a source of negative politics.

An example in the above is the argument concerning that "The Norway Option":-

Vote To Leave: "WHAT RELATIONSHIP WITH THE EU AFTERWARDS":-

Here you go, "negative politics" that sounds so attractive or as per Dr. RAE North: "Bollocks!"

I first came across this alluring Top 100 Costly EU Regulations via What the EU Costs the British taxpayer and you can see it also at Open Europe: Top 100 EU rules cost Britain £33.3bn where you can see that back in 2015 Open Europe was trying to "Kill Off" The Norway Option for Brexiteers:-


"In the latest installment of Open Europe's ongoing Brexit series, we look at the burden of EU regulation on the UK economy, and whether swapping full EU membership for EEA membership, i.e. the 'Norway Option', would be a better way to cut regulatory costs." Pawel Swidlicki  Open Europe16 March 2015


You see this argument of a Shopping Trolley is a trap for Brexiteers attempting to snare people. And indeed the former Open Europe Matts Pearson started working for David Cameron in the Remain working group in anycase. Almost as obvious as The Tufton Street" gang of Vote Leave...

In the previous blog we looked at the "starting conditions" for any Leave vote and the practical tests they would experience being extremely "selected". Dr. RAE North points out that concerning the acquis and legislation on Leaving:-


"On top of all that, we cannot under any circumstances risk throwing the babies out with the bathwater. In many major legislative instruments, we see confection of international, European Union and national requirements, so intertwined that it is sometimes impossible to tell which is which. Some of it is good, and we will want to keep it. Only the bad needs to be removed.

Thus, the option presented in Flexcit is the repatriation of the entire EU acquis – as it applies to the UK – and a measured review over time. We also recall that this was the option adopted by the Indian government on independence in 1948. But it was not until 1956 before it appointed a review commission to start the work of weeding out unwanted legislation.

We can hardly see the UK acting much faster – or at all. Now, there are different ways of doing things, especially with the onset of globalisation.

The great benefit of leaving the EU is that we regain control at the true European level (with UNECE) and in the many global bodies of which we are members. Not only do we regain our votes, though, we also regain the right of initiative. We can propose new measures at global level and, by fostering alliances, change the global perspective.

Over time, this will have the effect of re-shaping not just the national but the global rule books – exploiting the WTO Agreement on TBTs -  to the benefit of the entire world trading system. That is far more credible a vision than the obsessive, negative focus of the official "leave" campaign. And in the final analysis, most savings will come from better and more effective regulation."


If you look at the two ways of viewing the EU Referendum Question: The Answer and The Workings as it were (in my flow decision-tree diagram), I think instead of asking or answering "How Will You Vote: In Or Out?" I think it's much more productive for people to hold such a document and point out that the workings on either side of the question suggest the nature of the answer:-

In the above, I've even got the relevant sources confirming each option. Therefore we arrive at two answers:-

Posted by Red Cliffs Of Dawlish at 05:45