Political Barriers To Entry: An Image Of Power; A Course To Ruin

The above is a scene from the comedy movie Trading Placing starring Eddie Murphy and Dan Ackroyd who both effectively experience "role reversals" in the other direction to the other. This scene is particularly poignant: The test of "social acceptability" by Eddie Murphy contrasted to the "deadbeat" Dan Ackroyd finally hitting his nadir on witnessing from the "excluded outside" in the driving rain and dark, looking in on the glitz, glamour and social upper-crust of society; separated by a pane of glass but for all the world, literally, now living in another world, remote and so far removed.

I think a large part of the fabric of modern politics that is distributed for consumption via our mass media, is not for it's content quality; it's information value and hence increasing public understanding, it seems to me it serves as much if not more so as a constant reminder (or reinforcement ie repetition) to people to "know their place": Namely any such exchange is both an informational and a social exchange. But in bulk I believe that the social exchange comes to dominate the actual information exchange: That which is socially expected and reinforced by these images, conversation and the like, becomes the overriding and lasting image or impression left on peoples' mentality of "what is politics and who is it done by?" For most people:-
There is an inherent assumption that those who take up our air-time or are invited to share their views in the lime-light in front of the broadcasting cameras, have somehow earned such an eminent position. Their achievements are the currency with which they deserve our notice or they are rewarded with others taking notice of them. I've long found it curious that actors often are called upon to take up the cause of "climate change", "world peace", "feminism", "palestine" and all the other idols that were pointed out so long ago by Francis Bacon in how people form bias in their thinking. Phony speakers promoting fake ideas. Why fake? I think there's a reason: One Big Idea is far more effective in drawing attraction from people than a series of interconnected and complex associations that more accurately reflects what we would suggest through scientific method is "objective reality" via independent, repeatable measurement that develop a current (but changeable) theory. When this process is "short-circuited" via such presentational problems as propounding "One Big Idea" we end up with something else too: Orthodoxy. In our politics today, such a process has been delivered.

This introduction is a little longer than anticipated. But let's now look at a particular example of a "Big Idea": The European Union (EU). First, let's reform this idea of "Barriers To Entry" one more time:-

In another movie such a symbolic barrier to entry is that of the "The Holy Grail" in the movie Excalibur:- 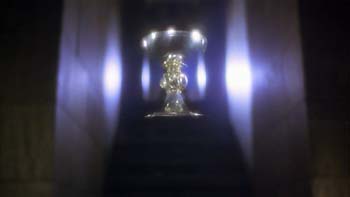 What is the secret of the Holy Grail?

I've wondered about how best to answer the question of our membership of the EU. How best? Given any number of different scenarios and people and numbers of people? If we look at the EU today, we probably all agree it's beset by troubles that appear unfathomable. An indication of such thinking is the recent Treasury Report EU referendum: HM Treasury analysis key facts. Here we see a symbol of power; like an image that we can see but we cannot comprehend. In fact this is an image, a repetition but magnified to a much larger degree of so much of our modern politics to "remind people" of their "outside/underneath" positions in our society. The above image of the "Holy Grail" I feel replicates this sensation or experience. I think for many many people the mere appearance of this image is enough to switch them off and supplicate helplessly and believe that "politics is a closed shop to them".

But equally today, anyone who genuinely is a seeker after knowledge can "quest" for such information on the internet: Sure it's hardwork but if you can remove your own personal bias and see things for what they are not for what they appear to be:- 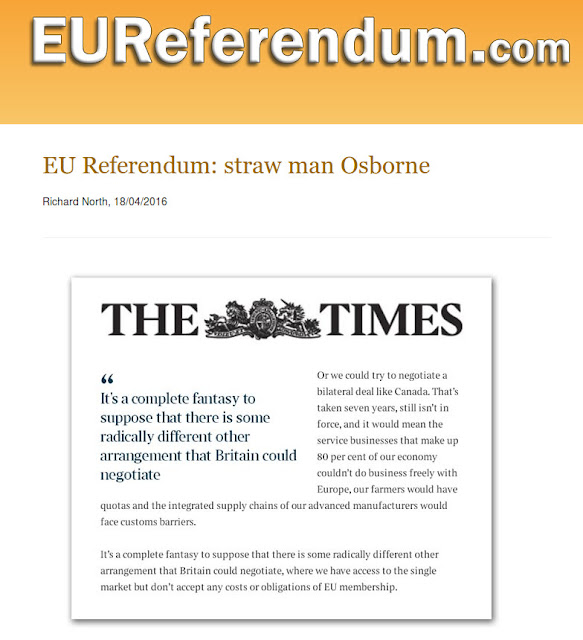 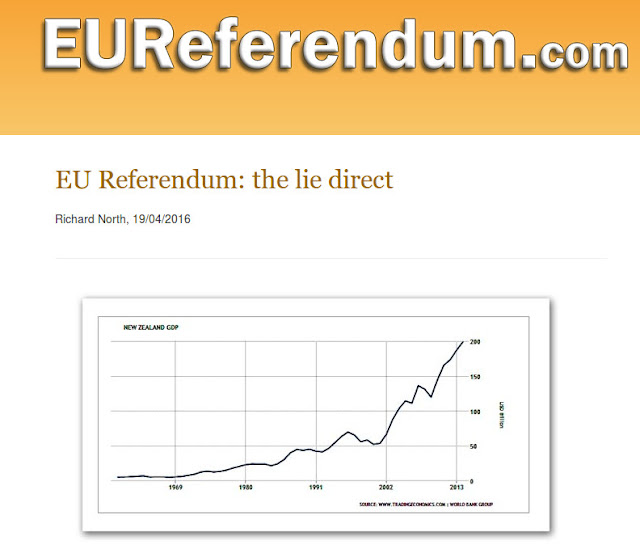 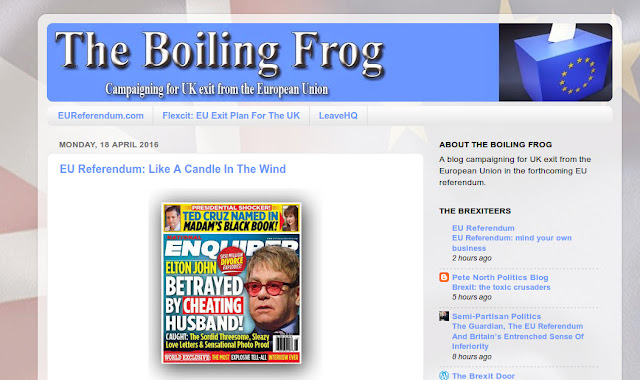 A mess of pottage 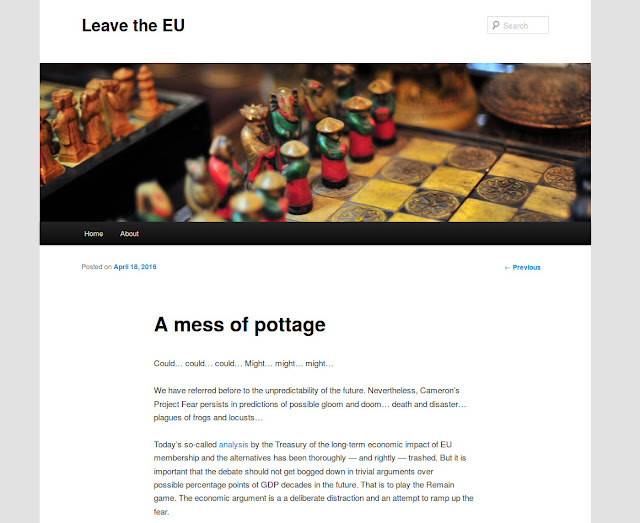 Missing the point about trade as an EU member state 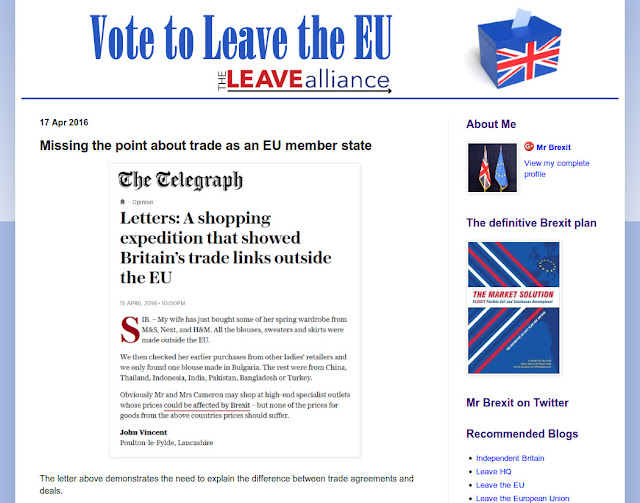 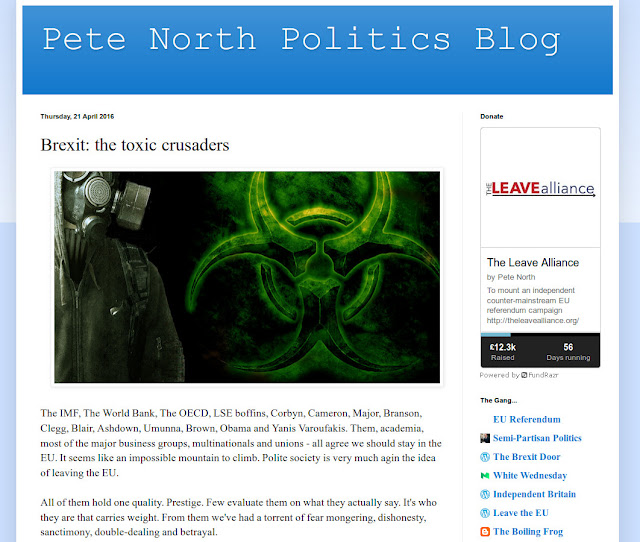 Osborne wheels out the big gun 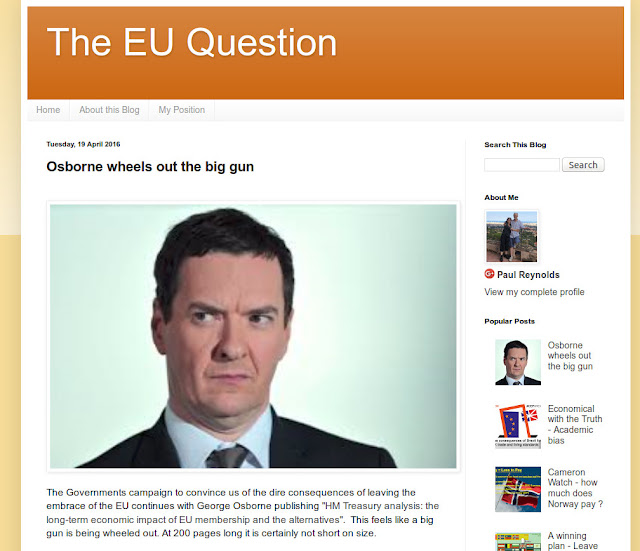 The Consequences Of Brexit 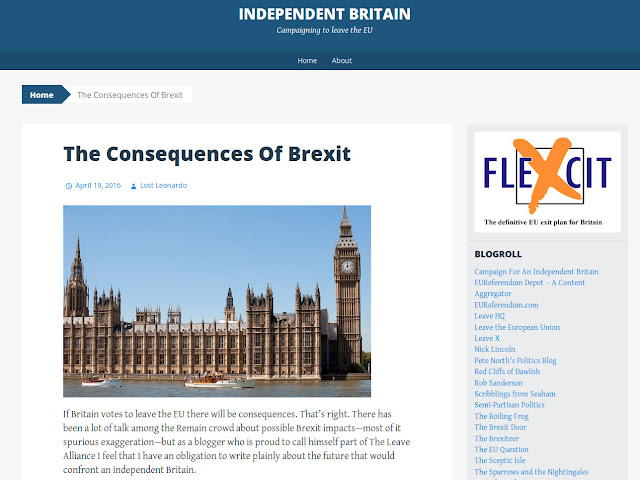 I think the measures undertaken by The Treasury; the actions or intentions or indeed the underlying motivations behind such actions and hence intentions is far more revealing than the detail of the "story being told" / "song being sung" here:- 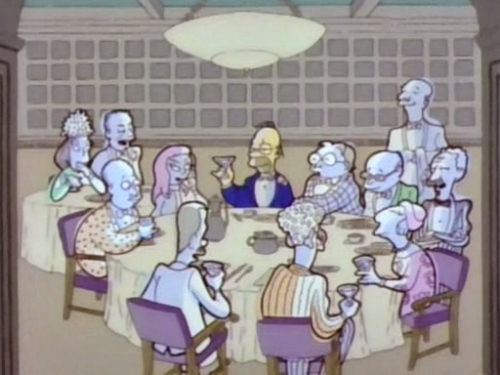 Social Acceptability: "So I said I must get out of these wet clothes and into a dry martini!" ("ahahahahahahahaa... !")

You only have to read Dr. RAE North's analysis in the above two blogs to determine the inherent actual value of such work done by the Treasury under George Osborne. But what we're really witnessing is again a gathering as pictured above: A purely social control convention being played in front of our eyes and into our ears.

This is "remark-able", but no more so than the "un-remark-able" that it represents due to it's high frequency repetition, and again repeated by Vote Leave in the form of Dominic Cummings, once again ably and incredibly usefully provisioned for view by Dr. RAE North:-


EU Referendum: no grip on reality 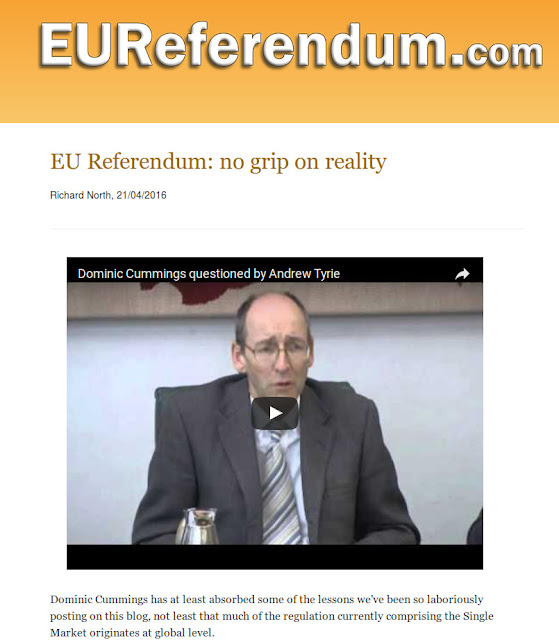 Or from Dominic Gove; also from Vote Leave:- 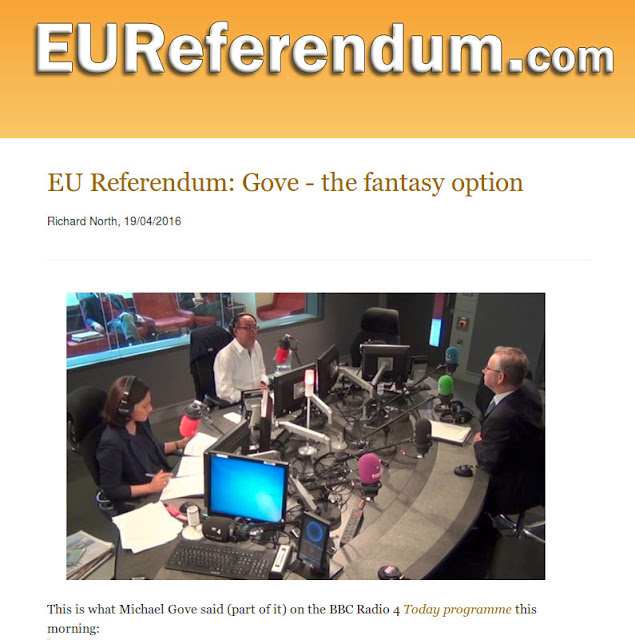 I might actually be impressed if all these people were working on a system whereby the best way to gradually educate people is to use the most flawed arguments so that people can then learn the mistakes and hence by these means put the pieces together as a coherent picture emerges... such is the scale of "insanity" presented:-

"Insanity. n. mental illness of such a severe nature that a person cannot distinguish fantasy from reality, cannot conduct her/his affairs due to psychosis, or is subject to uncontrollable impulsive behaviour.

Insanity is a concept discussed in court to help distinguish guilt from innocence. It's informed by mental health professionals, but the term today is primarily legal, not psychological."

What is this fantasy? I suspect it's based upon "mixed-motivations": Attempting to win votes is itself a kind of divorced reality of politics from the facts themselves: Indeed we're right back where we started: Big Ideas and the problems of presentation that themselves lead to "other problems". Effectively in older language: "Temptation" or indeed other words within that, now, archaic territory.

My suggestion is that the politicians are the root cause of the problems visited on the UK and other European Nations.

This is something Scribblings From Seaham remarks upon:- 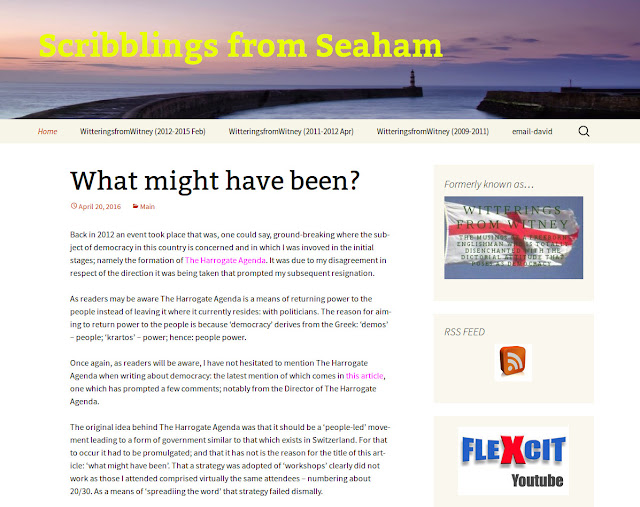 And there's 2 further examples that I think demonstrate this experience very adroitly that we can all observe and agree on what we're actually observing:-


EU Referendum: mind your own business 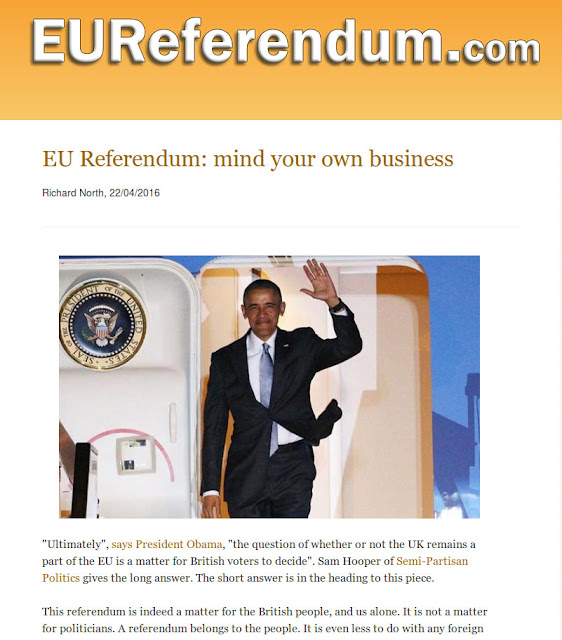 It's worth quoting some sections here:-

"This referendum is indeed a matter for the British people, and us alone. It is not a matter for politicians. A referendum belongs to the people. It is even less to do with any foreign politicians. Be they ever so mighty, they have no business seeking to interfere in the internal politics of our nation, and especially in our choice as to how we are governed.

Mr Obama nevertheless claims to be our "friend" but, for all his fine words, not once does he address that central issue. This referendum it is about how we, as a people, are governed. His proud nation went to war with us, the British, over precisely that issue, throwing off the yoke of the King and exercising their right to self-determination.

Obama is welcome to meet our politicians. But it is ironic that he should also come here to have dinner with our Queen - this the representative of the monarchy which his own people have rejected. And yet, as he dines in style, he bears a message to our people that we should accept a form of government that free Americans would reject. They would doubtless burn down the White House a second time if he attempted to foist it on them.

The President should, therefore, shut up. When he's had his dinner with our Monarch, he should get back in his aeroplane and go home. He's not wanted here." 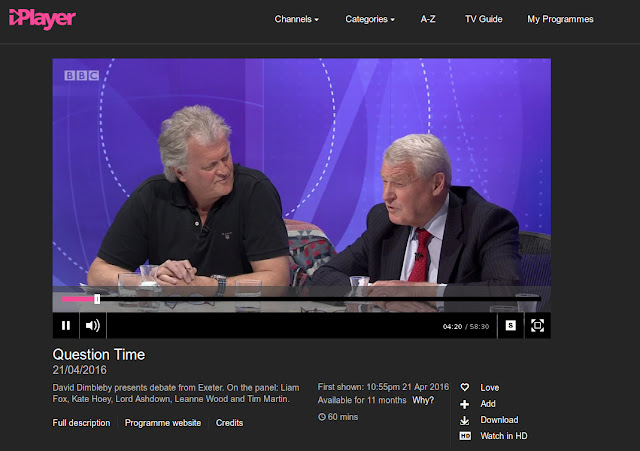 What I found fascinating about the above, was the contrast between when someone advocates for "Democracy for people" compared directly to when someone from "Prestige & Authority" advocates, alternatively THOSE QUALITIES to determine and dictate decision-making choices to be made:-

"Big Ideas" promoted by Lord Ashdown:-
I've got to admit, this "talking down" stance by Lord Ashdown compared with Tim Martin's very small and simple idea about "letting people contribute" eg "the back of the envelope calculations suggested in the audience by one of the people present... !

The figure presented by this person is not the positive result so much as the fact he was able to contribute and offer an alternative story. Let's have more of this.

Indeed, comparing Tim Martin, he seemed fairly relaxed about expressing himself and making some contributions, while besides him Lord Ashdown seemed so very determined to hold forth and sermonize from on high!

Perhaps he's gotten very used to this form of communicating, from all the long years of being a politician as opposed to one of the people?!
Posted by Red Cliffs Of Dawlish at 07:01