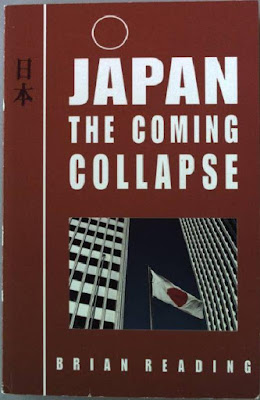 The Lost Decade or the Lost 10 Years (失われた10年 Ushinawareta Jūnen) is the time after the Japanese asset price bubble's collapse within the Japanese economy. The term originally referred to the years from 1991 to 2000, but recently the decade from 2001 to 2010 is often included, so that the whole period is referred to as the Lost Two Decades or the Lost 20 Years (失われた20年, Ushinawareta Nijūnen). Over the period of 1995 to 2007, GDP fell from $5.33 to $4.36 trillion in nominal terms, real wages fell around 5%, while the country experienced a stagnant price level. While there is some debate on the extent and measurement of Japan's setbacks, the economic effect of the Lost Decade is well established and Japanese policy makers continue to grapple with its consequences.

Once again Wikipedia is quite useful (donations welcome). I found Japan very fascinating growing up: It was a dynamic economy, a very distinct culture and it seemed to be a paragon of the spread of progress and prosperity around the world, with Japan leading the way. All very "80's" thinking back now! But it still is a fascinating culture and the one trip I managed to make so far there was to a very civilized and well-run nation, and stoic, given they were then suffering from the Tsunami that had only just hit them. An example of the difference of Japan:- 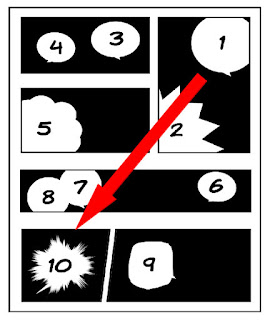 Guide on "how to read manga": Japanese books are read from Right-Left


Applying cyclical theory to Japanese history, Reading reckons the country is approaching a period of convulsive change after nearly five decades of recovery/expansion.

Some years later, at school, I read from front to back "A History of Japan". It's a fascinating account and seemed parallel to the multiple invasions of the British Isles and then again the interesting factional warfares therein. What seemed to stand out with Japan were a couple of notable events:- 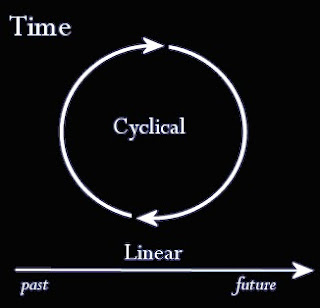 And of course to add to the above, the "Lost Decade", now "Lost Two Decades". People are familiar with the cycles of "Boom and Bust" and within certain parts of the world there seems to be a cyclic force around various events. Spain has gone through fracturing and unifying phases, and Europe has too via various "Empires" or powers. Seeking Alpha looks at Japan, The U.S., And the Lost Decades:- 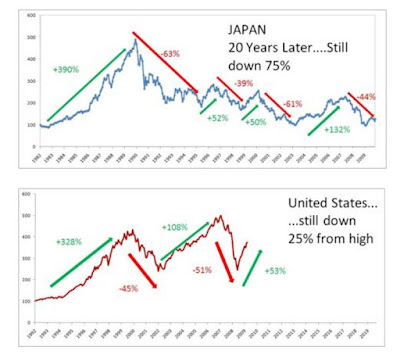 After the meeting EU Referendum: Leave Alliance launch I managed to pick up a number of Pamphlets from FUTURUS and Anthony Scolefield. It was very interesting to look at decision-making through an historic frame of reference for the UK. This has been covered with respect to the EU in The Great Deception, but events even further back on how we have been governed, by whom and how they have made their decisions and how successful those decisions were in showing understanding and hence right course of action to take or otherwise, if as often as not, people were merely "caught up in the larger events of their time". I think the EUROZONE CRISIS is predicted to be a similar "Lost Decades" for various nations:-

I notice Pete North is of similar mood concerning the UK and reflecting on it's own time-line trajectory concerning Peter Hitchens own musings to add to the party(!): The buyers regret of Peter Hitchens. There's an interesting game of "Top Trumps" being played by Chris Bryant Labour MP, who appears to me to be teh equivalent of a "Chinese replica" of Tony Blair; sharing a similar gleaming smile and "rabid eyes" combination: 18 people Brexit campaigners think they're smarter than over the EU. What's interesting is the entirely self-referential bubble of Top Trumps being conducted in the mirror article. I'm impressed with the breadth of topics selected for such a source in the Legacy News-Media; but that's about all. 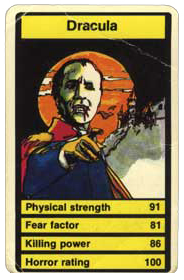 There's two considerations I thought of here:-
UK Unleashed has a very interesting blog on Polling Predictions, which is well worth a read: The Shy Goodbye. Whatever the case may be, I think there's a tendency for the Remain vote as per the telephone polls to be ahead: Reluctant Remainders: Submission to Power and also given the fact we have had a "Blitzkrieg" Referendum by David Cameron to win:

The longer the time available, 2 things:-
I've recently been contacting various family and friends and sharing this link with them:-

As UK Unleashed observes, it's tricky to answer the question in the right way "for leave". It requires a story, I think and the above I also think manages that via the framework of cycles in the history of the UK joining the EU, for example only yet another pattern to consider:- 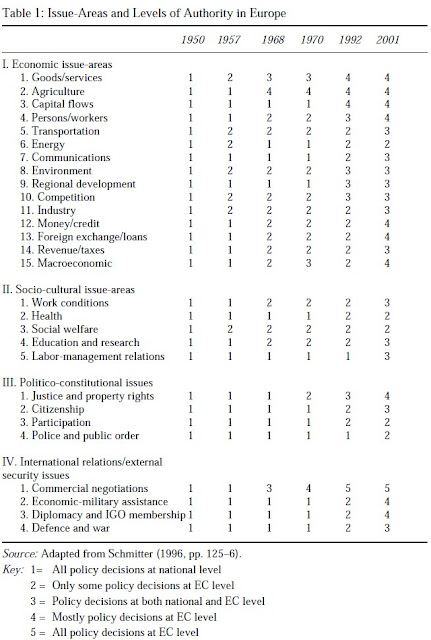 I think the problem could be alikened to:- 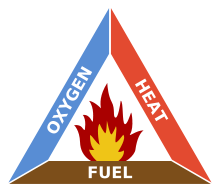 A very good example of the Oxygen starvation is this argument here:- 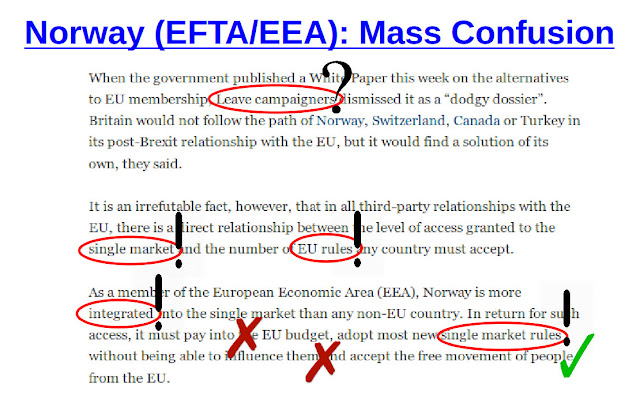 This comes from a source that is fairly well written: Brexit campaign failing to address how EU relations will be recast ~ Denis Staunton.


"The crux of the matter is that we in Britain want trade and cooperation; our EU partners want merger and a leashed hinterland. Are we prepared to spend another generation or more dancing around this basic fact while the rest of the world moves on?

No, it is time to leave and embrace the world."

You can see, that the arguments have been suffocated oxygen and public exposure to light a political campaign that "take alight" in the imagination of the British people by our own politicians: These people who are responsible in the EU and Europe for a lost couple of decades and generation of young people and for the UK/British, a lost couple of decades concerning our EU Membership since Maastricht Treaty (Single European Currency Treaty).

Roland Smith's advice to voters: Vote Leave now and save ourselves the next 10 years / decade, with the same starvation of oxygen to arguments via our politicians and their mistakes replicated and multiplied in the Legacy News-Media, until we are back here again in the next Referendum on Remain or Leave of whatever the EU becomes by then post-2020 pre-2025! 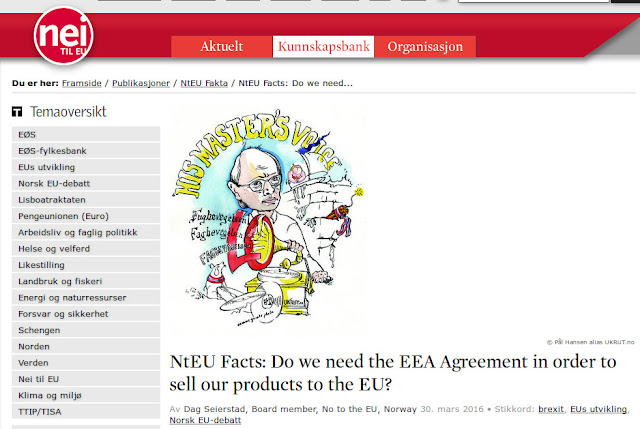 Norway also has a cyclic argument... concerning the "Pro-EU Deception"

"In the debate about alternatives to the EEA Agreement, claims are being put forward that Norway needs the agreement in order to sell its products to the EU. These claims are suspiciously similar to the warnings issued by the pro-EU side before the referendums on EU membership in 1972 and 1994. This scaremongering was proven wrong on both occasions.

Leading business figures, pro-EU politicians and the media, all with ready access to public platforms, continue to hammer away at the same message as in 1992: we must keep the EEA Agreement in order to have access to the EU market. The arguments put forward by the pro-EU side proved to be totally misleading in 1992 – and they are just as misleading today."


An intelligence-driven choice that learns from history and utilizes the high quality information that is available in this "internet age"; is I believe the solution at everybody's fingertips, to breaking these cyclical disasters driven predominantly by people in power making poor decision-making affecting generations henceforth.
Posted by Red Cliffs Of Dawlish at 18:40