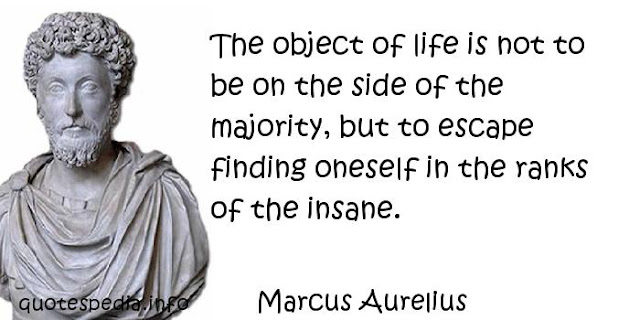 Marcus Aurelius is one of the well known Stoics

I was happy to see on the blog roll that Scribblings From Seaham had written another blog after a pause of about a week: The Silent Majority:-


"The American people cannot and should not be asked to support a policy which involves the overriding issues of war and peace unless they know the truth about that policy (emphasis mine)." [...]

"In the ‘run-up’ to the referendum in June this year we are inundated with articles and speeches by, to name but a few, Boris Johnson, Peter Bone, Nigel Farage, David Davis, David Cameron, Jeremy Hunt, Nicky Morgan, Matthew Elliott and George Osborne; all of whom give the impression, to those who have any understanding of ‘matters EU’, of not knowing one iota about the forthcoming referendum on the UK’s membership of the European Union." [...]

I always enjoy reading Scribblings From Seaham, and would recommend it to as many people as possible more insistently, except for the thought that sometimes checking your own enthusiasm is a more prosperous way of recommending something to others to possibly read! The previous blog is also topical and concerning one composition of this "Majority": The Young: The Education of Young Minds. This is a subject that has drawn some discussion recently, driven especially by the observant and entertaining, Semi-Partisan Politics with subjects such as "Tales From The Safe Space"; and also from Dr. RAE North: EU Referendum: I don't give a damn. Coming back to Scribblings From Seaham when he was writing at Witterings From Witney: The Forming Of Young Minds:

“And what is a good citizen? Simply one who never says, does or thinks anything that is unusual. Schools are maintained in order to bring this uniformity up to the highest possible point. A school is a hopper into which children are heaved while they are still young and tender; therein they are pressed into certain standard shapes and covered from head to heels with official rubber-stamps.”

“People would never be convinced about the value of being a member of the EU if we do not start early enough with the young people, before they form prejudices and are misinformed by sources.”


In general, The "silent" and the "young" do have certain tendencies as groups of people that render them impotent in politics more than not, as group categories that is. But my view is that "silent" or "young"; individually what matters might be what we can take from reading from the Stoicism:-

"Make for yourself a definition or description of the thing which is presented to you, so as to see distinctly what kind of a thing it is in its substance, in its nudity, in its complete entirety, and tell yourself its proper name, and the names of the things of which it has been compounded, and into which it will be resolved. For nothing is so productive of elevation of mind as to be able to examine methodically and truly every object that is presented to you in life, and always to look at things so as to see at the same time what kind of universe this is, and what kind of use everything performs in it, and what value everything has with reference to the whole."

My observation is that there seems to be few in the context of the EU Referendum who are truly "Stoic"; but it's these people who will lead the process of revolution if there is to be such a culmination. For most of the time, for most people, "The Silent Majority" applies and that is perhaps a fact of politics? Something those who would seek for positive change but cannot enact it. This result then seems to this "silent majority" to be proof that being Stoic is too much effort, requiring too much disciplined attention to a challenging subject to "to see distinctly".

I personally have benefitted in learning from the various blogs in the blogroll here a lot more than from:- 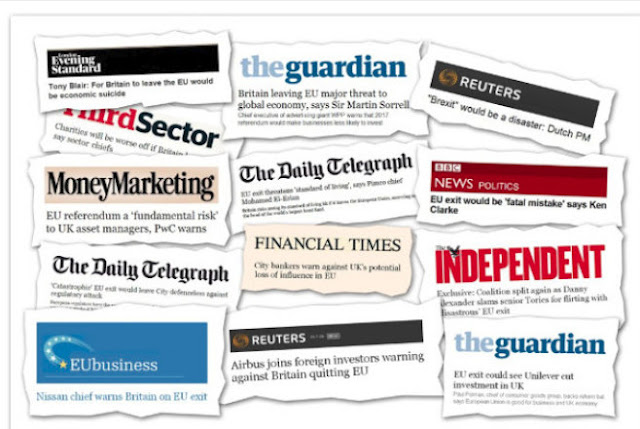 Learning less in a decade than 1 evening's conversation with a "stoic"
Even books have their problems:- 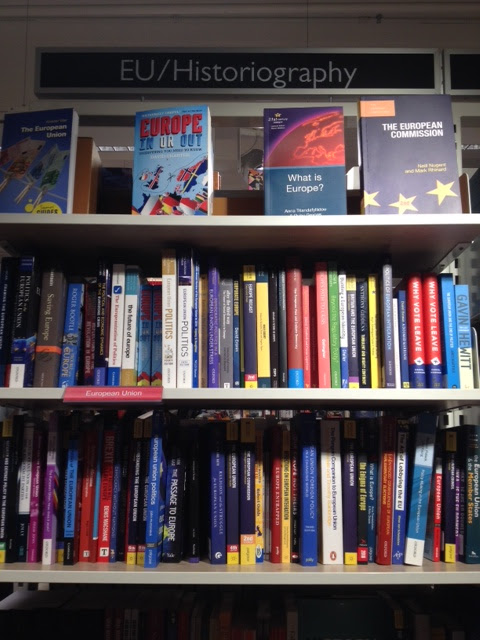 A number of new titles out in time for the Referendum, including Daniel Hannan's "Why Vote Leave" on the RHS 2nd shelf down. Longer books, more information than a scrappy news paper article...
I get the feeling a lot of these books, the readable ones that is, to most people, are written in a Conversational: Surely anyone would agree with that?" but entirely lacking a "philosophy" behind such propositional statements. The thing as with Hannan's latest book the more you know, the more you can flip through these books and quickly pick the valuable information.
But that takes a lot of dedication and effort to be able to have that ability. Something I'm acutely aware of considering I have had an idea for a book in my mind for a few years now, but realize I'm far away from the full expertise to be able to select and assort:-
They (Stoicism) held that there were four categories.
Additionally and/or alternatively:- 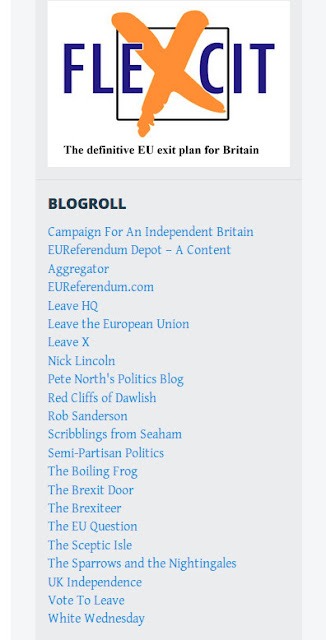 The Minority
To be very honest: I'm painfully aware that my own blogs aren't up to standard of many of the above blog and in not making the technical grade for detail, analysis and hence genuinely valuable insight and ideally education and useful conversation. I can point qualitatively select however (no mean result!):-

Or Roland Smith (White Wednesday): The Liberal Case For Leave

Or John Ashford: The Betrayal of Britain's Fisheries
Or Dr. RAE North: FLEXCIT: The Market Solution (pamphlet)
Or The Boiling Frog: Article 50: An Explainer