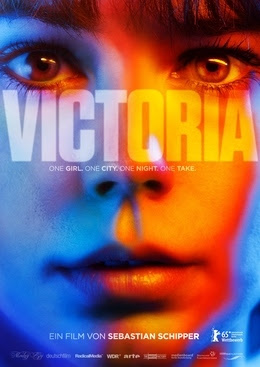 Just back from watching the above film Victoria. I mentioned another film out recently "High Rise" which as I expected though had hoped otherwise, was a little disappointing. This film, I think is exceptionally good: There's a strobe-light excess right at the beginning and if you get into the story your heart-rate might be pumping furiously, so be careful of those. Otherwise I thought it was cinema magic. I'm a big fan of the Dogme 95 film-making movement; and given Victoria, above, is very much a movie existing in the moment, in one single shot, it's a good fit:-


"Dogme 95 was an avant-garde filmmaking movement started in 1995 by the Danish directors Lars von Trier and Thomas Vinterberg, who created the "Dogme 95 Manifesto" and the "Vow of Chastity" (Danish: kyskhedsløfter). These were rules to create filmmaking based on the traditional values of story, acting, and theme, and excluding the use of elaborate special effects or technology. It was an attempt to take back power for the director as artist, as opposed to the studio."

But also recently I've been enjoying the Spring season and outdoors more; doing more sport and socializing more with more people who I want to catch up with. I noticed on a recent evening out, everyone was unexpectedly rowdy, as if feeling relief and letting go a bit more; that this time of year was beginning: It was a good night out. Anyway I feel this idea of following and finding a "joie de vivre"; is strong undercurrent in the above film, though other vibes may appear more visible.

Hence in considering the above; it's actually annoying that David Cameron seems to have had exclusive rights to dictate when we hold our Referendum, almost right on top of Midsummer, 23rd June, 2016. I wonder when people might have chosen when to hold it if given a choice?

As said, I've got more rewarding things to do, such as enjoying living and life at this time of year: We really should have been having this Referendum in October 2017 just at the turn of the season and I start feeling miserable again! Instead it's clashing with:-
Etc, in general people are making plans to enjoy their time. So no thanks to our Prime Minister for holding a Referendum on 23rd June, 2016; with the necessary very short couple of months for people to be "alerted" that yes indeed we supposedly do live in a democracy... and hence should be given a "good show" by the politicians and media about that ""fact"". What I think is certain, our Prime Minister will keep on hearing "Banging on about Europe (EU)" if people vote to Remain. That's almost "guaranteed". People still complain that they don't know enough and yet it's full steam ahead to erase "Uncertainty"!! As with the "hang-over" from the Scottish Referendum; which was always similar to hype over watching a film, that's risen so high, that wehn it comes out: It really disappoints: EU Referendum: the irony in honesty. In this case we've been waiting for over 40 years for such a Referendum. The sense of disappointment and lack of resolution I'm sure will be palpable!

Anyway, can't recommend the above film enough if you like either foreign films or fairly intense stories.
Posted by Red Cliffs Of Dawlish at 18:21