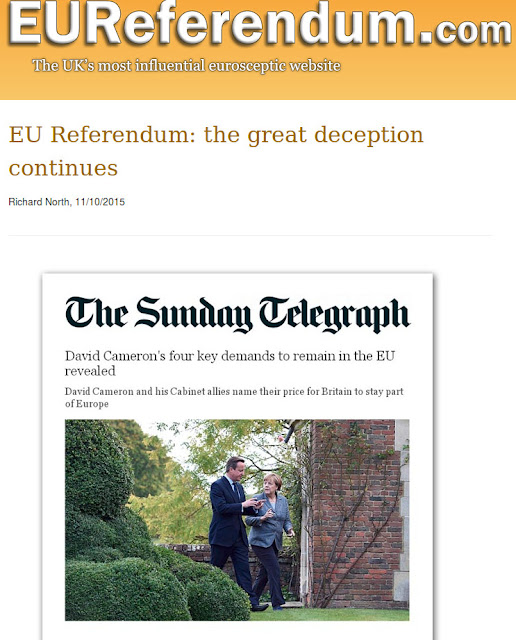 With perfect symmetry, EUReferendum.com writes on yet the latest in a long and embellished and prestigious history of deception concerning the EU Referendum: the great deception continues . It seems to me that David Cameron is taking over from where John Major left off, as if nothing has changed in between. Our government has actively been prevented from increasing our membership at the same time as being passively driven by events despite "all their most clever intentions" towards Second Class Membership Status of the EU aka Association Membership/agreement aka 2-Tier/2-Speed EU/Multi-speed EU. 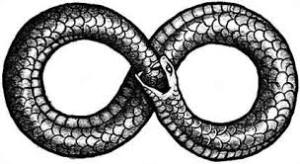 Infinity Symbol (loop) in the shape of "a snake of deception"
Scribblings from Seaham (see blogroll) muses, Knowing not – no surprise there then -

Paraphrasing H.L. Mencken, it would seem the aim of present day politicians, especially the blue ones, is to keep the populace subdued and content with repetition of their imaginary acts of patriotism.

I see today that David Cameron, in his closing speech to the Tory conference, repeats the lie that we have ‘got out’ of bailouts – no we have not, Mr. Cameron. It is worth recalling that, although he chose not to repeat them, neither was there a treaty vetoed; and nor is Norway ‘governed by fax’.

What he did repeat, by inference, is that to trade with the EU we need to be ‘in’ the EU to have access to the Single Market – no we do not Mr. Cameron.

The infinity loop in journalistic reporting

Isolating Tim Montgomerie's perspective; it's not unreasonable and possibly very persuasive because he's emphasizing the process of how to persuade people. In Game Theory (applied) he might seem like a canny player:-

I think he falls foul of 4. but is backed up by 1.-3. So far so good. Yet his mentality is the key to his point of view: His view of the world like so many in the News-Media is shaped by Journalistic Objectivity, which itself is a victim to the Politics of Plausibility (Sensemaking) which itself is concerned with the "most popular opinions", not necessarily the most applicable factors:-


People favour plausibility over accuracy in accounts of events and contexts (Currie & Brown, 2003; Brown, 2005; Abolafia, 2010): "in an equivocal, postmodern world, infused with the politics of interpretation and conflicting interests and inhabited by people with multiple shifting identities, an obsession with accuracy seems fruitless, and not of much practical help, either" 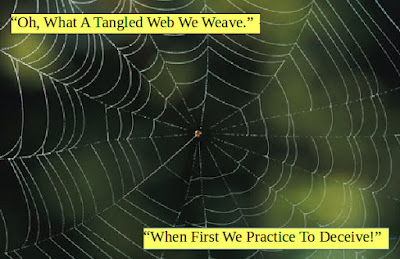 Effectively it is an argument that is relies on the superficiality of prevalent conditions and of course argument via omission:-
One underlying assumption in this argument is that people's levels of ignorance/knowledge on this subject are more or less determined or fixed, as per the plausibility of persuasion and hence cooperation (above). I would accept this argument as a pragmatic approach to encouraging millions of people to shift their opinions after decades of propaganda to the contrary; not an easy task to achieve! Except, here's the rub, the politicians are the practical experts at this type of argument as exemplified by David Cameron in Big Ben: The Four-Faced Liar and they'll be the real winners if you take this Road To the European Union.

And one of their most powerful weapons is literally make us bored to death or Argumentum Ad Infinitum / Nauseam :-


Argumentum ad nauseam or argument from repetition or argumentum ad infinitum is an argument made repeatedly (possibly by different people) until nobody cares to discuss it any more.

What is so perfectly symmetrical here is that it then follows onto the economic argument so effortlessly as we could have predicted! The Anxiety Loop we talked about previously, in Our Government: "Ifs, Buts, Maybes"


We now know that as ants move around through the ground litter of the forest, they follow a trail of pheromone molecules laid down by those who have gone before. They also leave a trail of their own, to recruit other ants to follow. (If they didn’t, the first ant’s marker would gradually fade, and the trail would die out.) Such a system facilitates rather remarkably complex collective behavior, including sophisticated decision-making, by groups of individuals who are themselves all but brainless. But it can go wrong. When an ant trail by accident crosses itself, the ants following it can become stuck in an endless loop, laying down a stronger and stronger trail that sucks in any other nestmate who happens to come across it.

What does any of this have to do with human psychology? Well, the ant mill is a graphic illustration of a complex system that goes off the rails without any damage or trauma to any of its components. The ants aren’t sick; they aren’t insane. They’re doing exactly what millions of years of evolution have programmed them to do. The problem is that an ant colony at a system-wide level has an error mode which, once entered, cannot be escaped.

Pete North (see blogroll) provides yet another example here Setting the stage for the Cameron deception. What's the solution? Well as per Dr. RAE North's simple response, which seems to dodge this "cleverness trap" we have to follow a trail that is rigorous, using knowledge, creating an "intellectual architecture" to use to navigate by as per The Greatest Political Problem of Our Time ... 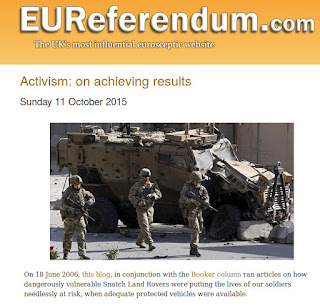 ...So that we too don't get stuck in an "ant mill" or "death circle" false trail laid down by our deceptive politicians or "cleverness trap" journalists; instead of using our own capacities for criticism and enquiry and taking responsibility for our own state of knowledge and hence decision-making capacity; which we considered in Pattern Recognition. "Honesty is the way forwards" and so a correct, simple and honest response to David Cameron's poorly cast role in The Great Deception is in my opinion:-

Posted by Red Cliffs Of Dawlish at 12:16