Lord Huron - Strange Trails: "Meet Me In The Woods"

I like to take Birthday celebrations quite seriously if possible, in that the essence of the celebration, for me, is in a word: "Timeliness", not necessarily the quality of the actual present. For my brother's Birthday, this year I'd ordered some things that needed to be put together in a box and presented. But as usual, with the work week it would have to be given on the week-end a few days late. So, while generally shopping around for something to give on the day, I heard the above song being played in a shop. The interesting thing with music, is that it can powerfully strike you in an instant: "This is good!". Anyway, long-story-short: I bought the above album Lord Huron - Strange Trails gave it to my brother with a card and it actually turned out to be a real hit with him; giving a lot of happiness, positive energy and continues to do so. I don't think I've ever been successful like that with music before; "there's no accounting for taste" but I recommend the above album, given it's happy record so far!

In Fatal Car Crash: Two Dead After Car Accident Lucy Thomas of Deputy Director of "Britain Stronger in Europe" (BSE for laughs!) made the claim that inversely to the above contention:-


"Because we don't know what out would look like."

Implicit in the above blog without explaining it, purposefully, was that effectively, if you were to boil-down the essence, the "music" of her argument it is the above "Negative Outlook": According to Dr. Raj Persaud, she might be suffering a bad case of ANTS (Automatic Negative Thoughts)! Do you like the sound of that music? I know I don't and here's why: The reason this imho is the "real sound" being played is because her arguments as with so many of the Pro-EU arguments rely on increasing the volume on this "music" so that it drowns out any other choices and tastes in "music" that people may prefer to hear. It's music that is not intended to be "enjoyed". Why is this so important? Because as soon as the room fills with the cacophony of arguments all with different people clamouring for their preferred music you have a definite result: The question of what music to play becomes divisive - itself. And once that verdict is reached and is observable to all; the whole experience is considered negative, "Let's just put back on the music that we were all listening to before we all started falling out with each other." Aka as explained the Status Quo Effect kicks in.

update 22:00 GMT: (another match found): Yes, the EU is flawed. That's exactly why we can’t just all walk away "For the next one or two years, any facts with be lost in a blizzard of spin and counter spin, black will be white and up will be down." 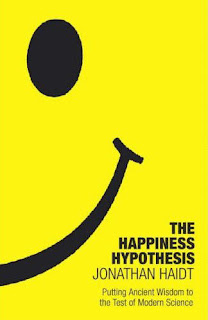 The upcoming Referendum is probably going to feel like to a lot of people, like a journey such as Jonathan Haidt recounts in The Happiness Hypothesis: Chapter 1: The Divided Self:-


I first rode a horse in 1991, in Great Smoky National Park, North Carolina. I’d been on rides as a child where some teenager led the horse by a short rope, but this was the first time it was just me and a horse, no rope. I wasn’t alone—there were eight other people on eight other horses, and one of the people was a park ranger—so the ride didn’t ask much of me. There was, however, one difficult moment. We were riding along a path on a steep hillside, two by two, and my horse was on the outside, walking about three feet from the edge. Then the path turned sharply to the left, and my horse was heading straight for the edge. I froze. I knew I had to steer left, but there was another horse to my left and I didn’t want to crash into it. I might have called out for help, or screamed, “Look out!”; but some part of me preferred the risk of going over the edge to the certainty of looking stupid. So I just froze. I did nothing at all during the critical five seconds in which my horse and the horse to my left calmly turned to the left by themselves.

As my panic subsided, I laughed at my ridiculous fear. The horse knew exactly what she was doing. She’d walked this path a hundred times, and she had no more interest in tumbling to her death than I had. She didn’t need me to tell her what to do, and, in fact, the few times I tried to tell her what to do she didn’t much seem to care. I had gotten it all so wrong because I had spent the previous ten years driving cars, not horses. Cars go over edges unless you tell them not to. Human thinking depends on metaphor. We understand new or complex things in relation to things we already know.

For example, it’s hard to think about life in general, but once you apply the metaphor “life is a journey,” the metaphor guides you to some conclusions: You should learn the terrain, pick a direction, find some good travelling companions, and enjoy the trip, because there may be nothing at the end of the road. It’s also hard to think about the mind, but once you pick a metaphor it will guide your thinking. Throughout recorded history, people have lived with and tried to control animals, and these animals made their way into ancient metaphors. Buddha, for example, compared the mind to a wild elephant:- 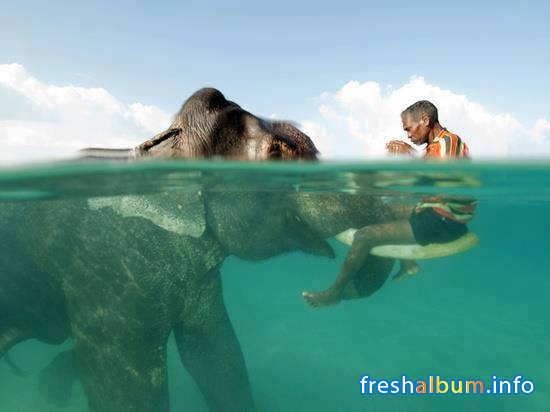 Working together: Gaining your Elephant's trust!

In Of Democracy and Time Dilation we looked at the metaphor of making decisions according to "compression" and "tension". In my opinion, too much tension which is "chronic" because it is "unknown" leads to "anxiety" and that then leaves us in Argumentum Ad Infinitum territory. However the opposite is true too also, and this gives the Pro-EU FUD more substance than it deserves: Too much "compression" is also negative. This "second-gear" outlook or to catchphrase UKIP's message of "Splendid Isolation" acts in tandem to produce the observed Fatal Car Crash: Two Dead After Car Accident . A video that is quite stirring that manages to capture these two "Doors Of Deception":-

Chimpanzees constrained in a lab for 30yrs: Seeing the outside for the first time...

I think what is so stirring about the above, moment of time captured, in this video is the "flash of recognition" on the Chimpanzees faces, the balance of emotions and perceptions starting with a tightening of apprehension but expanding into a joyful happiness...

Unfortunately, there must be a cautionary principle even when celebrating this particular, "Happy Ending". A good short story that captures this is R.K. Narayan's Malgudi Days: The Blind Dog: It's a very entertaining and masterfully written short-story that I would not wish to spoil; but like the above music also highly recommend!

With no "mental map" the senses can't interpret "what is possibly beyond".

So far as per The Great Deception, the focus has been on the problems, "The Cage", then we've started to look at "the possibility of the cage door being opened", today. This we really are referring to as The Referendum Process itself as "The Cage Door". This in itself, requires a lot of discussion, some which Pete North (see blogroll) provides in Referendum ruminations, a lot of hope and opportunity: The building of Anticipation up to "The Big Day" (as my father used to mock me and call the first day back at school!). I can't help but remember the pictures of the Scottish Referendum the day after; their Dissipation:- 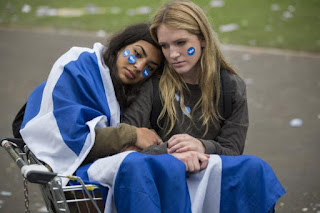 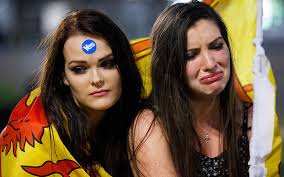 Happiness: Achieving our purposes?
As with the music, I think these pictures, speak for themselves, we can intuit immediately their meaning. But the cautionary tale is not understanding our purposes and so we end up feeling as if "The Cage Door momentarily opened has been slammed shut on us." What needs to be done is a clear vision of not just "The Cage" or "The Cage Door" but "Beyond The Cage" "outside it" as Lucy Thomas says above.
I feel sad for the above emotional experience of the Scottish people who wanted to experience a political 'quake of some positive kind. It would be too much to try to summarize so much here. But fortunately a real master at this already provides such a "narrative": Dr. RAE North (see blogroll) writes in language we can comprehend: EU Referendum: back to basics :- 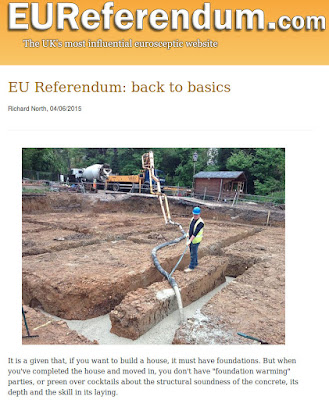 Building foundations = building our purpose, beginning with the basics

In terms of our "no" campaign, with a little help from our friends, I have been gradually able to whittle down the essence of our "intellectual foundation" to three words: problem; solution; and outcome. Now mixing metaphors outrageously, I jump from foundations to three-legged stools. I liken these words to the legs of a three-legged stool. They effectively constitute our "offer" to the public, upon which we will ask them to vote "no".

Here we've taken a different route to the same conclusion: "Cage", "Cage Door", "Beyond The Cage". Here I've tried to use an emotional approach to understanding. These are not merely highfalutin sales pitches. Only today we're seeing the seeds of "negative dissipation" being planted by the various "Leave/Out/UKIP" groups: EU Referendum: lured into the trap where the media is no help to us either from Pete North (see blogroll): A grown up referendum debate is too much to ask of our media and in conversation on LBC Radio, Pete is very articulate albeit trying to chew out a lot of complicated interactions altogether!!


However we do gain rare glimpses of what "Beyond The Cage" looks like and this blog's theme is a diversion from the negative to the positive: Happiness and understanding our Purposes better through understanding that we often behave in complexes of actions between that of our "Elephant" (Emotional) and our "Mahut" (Intellectual). But time is the ultimate frame of reference for us all: "The Cage Door"  will be left open for a short and limited period of time leading up to the Referendum allowing people to drive the political process for the first time in >40yrs; not the professional politicians: It's up to us to find out what "Beyond The Cage" really does look like, and start doing so now. White Wednesday (see blogroll):- Globalisation is killing the EU. Bring it on "The will to win is important, but the will to prepare is everything."

Even within the News-Media BBC show The Daily Politics with Owen Paterson we gain a glimpse amid the pea soup fog of Westminster-Media dysfunctional Politics, with yet another reference to "Beyond The Cage" = A Leap Into The Unknown" (Lord Rose, one of our cage-keepers):-

Owen Paterson: A Torchbearer in the pea soup fog of The Westminster-Media Bubble

Be positive, it may feel "strange" but it's not a leap if you spread your "wings of knowledge"; it's a flight of freedom:- 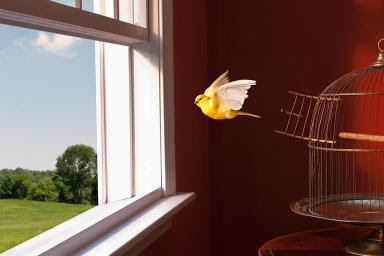 "If god had wanted humanity to fly (s)he would have given us..."

Posted by Red Cliffs Of Dawlish at 06:17