The Price Of A Glass Of Water 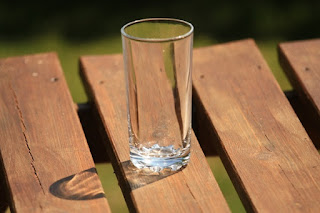 An empty glass 'of water'
The Pro-EU argument is more or less reliant on the above result: 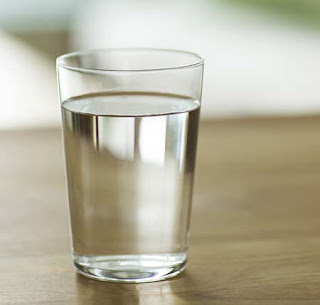 A full glass of water
The Anti-EU argument is more or less the opposite result (unsurprisingly!):-

In effect, the message I think most people who are dimly aware of the EU and Brexit and the Referendum will form is to access to what degree:-
Is the glass half empty or half full?

"Is the glass half empty or half full? is a common expression, generally used rhetorically to indicate that a particular situation could be a cause for optimism (half full) or pessimism (half empty)" 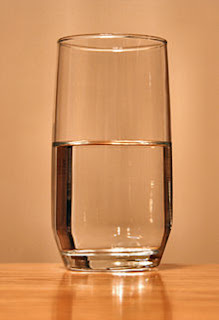 Is the glass half empty or half full?
I think most people would like to think of themselves as "glass half-full people". For this reason, and the trends already outlined, the new fashion in EU Politics is to call oneself "eurosceptic" Politicians: No Taste, No Style, So Derivative! with a perfect example only today from Michael Fallon on The Andrew Marr Show:- 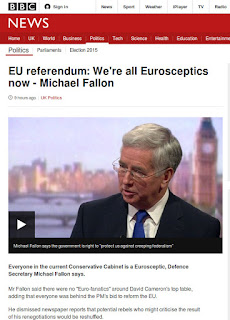 Michael Fallon smartly sports the latest trends
Secondly it will be less effective for the politicians to re-use "Project Fear" aka FUD (Fear, Uncertainty and Doubt) as The Brexit Door (see blogroll) writes about: Project Fear – IndyRef is not the EU Referendum and in fact CER are worrying over this issue too on their side: EU referendum: What should the In campaign be saying? - Is it time for hope or fear? (Which sounds a lot like our Glass Full (hope) vs Glass Empty (fear) analogy) not least because exposure via x1 Referendum in our memory "inoculates" us from subsequent dosages inherently; added to which the well-accepted truisms of our EU Membership for over 40 years have become so hackneyed (and therefore accepted) as to form myriad cynical jokes and hence humour is a potent antidote to the above:- 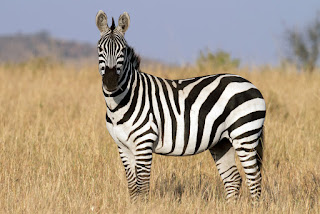 "A prize was to be awarded for the first person to discover a horse with black and white stripes like a zebra.

A German, a Frenchman, an Englishman and a Spaniard participated hoping to win the prize of €1 million.

The German decided to spend weeks in the National library researching into horses with black and white stripes. The Englishman went straight to a shop in Piccadilly which specialises in hunting gear, bought all the equipment necessary and set off for Africa in his quest for this strange creature. The Frenchman bought himself a horse and painted it black and white . The Spaniard went to the best restaurant he knew in Madrid, ordered an expensive meal for himself with a fine bottle of wine; after the meal he ordered an expensive Havana cigar and a Napoleon brandy, sat in a luxurious arm-chair in the hotel and began to consider what he would do with the 1,000,000 euros once he had found this remarkable horse with black and white stripes."

And thirdly, it's just "plain, common sense" to most people: Selling the EU as a benign force has lost it's sheen as we discussed in Lakshmi: Goddess of Prosperity (2) and this seems to be in agreement with Jon Worth's Britain Stronger in Europe – horrible framing and imagery, and a message bordering on the disingenuous.

This must be tempered however by the overblown hype and noise of the Anti-EU campaigners; for so long "a single, niche issue" they're still in "Attention-Seeking" mode, not realizing that switching to making what they have to say interesting because it's informative is very important as Mr. Brexit (see Vote To Leave EU blogroll) warns: Brexiteers: Europhiles at play, so be precise in what you say; namely that their glass-full conceit is falling into a trap as Pete North writes (see blogroll) TheKnow.EU - it's a problem
Lost Leonardo (see blogroll Independent Britain) at also points this "Glass Half-Full or Half-Empty"simple form of the debate in Cutting Through The Noise and of course this is backed up by Fact Check: FactCheck: more questionable numbers in the EU debate 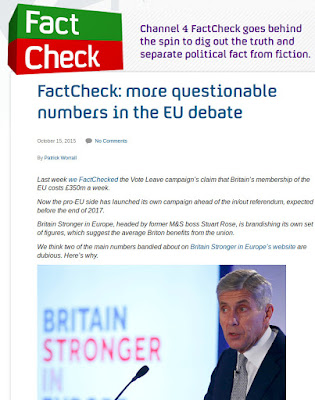 Both sides arguing over "The Price of A Glass Of Water"
We're seeing that they're arguing over:-
Dr. RAE North (see blogroll: EUReferendum.com) writes effectively this is leading to: EU Referendum: bored to death. This was all already covered in FLEXCIT :-

"But we do expend some effort in looking at the referendum which precedes the Article 50 notification. In  so  doing,  we  seek  to  remedy a  major  weakness  of  the  IEA's original exit scenario,  which  asked  contestants  to  look  at  the  exit  plan  in isolation. It did not allow for the possibility that the referendum campaign, and the events leading up to the decision to leave, might have a significant effect on the conduct of the exit negotiations – and vice versa.

This is a point that cannot be emphasised enough. The negotiations will not take place in a political vacuum.

The other point, here, is that these will be negotiations – i.e., a process which involves discussions with other parties, culminating (we trust) in mutual agreement. The UK proposals, therefore, will have to take account of the views of their negotiating partners, and we will have to accept that compromises may have to be made."

If we ask the simple question: "How much is the price of a glass of water?" We probably come to the conclusion it's either free (eg tap-water) or at the most a very small charge compared to any other beverage. But if the context of the question is imposed:- 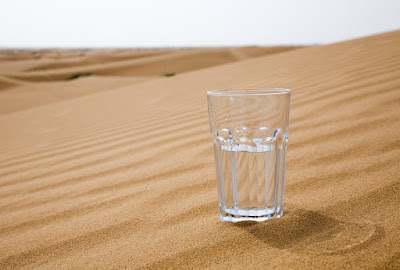 What is the price of a glass of water in the desert?

It becomes an altogether different answer: The "price" of life or death possibly. And so it is concerning The UK retaining access to the Single Market as the price of withdrawal from "Political (Ever Closer) Union".

Posted by Red Cliffs Of Dawlish at 15:43