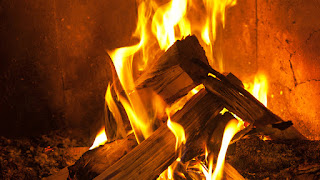 A source of warmth, light and a sense of safety and a place for stories

It's that time of year again, when "the clocks go back" and "the nights draw in". Time for log-fires if you're lucky enough to have one, to keep warm both physically and mentally, after eating a hearty roast lunch or dinner, perhaps. A nick-name for fires outdoors is "squaddie tv", as it offers an inherently absorbing spectacle when you're outdoors pitched-up for the night. I remember reading one of Haruki Murakami's books, in which it's speculated that the reason Russians come up with so many interesting aphorisms is because they have such long Winters to think about them!

Camp fires as well as log-fires tend to be good times to hold conversations, share stories and think more meditatively. One interesting conversation often concerns the make-up of the actual fire itself such as:-

For log-fires I generally find the pyramid technique works best with different size pieces: They tend to insulate the sides and fall into the middle reducing the speed of loss of hot air upwards, and generally easier to "top-up". This will be a staple of my conversations in the darker months to come! Of course living in colder climes such as the UK and Northern Europe, a large part of how we run our societies is dictated by the need to keep warm, historically. This meant a greater "pressure" to plan for the future and for communities to organize and plan collectively, to see out the Winter.

I can't help but think this is similar and a good time to consider the UK's future, with from October, a likely 2 years or 23 months count-down to the EU Referendum which seems likely in 2017. Interestingly fires have a long prehistoric place in our culture and language:- 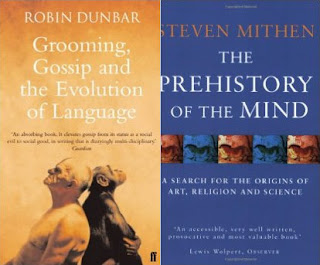 In Stephen Mithen's The Prehistory of the Mind, we see how long in our species evolution was spent "around fires"; the first spark of our future civilization's growth. The process was very long, but Professor Mithen speculates that general types of intelligences integrated over this evolutionary period, resulting in the "sudden" spike of progress in homo sapiens culture and hence evidence in the archeological record. Robin Dunbar explores in Grooming, Gossip and the Evolution of Language, the correlation between "brain size and group size" in apes:-

"What Dunbar suggests—and his research, whether in the realm of primatology or in that of gossip, confirms—is that humans developed language to serve the same purpose, but far more efficiently. It seems there is nothing idle about chatter, which holds together a diverse, dynamic group—whether of hunter-gatherers, soldiers, or workmates.

Anthropologists have long assumed that language developed in relationships among males during activities such as hunting. Dunbar’s original and extremely interesting studies suggest otherwise: that language in fact evolved in response to our need to keep up to date with friends and family. We needed conversation to stay in touch, and we still need it in ways that will not be satisfied by teleconferencing, email, or any other communication technology. As Dunbar shows, the impersonal world of cyberspace will not fulfill our primordial need for face-to-face contact."


In short the basic "modules" in our ape ancestors began increasingly to integrate via language development in connection with increasing group size and social communication. What's pertinent to this blog is that Dunbar's Number is an "upper limit of ~150 and secondly that we need conversation as humans amongst those we trust, to exchange valuable information, connect ourselves to valuable social relationships which all deeply influence our decision-making capacities for successfully predicting events and hence making good choices for ourselves.

What this demonstrates is the huge value that personal social networks will have on our national debate in the upcoming EU Referendum. Dr. RAE North has coincidentally taken this option though arrived at via alternative means, most interestingly to take note of; EU Referendum: the cascade system and which is one of the motivating inspirations for writing this blog; attempting a new entry per day for one month on general themes and the context of the argument. But it ties in with the above science, that how you choose to make your decisions relies as much on your sources as it does on who you trust, the people behind the sources! And I have pause to be positive given a recent article exposing The Establishment's strategy in the run-up to the EU Elections:- 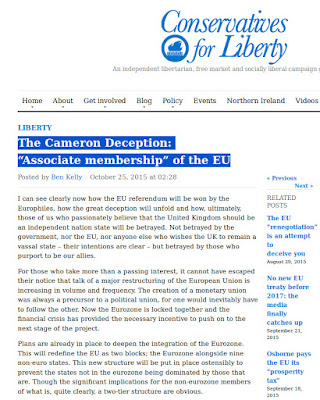 The Cameron Deception: “Associate membership” of the EU ~ Ben Kelly

Ben Kelly, The Sceptic Isle (see blogroll) writes: The Cameron Deception: “Associate membership” of the EU and really shows for one of the few times nearer and nearer "real time" the working of The Great Deception (beyond EUReferendum.com). We come back to telling stories in front of fires and how these stories were instrumental either in information exchange or in social cementing of relationships and how in our colder climes we tended to need to plan ahead for our survival. Well today, in the modern world, the basic needs are still the same even if they take different forms. For many Modern Family s' the Television takes center stage in the sitting-room as the "glowing images flicker comfortably in front of our collective eyes, entertaining us and allowing us to collect together in front of it too. Where our ancestors' communities might have gathered around a fire, to exchange useful gossip and information, we now tend to rely on our televisions for our "national debate" shaping narratives. Unfortunately, the TV despite it's "quantum leap" in technology compared to a log-fire as entertainment is not an unqualified success or mixed blessing: Dr. Aric Sigman's work in my opinion is of interest; particularly his work on attention and infants exposure to television apart from national statistics on television "consumption" leisure time. As anyone who has young children might be able to tell you: TV is a tempting "baby-sitter" and equally a very tempting "default" relaxation device to switch on and "veg-out" viewing of an evening, after a long work day. 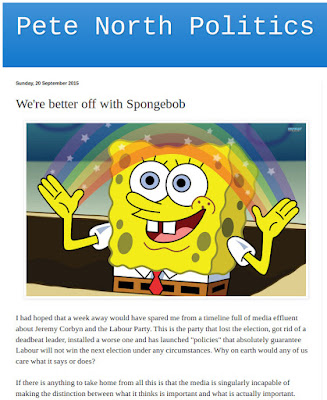 TV Tendencies: "Why... how did I end up watching this crap?!"

As Pete North writes (see blogroll) We're better off with Spongebob, with focus on political "trusty-worthy" or even useful source of information, our tv's may beguile us with "familiar faces stepping into our living room and talking to us about politics" but it is an illusion, we might be more on guard of if we choose more carefully who to trust and where we get our information from. My suggestion for this Winter, until the days are once again long, warm and full of better things to do outside than inside, would be to invite some friends around (or go to a pub where they put on a good, roasting blaze) and "switch on" some "squaddie tv" and arm yourselves with more useful and trustworthy sources of information such as from White Wednesday (see blogroll) in this stupendous compilation, bursting with interesting content to hold your attention and act as valuable information you might be able to share with those you know and trust: The Norway Option — Some bookmarks:- 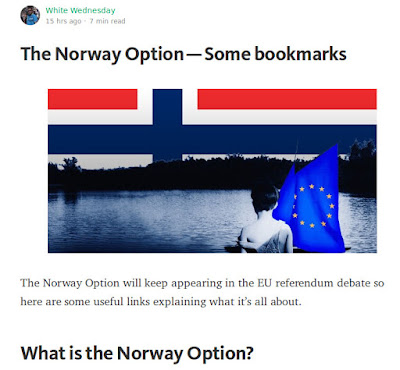 Posted by Red Cliffs Of Dawlish at 16:40