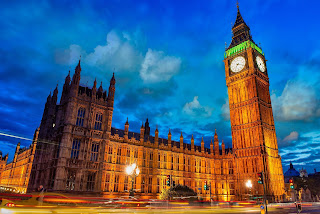 It's a beautiful sight to pass by the Palace of Westminster with it's "Clock (Elizabeth) Tower" also known as "Big Ben" (actually the name of the bell). It's one of the sights I always enjoy in London. Let's imagine there's something wrong with the clock's mechanism in Big Ben and each of it's four clock-faces still manages to tell the time but each face is now telling a different time of the day, depending upon which face you can see. Now imagine that this was not a malfunction at all but a deliberate and subtle manipulation of the clock to produce different times in each direction as if the people in those directions all disagreed on what time it was and insisted on their own time of day! 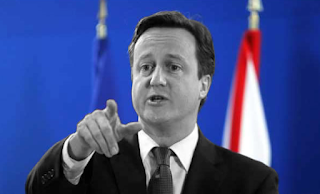 Just as with the allegory of The Goldfinch and the Gilded Cage. Let's now imagine that "Big Ben" represents David Cameron himself and his position on the EU: He says different things to different people according to what he believes they want to hear. David Cameron as Prime Minister and politician and leader of the Conservative Party is not in the business of working out what the actual GMT really is: He's in the business of selling the most "popular time" according to a deception of what the "actual time" is. This "popular time" is known to not be particularly accurate or consistent but that is now accepted, what concerns the media is the competition between the different faces, now to which Lost Leonardo observed also: 2-Track Debate . 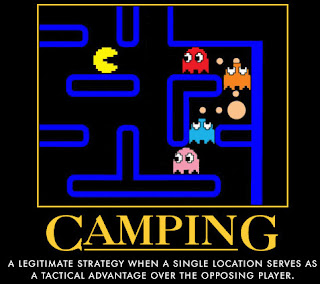 Pete North in his blog The task at hand... (see blogroll) also highlights this central focus of the flaws in the "eurosceptic" side of the argument stemming from David Cameron's "Four-Face Liar" warping influence on the arguments as per the Politicians and then the Media reporting the Politicians which we saw in You know, we're just not reaching that guy. effectively the arguments are on another track from the Public: It's not about finding out a universal time-keeping for all people to benefit from, it's about controlling the "Clock Tower"/Big Ben for political reasons. Interestingly this process is replicated by the EU as well in comparison with the Global Stage: Little Europe is retreating from the world.


If anything it is the banks who are leading the way because they like regulation, they like standardisation and they like global networks without technical barriers. In many respects they are way ahead of downstream lawmakers like the EU in terms of creating a global single market in banking. But that's never good enough for the EU. The EU always attempts to claim such initiatives as their own. In any other sphere it would be considered plagiarism. It is born of this myopic little Europe mentality, where Europe breaks away from the global effort to focus on its own back yard, further complicating what is already fairly good regulation.

Consequently, by creating a technical barrier to trade with the rest of the world, it means is that the rest of the world will suffer "the Brussels effect" whereby any nation that trades with Europe will adopt the EU standard by default because compliance with the most stringent is usually the cheaper option in the long run and less hassle than running two concurrent regimes. But that's only for the big boys who can afford it. Smaller operations and start-ups will simply ignore Europe and seek investment opportunities with less developed states who use the global default standards. Rather than being free market, once again we see "little Europe" putting its head in the sand and protecting its own internal economy at the expense of doing business with the evolving global markets.

The EU's first priority is always the taking of more powers by means of the beneficial crisis doctrine - and its supranational ambitions always take priority over what is in the common good.

As above, the strategy being employed in some genres is known as "Camping or holding onto the high ground on the battlefield". And it's as per the above blogs to control the debate. And how has David Cameron and the Conservative Party achieved this? By the adoption of lower quality arguments on the "eurosceptic side" Camping side via:- 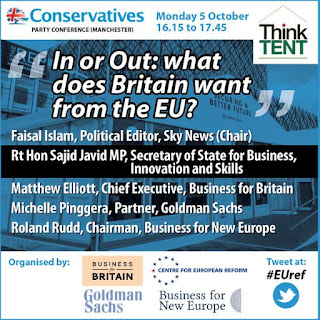 The above is an example of the bread and butter of the poor ability of the News-Media to cover Politics and the results are invariably:- 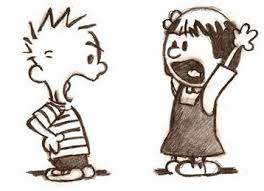 Media Politics: The Rat In The Room


The arguments will effectively crystallize (as per Aldous Huxley) around David Cameron's False Choice Referendum framing of the debate to include as many people as possible (telling them the time they want to hear). How it works is where the select few participants have already established their own counterfeit version of "World Disclosure" what we've been referring to ever since from Dr. RAE North's quote as Media: lacking the intellectual architecture noted in the Inteview with Owen Paterson on the BBC previously via "example in action".

via predominantly Business For Britain:- 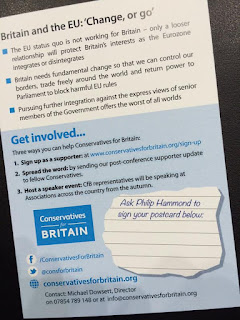 The underlying assumption that is negated as "a given" is even within their book's title: "Change Or Go" s having framed the debate as a "business case" the economic arguments will please the media (See Calvin arguing with Suzie above) and retain control via being so nebulous that the painfully important political decision of providing a Popular Referendum to the people will be perfectly pitched as:- 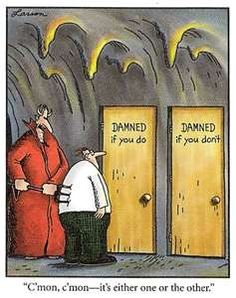 And here's a 6th and all-important lesson for "Brexiteers" to learn: If we do not understand how to argue correctly, and this means we do not develop an intellectual case for Brexit, which means creating an "Intellectual Architecture" or "World Disclosure" ( Erschlossenheit) then we cannot structure our arguments and the result is the ability of the Establishment and David Cameron to set the trap above as depicted in Gary Larson's imagining of the "Catch-22" argument. This point was made right at the very beginning: "Beginning to begin": How do you become a "eurosceptic" Brexiteer?

Without beginning in the right way, we end up with almost everyone setting their watch by Mr. Cameron's "Popular Time". But wouldn't you like to know what the "Actual Time", really is and wouldn't that be much more universally useful to the people?