Learning & Playing The Rules Of The Game

Specification of a Rugby League field of play (pitch) - not football!

The above Rugby Football League (Rugby League) team sport's field of play dimensions is an integral part of the rules of the game, defining the game space and as you can see, are themselves strictly defined. In such a contest 2 opposing teams obey the same set of rules and within those limitations, attempt to out-play each other. In general the number of players per team game ranges from about ~4-25. Robin Dunbar as per Dunbar's Number points out:-

Robin Dunbar: "The size of almost all inner cabinets around the world is somewhere in the order of 12 to 15. People seem to settle out at these grouping layers quite naturally, according to the task they’re doing." "Without language, Dunbar speculates, humans would have to expend nearly half their time on social grooming, which would have made productive, cooperative effort nearly impossible."

Different group sizes are required for different tasks and the greater the group size the rise in "overhead for group cohesion" as briefly looked at in When To Attend/Hold Meetings. It follows, that areas of the world with a "tribal" composition of human groups need to spend more of their social overhead on group cohesion activities, such as religious practices and observances, and/or bureaucratic organization at a national scale or else they lapse into "Failed Nation State status" such as Sudan: Lords of the Tribes - The Real Roots of the Conflict in South Sudan.

It also is worth suggesting that the EU's drive alongside the European Court of Human Rights (ECHR) to create and support a "universal human rights set of rules" is firmly rooted in the absolute necessity to service the increasing "group cohesion overhead" of political union of 500m Europeans of diverse and different nationalities. By implication, the dilution of features of cultures that prevent or limit that goal may be observable? If so, then the incoherent results we see in the Regional Migration Policy amongst others across the entire EU follows (see EUReferendum.com references from OMG !!!! Parakeet invasion). Secondly the rulings of The European Court of Justice (ECJ) also tends towards upholding "Ever Closer Union", effectively ruling in favour of EU Stability as opposed to representing the realities of different nation states already have with each other through culture, history and customs. 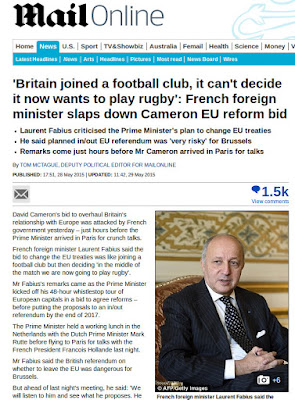 This trend is so easily observed that it's useful to listen to what Pro-EU VIP's sometimes have to say from their equally welcome point of view; a famous quote from French foreign minister Laurent Fabius:-


'Britain joined a football club. They can't now say in the middle of the match that they want to play rugby. It's one thing or the other.'

This quote is very useful analogy to the very clear rules of the EU which are discussed and explicitly focused upon in "BRIEFING PAPER Number 07230, 15 June 2015 - "Ever Closer Union" in the EU Treaties and Court of Justice case law By Vaughne Miller" (google cache av. online). However in the paper despite making clear what "sort of game" the EU Political "Ever Closer Union" is, the advice to modify the game rules for different players is absurd if we hold to the concept of "playing by the same rules".


The highlight of The Bruges Group meeting of the speakers, Owen Paterson, made it clear referencing:-

Namely from my notes of the meeting: The History of the EU founded by Jean Monnet and Arthur Salter from their experiences of the World Wars and the "failure in their eyes" of The League Of Nations to form a Supranational Political Government of Europe to prevent further wars. Hence "Ever Closer Union" is not a "clause that can be simply crossed-out, otherwise you have an entirely different basis of governance. This is backed up by the above "Fundamental Law" applied to members of the EU:-


"This proposal for a Fundamental Law of the European Union is a comprehensive revision of the Treaty of Lisbon (2007). Replacing the existing treaties, it takes a major step towards a federal union"

One of the Concept Shifts that can be introduced is as per Robert Oulds book, the idea of a "Democratic Deficit" concerning the EU. However from Jean Monnet and Arthur Salter's experiences of the League Of Nations where the power of national members Veto's reduced it's role from their Supranational vision, they decided to ensure the voting procedure of the EU would be based on

as per trend from Bruges Group with phasing out of National Vetos, and thus far from being a "defect" it was a "vital function" of Supranationalism. Lost Leonardo (see blogroll) explains the gradual removal of Vetos (as per Monnet's plan all along) via "Engrenage": This is How the EU Works! :- 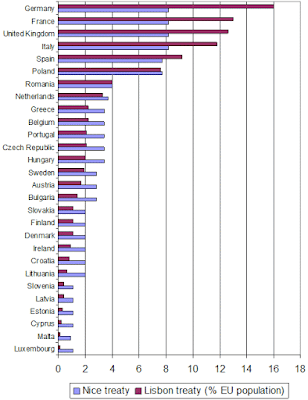 "The proposal was agreed by Qualified Majority Vote (QMV) in the Council of Ministers. This is the essence of supranational (“above the nation”) treaty governance.

This process of engrenage and the supranational governance it empowers is what grants EU institutions the authority to override the democratic nation-states that consent to become (and remain) EU Member States. It is supranationalism that provides the impetus for ever deeper integration; ever more power for the Commission—and the other EU institutions—and the consequent diminution of power among the governments of the Member States, let alone the Parliaments of the Member States, to say nothing of the people who vote in those countries’ ‘democratic’ elections.

The smaller EU member nations are particularly badly served due to the “weighting” that is applied to the EU system of QMV in the Council of Ministers and the European Council, based, as it is, upon the size of the voting country’s population as a proportion of the Union as a whole."

These are the rules of the game. And another Concept Shift is possible aligning the difference between Rugby's Rules and Football's Rules, as per Owen Paterson, the EU is leaving the UK:-

This all demonstrates another Concept Shift, our Referendum on EU Membership:-


Brexit = A Political Event equivalent to The Reformation

And hence some of the Definitions Owen Paterson insisted upon making apply:-

Owen Paterson went on to speak about how only North Korea and Sudan don't have trade agreements with the Single Market (European Economic Area EEA) and therefore by implication of the above, the arguments of what choice we are deciding on is a choice of Which Rules We Choose for Our Governance, I would conclude? The Single Market is not a matter of concern in making this choice.

For Owen Paterson, 3 major areas needed to be delivered in such a renegotiation:-
Owen Paterson made some very useful contributions to the debate, in a very confident and positive manner. He made some clear definitons concerning the EU, Single Market and the context of the Referendum being above party-politics; he made clear that the EU effectively wants to "play by a different set of rules" to what Britain does and this is what defines our renegotiation.

Finally from defining what is the EU? as per the history, as per the current chief rule-makers in Brussels, Owen Paterson offered another Concept Shift of our relationship with the EU and with the World:- 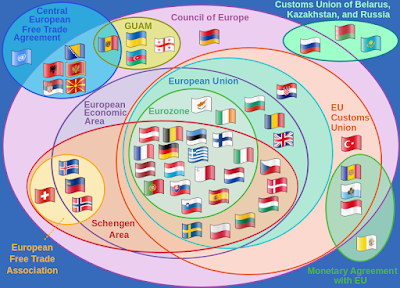 The Supranational EU's Concentric Circles Relationship with the European Nations

The above shows the present "Concentric Circles" of power and loss of influence towards the periphery of the Supranational EUropean Union, as per Pattern Recognition to which Mr. Brexit (see blogroll An Independent Britain) provides an example of our loss of influence/sovereignty/power Remember how we keep being told EU member states are sovereign? and again A central reason why the UK should vote to leave the EU However Owen Paterson provided variety of examples of Global Regulatory Bodies where Britain needs to exert our own influence:- 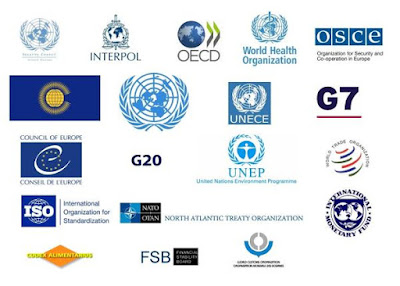 Coming back to Britain's rejection by France's Charles De Gaulle of our application to membership in 1963:-


"It's not a matter of sentiment but of facts and figures."

It is suggested that De Gaulle's real reasons was to ensure that France had acquired sufficient influence for it's farmers before Britain could then later join. And here is a difficulty with the mixture of the Political ambitions of the EU and the effects this has on "group cohesion" and their role as a regional standards body with all European member nations subordinate to the EU, as a consequence. To quote Bismark in 1886:-


"I have always found the word Europe in the mouths of those politicians who were demanding from other powers something that they did not dare demand  in their own name."

Namely there should be a forum free from sentiment, either hostile or sentimental and based on impartial reporting of facts and figures. The problem with the EU's role is European Court of Justice Biased referee? and time and again it's Group Cohesion is being tested it uses the word "Solidarity" or for "Economic Reform" as cloak to "Political Integration": "AN OPTIMISTIC VISION OF A POST-EU UNITED KINGDOM" - Rt Hon Owen Paterson MP

"Nothing more exemplifies the determination to pursue the political project regardless of economics than the manner in which the euro has been supported in breach of treaty provisions. As Christine Lagarde as French Finance Minister said:

“We violated all the rules because we wanted to close ranks and really rescue the euro zone. The Treaty of Lisbon was very straightforward. No bailouts.”

Whatever we think we have agreed to, as long as supreme power is exercised by the European Commission and Court, the rules can be changed after the event.

We have now come to the fork in the road.The Eurozone has to become, in effect, a new country to make a full redistributive federal state where there are legitimate means of transferring funds from the wealth creating areas such as Bavaria, Baden-Württemberg or Noord-Brabant to places like Andalucía, the Mezzogiorno and the Peloponnese where it is simply not possible to create wealth at the rate  at  which their countries joined the Euro. In  order  to make  such  a  shift legally  watertight, particularly with reference to German constitutional arrangements, it is most likely that they will eventually needa new treaty"


It's this "internal logic of the EU Treaties" that drives the Rules they really play by. Not the rules of the real world according to the greater context of Globalization and hence the Concept Shift from a Concentric insular looking EU to a Hierarchical though not subordinate vision of the UK:- 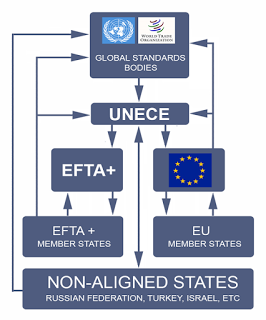 Hierarchical Reconnection with the global world

In The Bruges Group meeting When To Attend/Hold Meetings there was a lot of "conventional wisdom" that no exit plan must be deployed or else divisions in the group would inevitably arise due to everyone holding a "different reason for leaving". And yet, this circular reasoning is quite similar to our Argumentum Ad Infinitum systemic defect of thinking. What needs to be understood is the concepts that arise from the details of research conducted, to reverse Charles De Gaulle's statement on the EU itself, and avoid sentiment but base our choices on facts and figures which define the set of Rules we are to play by with respect to the greater reference to the world and to the EU - and they are very clearly defined (For Example Article 50 TEU Lisbon Treaty): Within this "field of play" we can be certain those rules will be consistent and impartial as befits all good "officiation of rule systems" (Interesting to note the furore over Craig Joubert). All Brexiteers have to start doing is "learning the rules of the game" and then start enjoying playing our role in this global team game:- 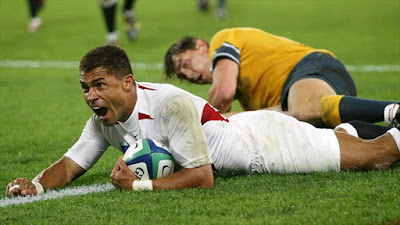 Britain has enjoyed great success exporting it's sports rules around the world!
Posted by Red Cliffs Of Dawlish at 08:39